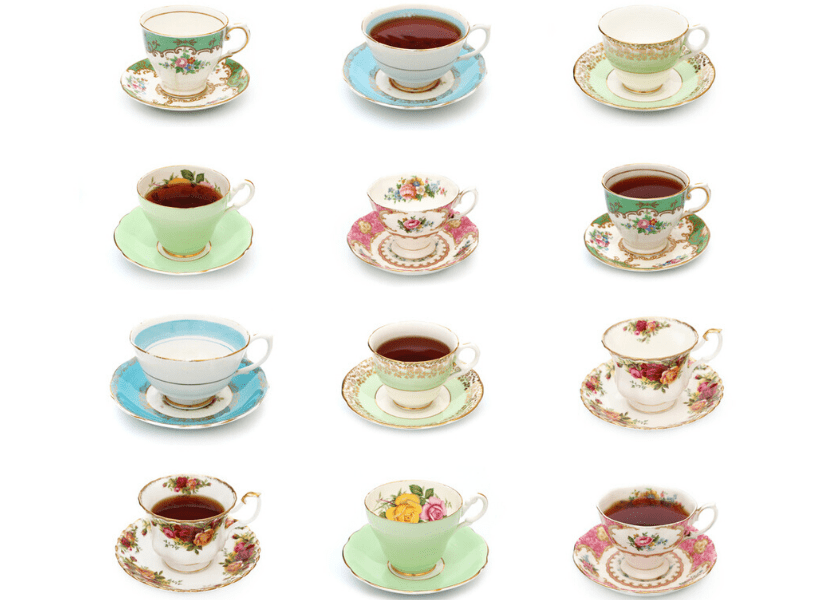 A Quick History of Tea

Fancy traditional afternoon tea? Here is all you need to know!

Tea may have been discovered quite by fortuitous accident in 2737 B.C. The Chinese Emperor Shen Nung, so the tale goes, while boiling some water, accidentally knocked some scorched leaves from an overhanging shrub into the pot. He soon found that they imparted a pleasant aroma and, like all Chinese, an alert gastronome, was intrigued by the brew. The bush was no doubt the handy evergreen known as Camellia sinensis.

On the other hand, it might just have been the venerated Buddhist Mong Dharma who deserves the credit. Having made a vow to maintain a sleepless contemplative state for nine years, Dharma found that, disciplined though he was, he began to grow drowsy. In an effort to stave off sleep he plucked some leaves from a nearby bush, chewed on them and was immediately refreshed. These leaves that proved so powerful a restorative were said by Japanese and Indian believers to be none other than tea.

However it ‘might have been’, by the year 780 A.D. that tea had long ago become an integral part of Chinese everyday life. So elemental, in fact, had the tea-taking become, that the poet-philosopher Lu Yu authored a three-volume treatise entitled Ch’a Ching, devoted entirely to the importance of tea. In the first chapter of his ‘Holy Scripture of Tea’, Lu Yu describes the best quality tea leaves as having “creases like the leathern boot of Tartar Horsemen, a curl like the dewlap of a mighty bullock, unfold like a mist rising out of a ravine, gleam like a lake touched by a zephyr, and to be wet and soft like fine earth newly swept by rain.”

Not to be outdone, the Japanese, by 800 A.D., had their own highly developed tea ceremony that is still practised, virtually unaltered, to this day. Even though Kakura Yakuza’s classic, Book of Tea, was published in 1906 it is, if you’ll pardon the expression, steeped in centuries of tradition. Kakuzo described Teaism as a “cult founded on the adoration of the beautiful among the sordid facts of everyday life.” And he delightfully instructs us that part of the ritual of tea-taking is to “dream of evanescence and linger in the beautiful foolishness of things.”

The European tea ceremony had its earliest beginnings when Dutch traders first began to import tea that they purchased from Chinese “junks” in Java and Sumatra. During the seventeenth century the new brew was exported to France and England. Charles II, returning to England from exile with his new Portuguese Queen, Catherine de Braganza, brought with him the royal yen for team. The regal imprimatur vastly increased the popularity of the beverage. But tea-taking as we know it was still a way off. Back in 1660, when the relentless English diarist Samuel Pepys recorded his first cup of tea, it was mostly probably taken from a bowl in much the same manner that the Chinese still favour. Slurped and savored rather than sipped and civilised. Over 100 years would pass before the creation of the now ubiquitous tea cup and saucer.

By the middle of the next century tea had become the principal beverage in England with exports rising to over 250,000 pounds a year. Tea reigned supreme from dukes to farmworkers to Dr. Johnson, himself a “shameless tea drinker, who for twenty years diluted his meals with only the infusion of the fascinating plant.” As the century drew to a close Londoners had begun to beat a path to the many tea gardens opening in the, then, countryside; Marylebone, Bayswater, Chelsea, Vauxhall, and Hampstead, that offered concerts, fireworks and other entertainments along with tea and refreshments under the arbours of green.

It was around this time that perhaps the most famous of all tea parties took place. The British Government had decided, without the consent of its colony in America, to tax tea imports. And now, in 1773, they further compounded a growing dissatisfaction by allowing the British East India Company a complete monopoly on tea imports in an effort to cut down smuggling and other nefarious means of bypassing the tariff. On the 16th of December of that year, disguised as American Indians, the outraged citizenry of Boston boarded three tea-laden British ships at anchor in the moonlit harbour. With the tomahawks they carried as part of their disguise, they smashed open the chests of tea, dumping the contents overboard. A tea party with revolting results.

In 1823 Charles Bruce, then attached to the Royal Bengal Artillery in Assam, India and an adjunct of the East India Company, discovered indigenous tea plants growing there. Although, at first, India tea was considered inferior to that of China, its cultivation for export got under was after the Great Mutiny that saw the abolishment of the East India Company and direct British rule in India. In 1839 the first Indian teas began to be exported to England, but it wasn’t until the 1860’s that the “tea rush” of fortune hunting planters really took place. By 1878 Ceylon and Indonesia had also emerged as major exporters of tea.

The taking of an afternoon tea that was to become so fashionable a pastime during the mid-nineteenth century, did so thanks to Anna, seventh Duchess of Bedford. It seems that the aristocracy of that splendid time apparently ate but little between a sumptuous breakfast and supper, often served well after eight in the evening. The Duchess, while sojourning at her country estate, the Castle Belvoir, distinctly disliked the faint, failing feeling that she experienced daily around five o’clock. To allay the onset of this well timed malaise she would invite a few friends to her boudoir to partake in tea and cakes. So revitilising did the occasions become that once she had returned to her London townhouse she perpetuated these “afternoon teas” to the delight of all who were invited. And so the tradition was inaugurated.

By the time of the Victorians the array of tea paraphernalia had become vast indeed. Cream and milk jugs, of course, and sugar pots, slop and spoon bowls, a tea caddy (how else would you store the tea), a teapoy (a small three-legged table), a silver tea kettle, dishes, plates, teaspoons and mote spoons, all of which were in addition to the tea pot, cups and saucers. Many of these accouterments, especially the wooden inlaid tea caddies, have become greatly prized by collectors.

Surely as an homage to the ancient ancestry of tea, ‘soft paste’ porcelain, popular during the reign of George III, was decorated with blue and white ‘Chinoiserie’ patterns. These Chinese motifs persisted through the development of English bone china and today the allegorical ‘Willow’ pattern remains the most popular of all the blue and white designs. That is not to say that ever artful European designs did not proliferate. All of the subsequent ‘design periods’ have shown their influences upon tea service from the staid to the whimsical to the downright bizarre. In fact that is just what the Art Deco designer Clarice Cliff called her unique line of tea and table service – ‘Bizarre Ware’.

Employed at A. J. Wilkinson Ltd. at the Newport pottery, Burslem, Clarice Cliff began by transferring printed designs to pots to be fired. By 1928 she had her own studio decorating standard shapes from stock. A year later her first collection was a sell-out. During the next six years Cliff became a celebrity and the entire pottery was given over to the production of Bizarre Ware. Then, as now, these highly coloured, highly individual tea and tableware are highly collectible.

As we practice the tea tradition today we follow most closely the time honoured tenets of Victorian British tea protocol that, with only small modifications, let us home will never change. While the taking of tea is often accompanied by scones, crumpets, clotted cream, Maids of Honour, tea sandwiches, and little pastries, we must always remember that it is the tea and all of its revitalising powers that is supposed to be the main attraction.

Tea time, a proper ‘High Tea’ that is, is a wonderful way to entertain friends at home or out. Increasingly more popular, in these more temperate times, is conducting a business meeting “over tea”.

Facts and Procedures That One Must Know to be a Proper Tea Tippler
There are three basic classifications of tea; Black (or fermented tea), Green (or unfermented tea), and the semi-fermented Oolong teas. All teas are graded according to leaf size; Orange Pekoe, Pekoe and Pekoe Souchong. The most common and widely enjoyed are the Black teas. In a proper tea establishment one should still expect to be asked one’s preference as to India or China tea when ordering. The place of origin is as important to a tea connoisseur as it would be to an oncologist. Just as with fine, complex wines, the soil, climate and altitude of the growing region all influence the taste of the final product. Tea is grown today in China, India, Bangladesh, Sri Lanka, Indonesia, Taiwan, Japan, Turkey, Kenya, the U.S.S.R. and Argentina.

Tea should never be confused with herbals or tisanes which are, of course, infusions and not teas. Fine teas, that is the unbagged, loose leaf of the tea bush, is what is preferred by the perspicacious tea taker.

The Teas
DARJEELING. Known as the “champagne” of the teas, this leaf from the foothills of the Himalayas is perhaps the best known and most commonly served.

KEEMUN. A black tea from China with a delicate flavour, grown in the province of Anhui.

OOLONG. Another China tea, large-leafed and with a flavour often likened to ripe peaches.

ENGLISH BREAKFAST. A blend of Ceylon and India teams, full bodies and well suited to an early morning first cup.

EARLY GREY. The tea purist might draw the line at this blend of China and Darjeelings teas that is fortified by oil of bergamot. Very tasty just the same.

LAPSANG SOUCHUNG. Grown in Fujian province of South China this tea always reminds me of burning tyres. Its taste, however, is not as unpleasant as the smell.

CEYLON. As the name indicates this aromatic tea is grown in the high elevations of Sri Lanka. Nice iced.

RUSSIAN CARAVAN. Once brought by camel caravan to Russia, this tea is a blend of Taiwan and China teas.

GREEN GUNPOWDER. The curled leaves resemble lead shot and the pale coloured tea should be taken without milk or lemon.

CONSTANT COMMENT. Brand name for a tea blend enlivened by orange peel, cloves and spices. It is like drinking Christmas.