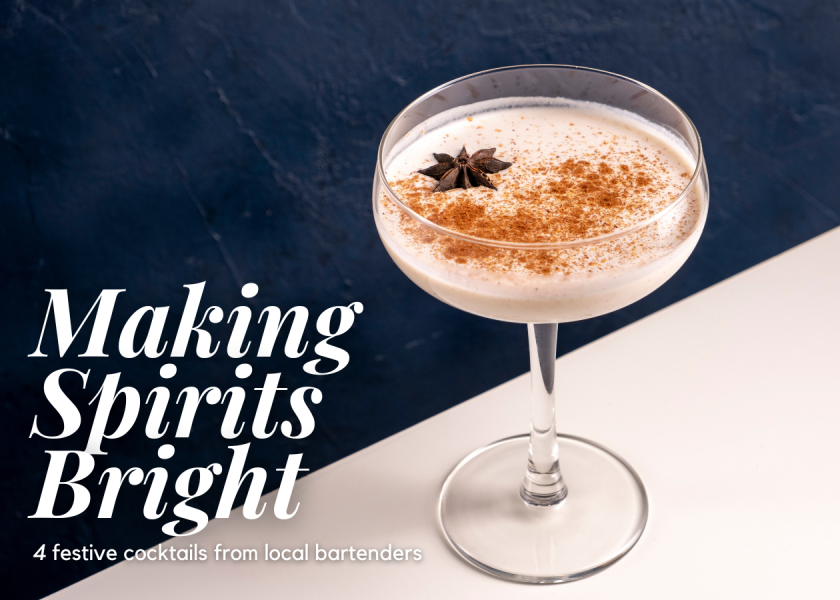 Making Spirits Bright: 4 Festive Holiday Cocktails and Where to Find Them

Come December 1st, locals bars and restaurants are aglow with twinkling lights and festive cheer and some even have special cocktails to celebrate the season. Next time you’re out and about late night shopping, or on the town with friends, stop off and grab a festive drink from Harbourfront, Harry’s, The Loren or Flanagan’s. Made using high-quality Bacardi-owned spirits, we promise, there’s no better way to usher in holiday cheer.

Directions:
Combine all ingredients in a shaker and shake vigorously.
Strain into a chilled martini glass. Top with a liberal sprinkling of nutmeg.

Kenny Foggo’s Bacardi 8 After 8 at The Loren

Directions:
Pour all ingredients into a shaker. Shake well and serve in a martini glass.

Directions:
To the pressure cooker add the wine, cinnamon, cloves, juniper berries, star anise, sugar and apple.
Close the lid and set the valve to pressure cooking position. Electric pressure cookers and stove top pressure cookers: Cook for 1 minute at high pressure.
When time is up, open the pressure cooker with the Normal release – release pressure through the valve (see precautions, below).
Mix the contents well and serve in a glass or mug with a pinch of fresh nutmeg and an orange wedge speared in the glass.
Serve this spiced wine immediately or let it bubble on “Keep Warm” or “Slow Cook” (low) for electric pressure cookers, and very low flame for stovetop during the party to scent the scene and nurture guests.
Don’t use Natural Release, it makes the mulled wine bitter and un-drinkable by keeping the alcohol from evaporating. Natural release basically distils the alcohol into vapor which then condenses onto the lid while to dribble back into the remaining wine “juice” – that’s a total flavor fail.

Pressure Cooking Alcohol & Wine Precautions
Be warned that when you release pressure for a recipe that contains mostly wine, a jet of concentrated alcohol vapor will be exiting the valve.
Before releasing pressure, unplug electric pressure cookers to ensure the heating element does not switch on during pressure release, as it could cause a spark.
NEVER smoke in the vicinity during pressure release.
Remove candles or incense from the vicinity of the pressure cooker.
Turn off all burners from a gas cooktop.
Do not do any activities that can cause sparks.
We do not recommend pressure cooking hard liquor (high-percentage alcohol) at all because it has a low flash point (the temperature at which alcohol will evaporate to form combustible gas). The only exception to this rule is using a tablespoon or two in a cake or dessert recipe that is steamed.
If feasible, move the cooker to a ventilated area to release pressure – do not do this if the cooker’s manual advises you not to.
After pressure is released and the lid is removed from the cooker, just follow normal precautions for handling and cooking with alcoholic beverages. Such as simmering it at very low heat (below 170°F / 75°C) and, unless your plan is to flambé (have the drink or food catch fire), keep open flames or sparks away (as detailed above) until the wine has cooled.

Directions:
Steep tea and pour into cup of choice.
Stir in rum and Baileys and top with whipped cream and sprinkles before serving.

For more on perfecting the art of hosting this holiday season, click here.

For more information about Bacardi Limited and its full portfolio of brands, click here.