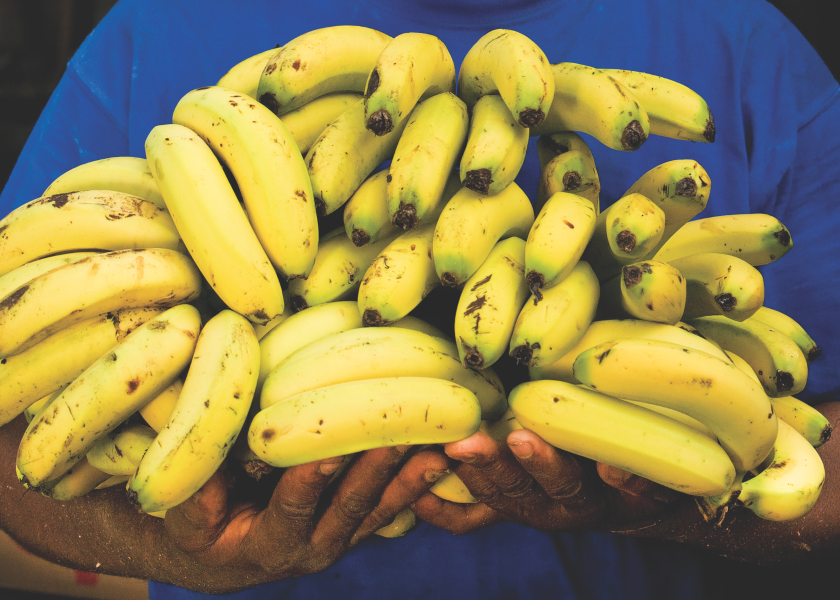 This article was taken from our archives. It first appeared in The Bermudian in Winter 2007. It appears here exactly as it did originally.

Yes, we have plenty of bananas. In fact, in Bermuda we’d go bananas without them. True, they’re not native to Bermuda, having been introduced to the island in the early days of the first settlement in 1616. But they’re very much part of Bermudian culture. What would codfish and potatoes be without bananas? The very idea is unthinkable. And what would life be without the possibility of a banana fritter flambéed in Gosling’s Black Seal rum and topped with whipped cream? Dull and unspeakably dreary.

True, the banana is not endemic to Bermuda but then neither is the longtail. That hasn’t stopped us from adopting it as our national bird, has it? According to Jill Collett’s Bermuda Her Plants and Gardens, 1609 –1850, we were responsible for introducing the banana to England. In 1633 one Thomas Johnson displayed bunches of what were by then called Bermuda bananas in his London shop window. These days, several species are grown on the island including fig, plantain (which also arrived in Bermuda in 1616 and are good fried with bacon), red and strawberry. But the most delicious are the smaller variety called Chinese or Canary Island bananas that hang from the plants like hands of bent fingers, and they are known locally as Bermuda bananas. To be botanical about it, their formal name is musa paradisiacal cavendishii.

The Garden Club’s Bermuda: A Gardener’s Guide tells us they’re not grown from seed but from “sword suckers” planted about six feet apart in a sheltered spot with deep soil. Fertiliser containing a good level of nitrogen is required. As suckers appear, they should be thinned to one fruit-bearing stem and stems four months and three months younger respectively. A newly planted plant takes about 12 to 18 months to bear fruit, but it’s worth the wait for the bananas’ fragrant, fresh taste. However, they should be harvested when they’re still green rather than be left to ripen on the tree. In fact, the government marketing centre has a ripening room where banana growers may bring their bananas to be gassed with ethylene, which has been used since ancient Egyptian times to trigger the ripening process. The bananas arrive on Tuesday and are ready by Friday.

Nutritionally, bananas are excellent because in addition to iron and vitamin B6 they contain three natural sugars—sucrose, fructose and glucose—combined with fibre. Eat just two bananas and they’ll give you enough energy for a strenuous 90-minute workout. They’re also high in potassium but low in sodium and therefore good for controlling high blood pressure.

Bananas have other uses. Dried leaves are useful for crafts, particularly for making Bermuda dolls and angels. And in some other countries the fibre is used for making paper. In the past, Bermudians stuffed mattresses with banana leaves. According to Collett, they would also cut the head of a young tree and use its juice for soothing bad burns.

Rediscover one of the island’s sweetest bounties with the below recipes.

Divide batter among prepared muffin cups, filling each about ¾ full. Bake muffins until tops are pale golden and tester inserted into center comes out with some melted chocolate attached but no crumbs, about 30 minutes. Transfer muffins to rack; cool.

Combine all ingredients in blender. Blend until smooth.

Preheat the oven to 425º F. Line a large roasting tray with the banana leaves, placing them in the tray so that there is a large piece overlapping on all sides. Make sure there are no gaps. (Tip: First warm and soften the leaves over a hot burner on the stove to make them more pliable.)

Sprinkle over the chili, coconut, ginger and coriander, then place the cod—skin side up—on top. Drizzle with olive oil, season with sea salt and squeeze the lime juice over the top. Place the squeezed limes in the tray. Fold the banana leaves over the fish to seal and place something heavy and ovenproof on top to keep in place. Place in the middle of the oven and cook for 25 minutes.

When the fish is ready, remove the skin from each fillet and serve on warmed small squares of banana leaf, spooning the juices over each and sprinkling with the reserved coriander. Cooked rice is a good accompaniment.

In a large skillet, melt the butter. Using a wooden spoon, add brown sugar and stir together. Add the bananas and cook until caramelized on both sides, over medium-high heat. Move pan off heat, add the run and return to the stove to catch a flame from a gas stove or a long lighter. Let flame die down and the alcohol cook out. Serve with a dollop of crème fraiche and fresh berries.