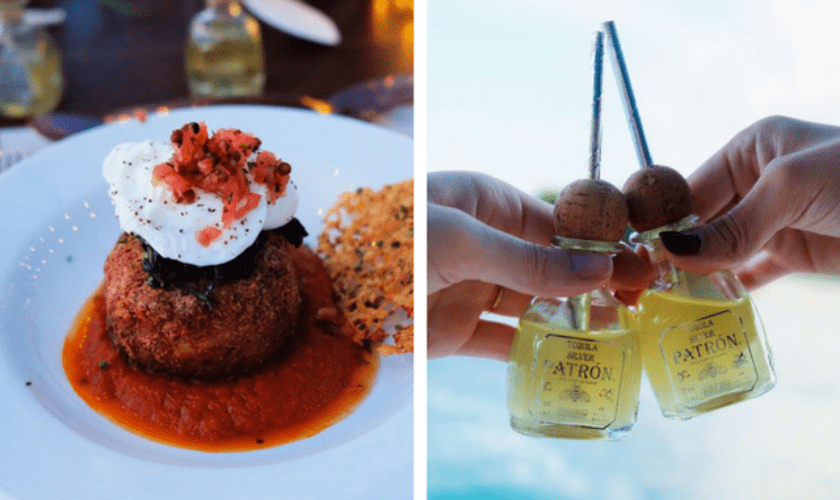 On Saturday evening, under a starry sky, a group of 24 dined on a five-course feast with expertly paired cocktails as part of a secret dining event hosted by celebrated tequila brand, Patrón, in partnership with Gosling’s Limited and Harry’s Restaurant & Bar.

“Gaining entry to Patrón’s Secret Dining Society is a lot like winning the lottery,” says Patrón’s social media manager, Whitney Terrell. The events pop up in select cities across the globe only a handful of times per year. Invitations are scarce, greatly coveted and only divvied out to the top purchasers of the brand (with a particular focus on bar/restaurant owners) and bloggers. Guests are welcomed to an epicurean experience, complete with a never-ending flow of cocktails created by master mixologists and food prepared by high-profile chefs. Indeed, Marcus Samuelsson was the chef for the event when it was hosted in New York City in 2011.

No matter where it is hosted, though there is always an overture of surprise involved with Patrón’s Secret Dining Society dinners. An invitation arrives to your inbox, giving you a date and time to meet but always at a decoy location, set up to confuse, entice and excite. This event’s dummy location was Harry’s Restaurant & Bar.

With no additional information to go on, we met the rest of the lucky group in the early evening. As we anticipated, there was a buzz in the air: Where are we going? Do you know? Have you discovered any of the details? Clad in cocktail dresses and heels, we hoped it wouldn’t involve a trek. Indeed, it didn’t, only a cruise. We were led to the adjacent dock, to a fishing boat equipped with dive gear. With visions of sipping Patrón off the back of the boat à la Jacqueline Bisset, we clambered aboard and set off.

As we cruised along Hamilton Harbour, with the sun sitting low above the West End, we chatted with fellow guests and sipped on margaritas expertly presented in mini bottles of Patrón, each equipped with its own silver straw. Not long after boarding, we entered Paradise Lakes, where the boat started to slow down before docking at Island House, Long Island. As we disembarked from the boat, we took note of lanterns and Patrón bottles marking the path from the dock to the house, as well as an oversized sign with “Patrón Secret Dining Society” written underneath the brand’s iconic bee logo. We had arrived.

With the sun on its way down, we made our way up to a spacious lawn overlooking Bermuda’s famed Great Sound. A long rectangular table took up prominent residence, decorated beautifully with driftwood and succulents. Each place setting marked with another mini Patrón bottle.

As we mingled and enjoyed live music played by Randy Lambert, the strands of bulbs hung high above the dining table glowed and we were asked to be seated for dinner.

April Gosling Naudé and Victoria Esposito of Gosling’s Limited welcomed guests and prefaced the evening with a purpose: Food and drink pairing dinners typically feature wine or beer, but it’s Patrón’s desire to change that. Instead of viewing Patrón as a staple for shots and margaritas, the aim of the Secret Dining Society is to promote synergy between cocktails and food.

This night, chef Gita Kantrow from Harry’s Restaurant & Bar and Miles Market created a five-course menu rich with Bermudian gastronomy and high on innovation and creativity. Harry’s mixologists, Jordan Monkman and Jason Smith had an imaginative and inspired cocktail pairing for each course, each made using Patrón’s brand of tequilas.

The first course, a traditional (albeit large) codfish cake, was accompanied with a hearty tomato sauce, sautéed spinach and a poached egg. For the pairing, Monkman and Smith served up a cocktail dubbed, “Two Amigos” made using Patrón Citronage Mango, Harry’s Rum, lime juice, Dashfire Old Fashioned Bitters and Gosling’s Ginger Beer. The cocktail arrived in a mason jar and proved to be refreshing and full of flavor, a perfect way to set the pace.

Faultless for a summer evening, the second course, a fig salad with candied bacon, mozzarella and balsamic reduction was paired beautifully with the “Fluted Fig”, made with Patrón Anejo, lemon juice, preserved fig agave syrup and prosecco.

The third course was a personal favourite – a delicious, chilled asparagus soup with elderflower cream fraiche and chive oil swirled across the top. As for the pairing? “Siesta”, made using a Patrón Silver, lime juice, simple syrup and orange juice was the perfect drink to sip in-between spoonfuls.

By the time the fifth and final course, a rum cake with coffee caramel, ginger tuile, Devonshire cream, rum gelees and candied walnuts, arrived, the once lively crowd was quieter, having seemingly been lulled into a peaceful state by the four courses before. Appropriately, the last cocktail was “Buenos Noches”, a smooth concoction of Patrón XO Café Dark Cocoa, Patrón Silver, Half N Half, Frangelico and Tia Maria.

After dinner, guests enjoyed mingling on the lawn of Island House, swaying (who wouldn’t after so many cocktails?) to the summer breeze and recounting their favourite dishes and drinks while sipping Gran Patrón Burdeos (a luxury añejo tequila finished in Bordeaux wine barrels).. And after a short boat ride back to Hamilton, the Secret Dining Society was all but a booze-filled dream but a pleasant one worthy of remembering.

Patrón is available for purchase island-wide.