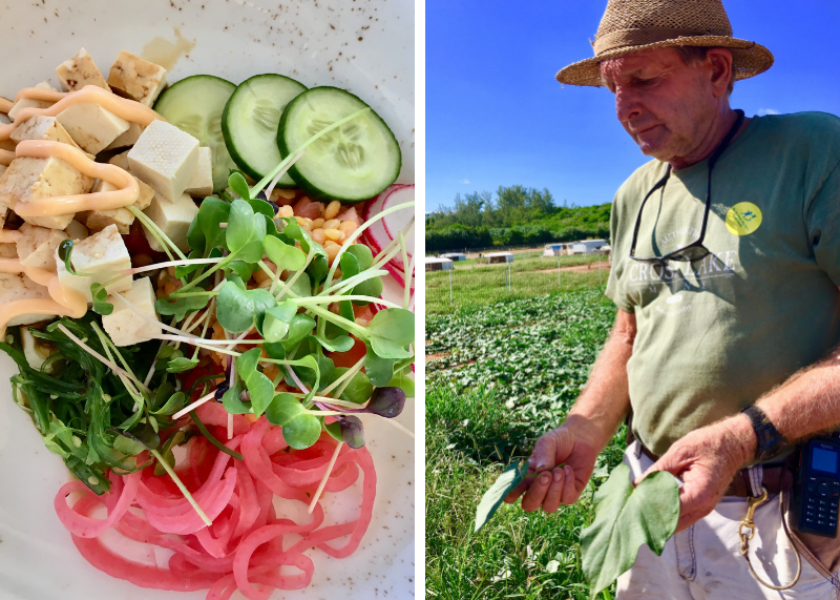 Keeping Cuisine “Down to Earth”

It is unlikely that we will find cattle grazing in Bermuda anytime soon, but that has not stopped the “Farm to Table” concept from taking hold in Bermuda. Restaurants across the island are adopting the practice of serving what is grown and raised locally – on land and at sea, enabling patrons to enjoy fresh, healthy nutritious meals with ingredients native to the Bermuda islands.

Last Friday, chefs at The Loren hosted a culinary experience to unveil their food mission to writers from Bermuda and overseas. With sustainability as their chief focus, their primary goals are to serve locally grown poultry, meat and produce whenever possible, maximize a reliance on seasonal fish, and produce daily menus that utilize what is fresh on a given day, from both farm and sea.

Access to quality food inevitably comes with ‘a price tag’ both for the health and wallets of Bermudians, when local ingredients are not diverse in variety, or nutritional integrity. Just as inner cities in the United States battle higher rates of illness stemming from poor dietary quality, so too has Bermuda placed an over-reliance on food stuffs that are imported on cargo ships, rather grown here on “the rock”.

Foods that must be imported reach the table days later, having been subjected to various hands and modes of preservation. While they may be entirely edible upon arrival, a transatlantic journey will inevitably will rob them of their freshness, and consequently impact flavor.

Chef Tim Sullivan explained his desire to form relationships with farmers and fishermen individually across the island, enabling him to buy direct on any given day, so that he knows precisely how many hands have touched his ingredients. Fish that are imported often arrive with bruised skin, stuffed with ice, he said. Why serve four day old fish, when you can catch it the very same day?

As fish remain a mainstay of Bermudian cuisine, increasing interest is now being directed to local fishing procedures, the cleanliness of operations, and the time from catch to plate. Savvy Chefs craft dishes around fish and shellfish that are readily available locally, rather than serving frozen Wahoo that has been out of the sea for days, weeks or months. This emphasis on “the daily catch” not only sustains a delicious menu, it also sustains the economic outlook for fishermen year-round.

While healthy, fresh, and appealing food should not be a luxury, technically speaking, the emergence of “Farm to Table” cuisine (and its oceanic counterpart) require extra legwork – chefs negotiating daily with local farmers and fisherman, while simultaneously coordinating imports of beef and other meats from distributors in the United States.

While shopping locally for ingredients saves money on freight costs, the attention to detail required by chefs make mass production less viable. Clearly, it is more feasible for a large hotel or establishment to create salads from imported romaine lettuce (for example) than to finely curate one that includes locally grown micro-greens and nasturtiums. This element of refinement requires daily intent, creativity and innovation.

In order to fully understand the intricacies inherent to Bermuda’s farming industry, Chefs Tim Sullivan and Chase Pritchard escorted our group to Wadson’s Farm and BermyFresh- two producers patronized by The Loren for the freshest of ingredients. 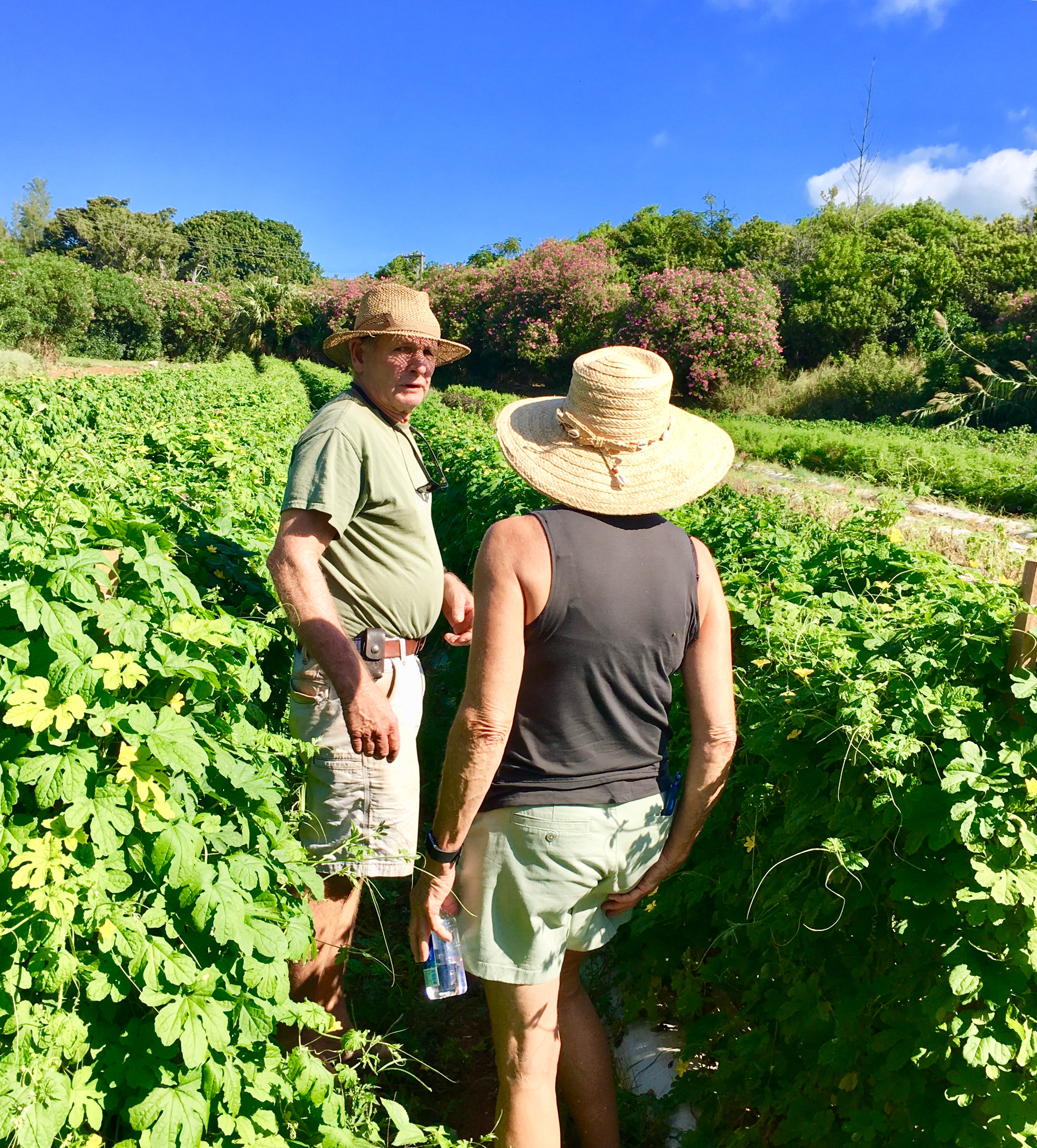 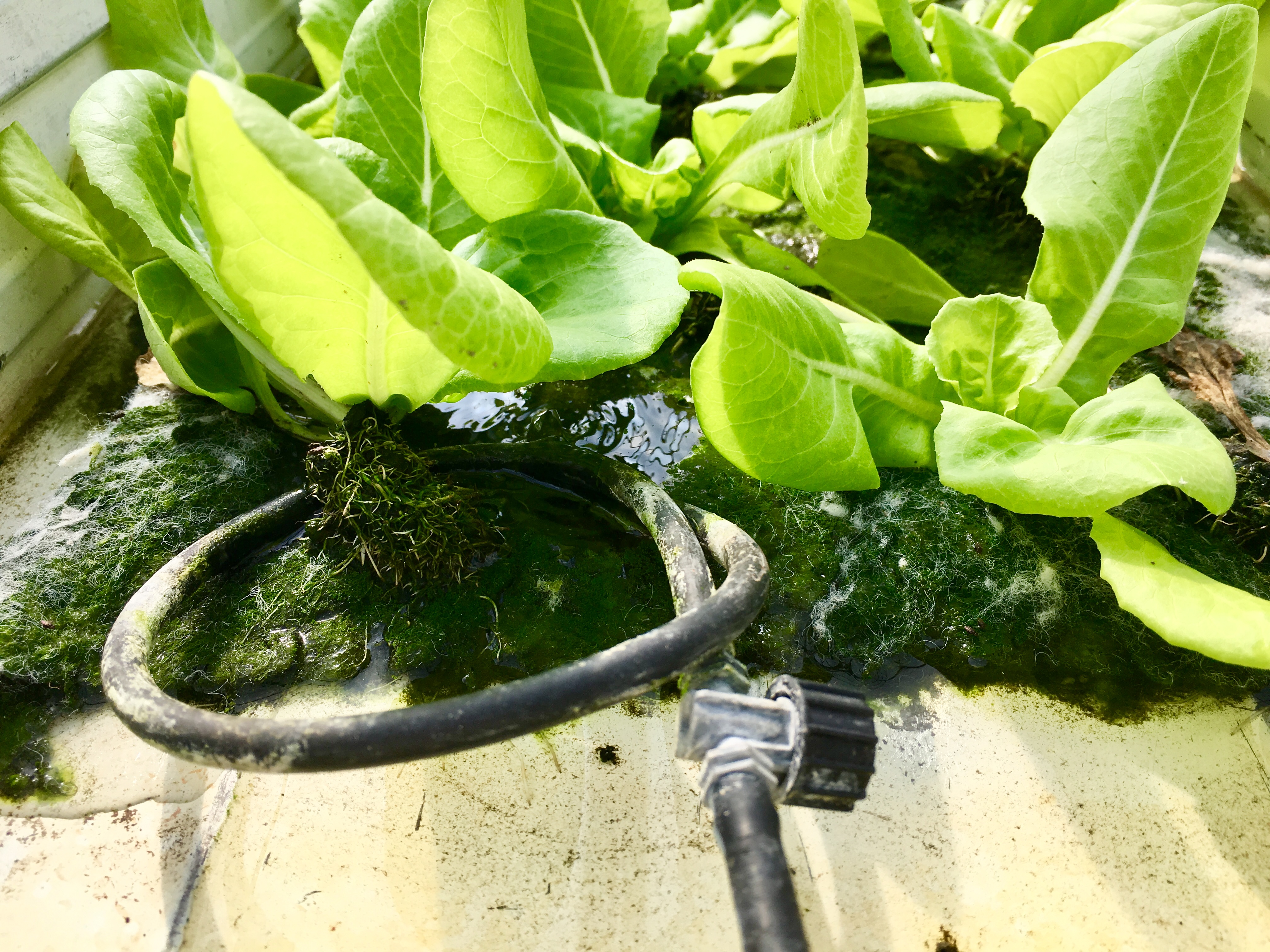 During our tour of Wadson’s Farm, we viewed local vegetable crops and herbs growing side by side, explored the benefits of hydroponic farming (particularly for greens), and discussed Tom Wadson’s poultry production process. He raises chickens, turkeys and hogs for consumption, in addition to hens for farm-fresh eggs. The hundreds of sheep on the property “cut the grass”, he said. 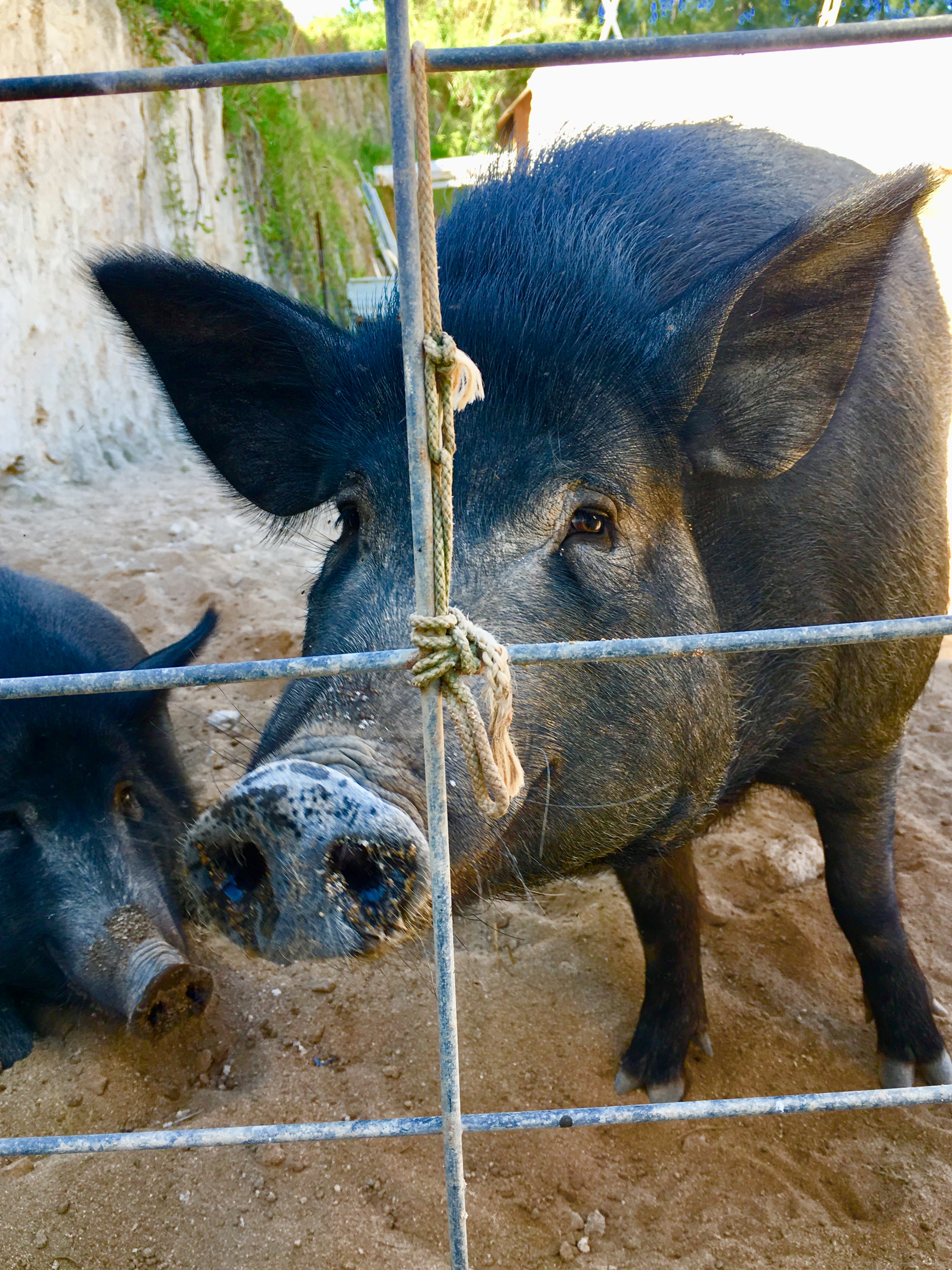 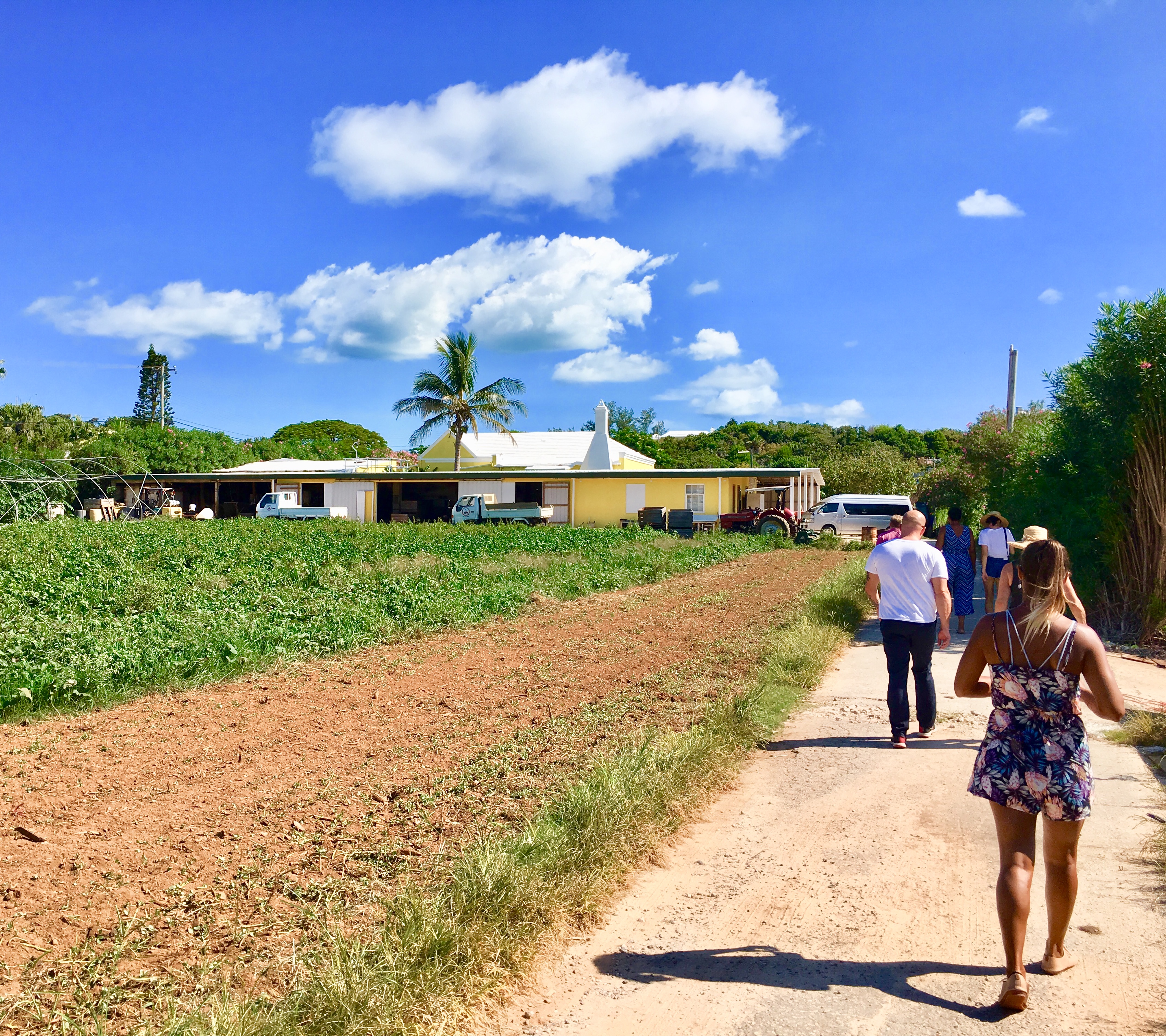 Here in Bermuda, there is no way to gauge what to grow, and what will sell based on a computer model. “The computer is my brain”, Wadson said. Underproduction increases reliance on imports, while overproduction results in waste.

To minimize waste, chefs at The Loren incorporate the entirety of a given vegetable in their daily menu. Root vegetables, such as parsnips, radishes and carrots are prime examples. At The Loren, Chef Chase Pritchard will create a Carrot Top Tabouleh or mix the leafy top of a vegetable with kale and micro-greens into an uber-fresh and healthy salad, eliminating any food waste and producing nutrient-rich fare.

Following our visit to Wadson’s farm, we stopped into Bermy Fresh- a sustainable farm facility located in the most inconspicuous of places- within four walls. Here, we got a closer look at hydroponic farming of lettuces, microgreens and herbs, while also witnessing the most unusual production of beautiful shiitake and oyster Mushrooms in a climate-controlled space. 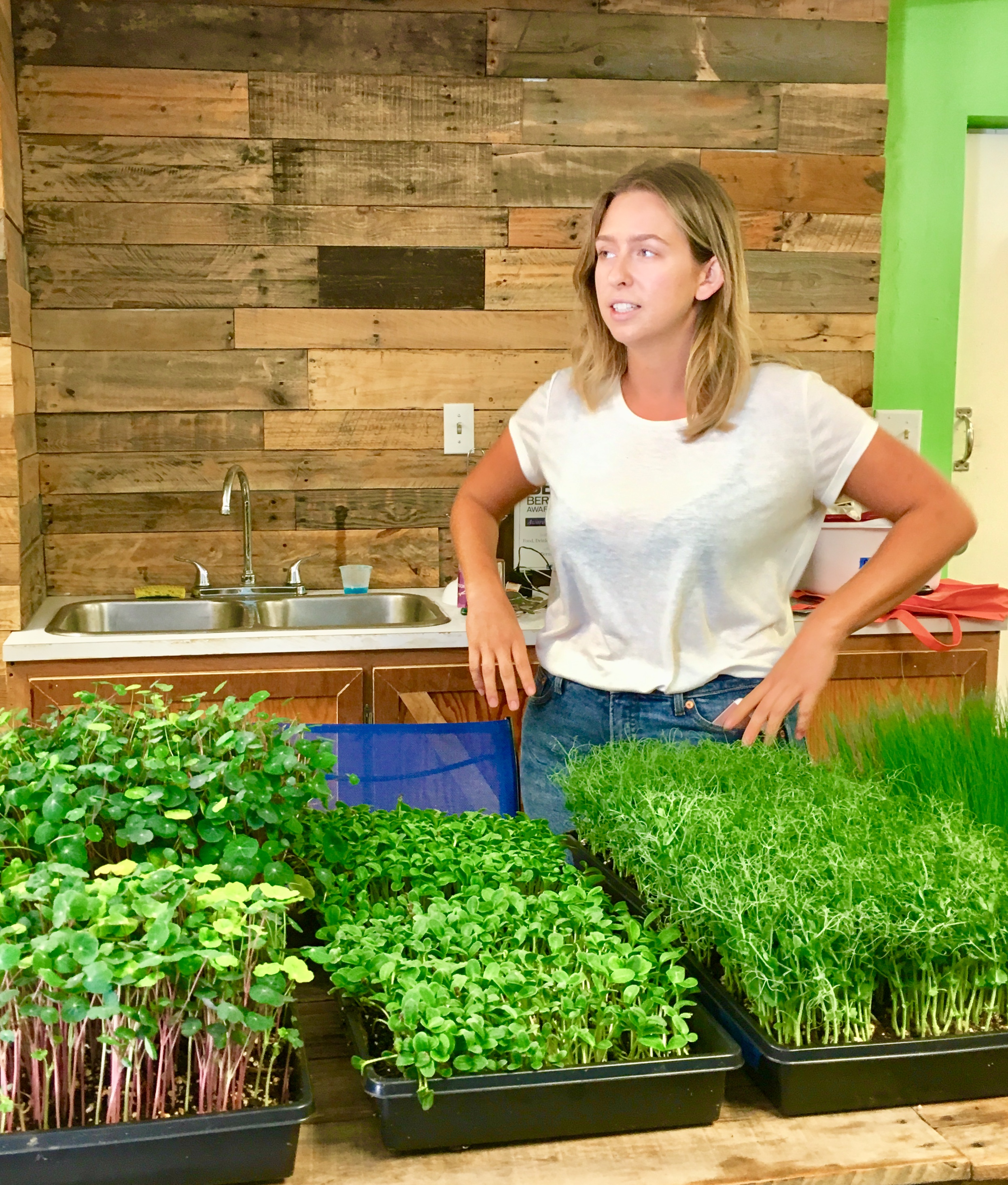 BermyFresh has a limited capability, with regard to meeting demands of every restaurant in Bermuda, yet they do sell to individual clients and can be found in local supermarkets. The Loren is a loyal patron; their “order” was on display, ready to head to Devonshire.

On an island as small as Bermuda, farming poses unique challenges. Although there is “a huge lobby of people who want good food”, according to Tom Wadson, farmers do not have an official advocacy group here – an engine to help them maintain robust production and negotiate environmental regulations put forth by the Government. Local farms rely on the support of the community – both individuals and businesses – to keep them viable.

Back at The Loren for dinner, our group was privy to a menu created by Chefs Tim Sullivan and Chase Pritchard, with the intent to articulate – both visually and gastronomically – the integration of ingredients we had seen and discussed during the day. 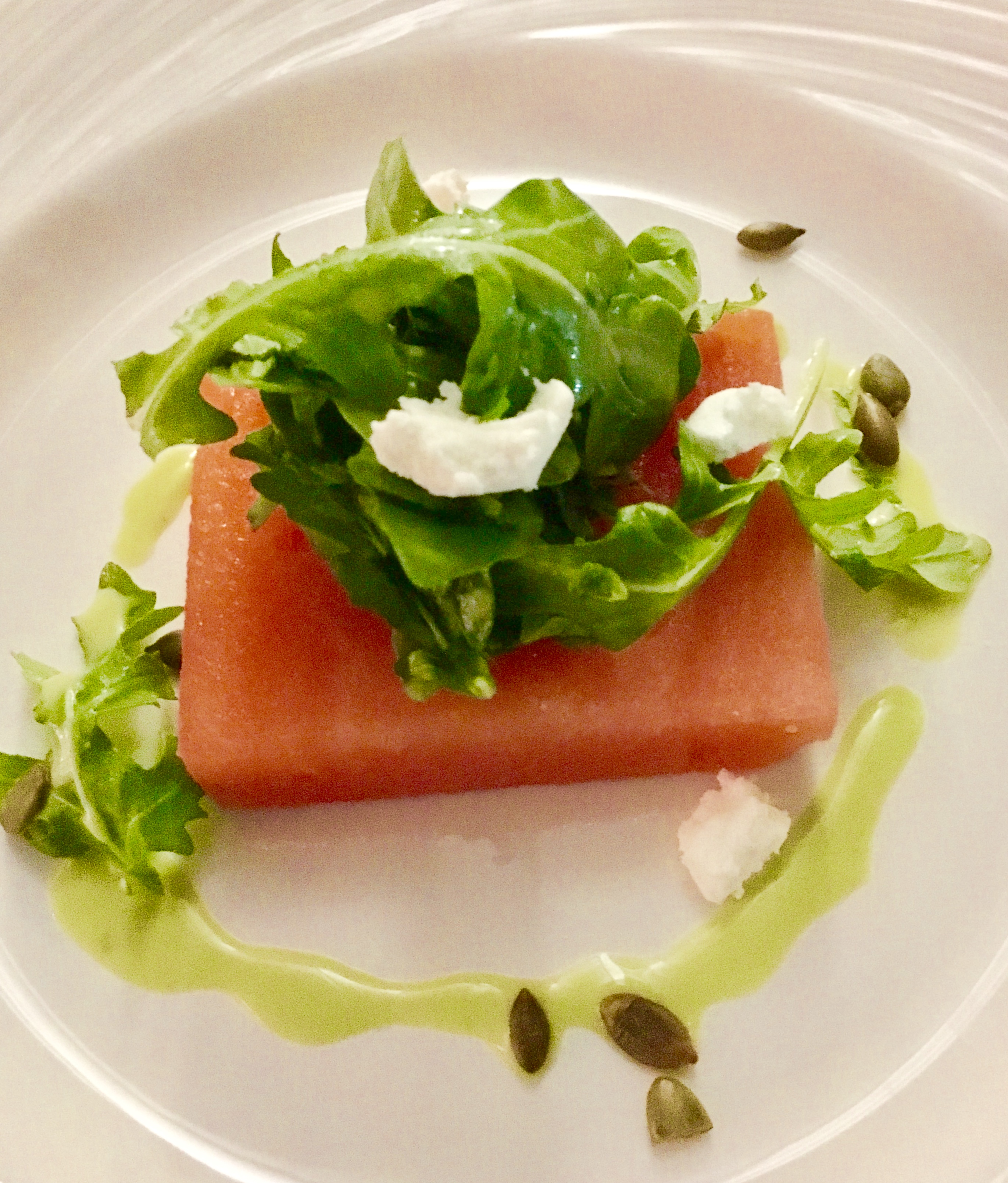 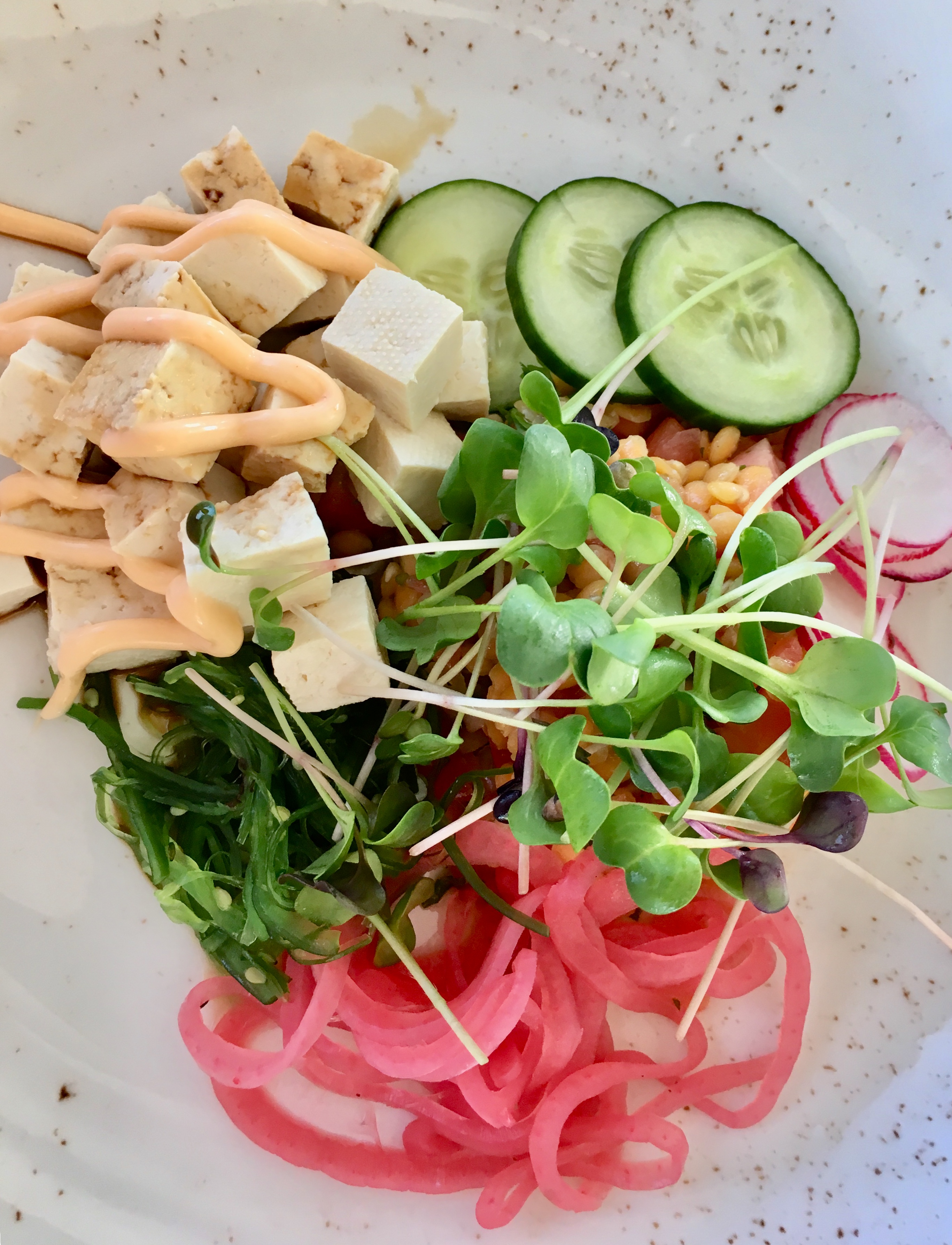 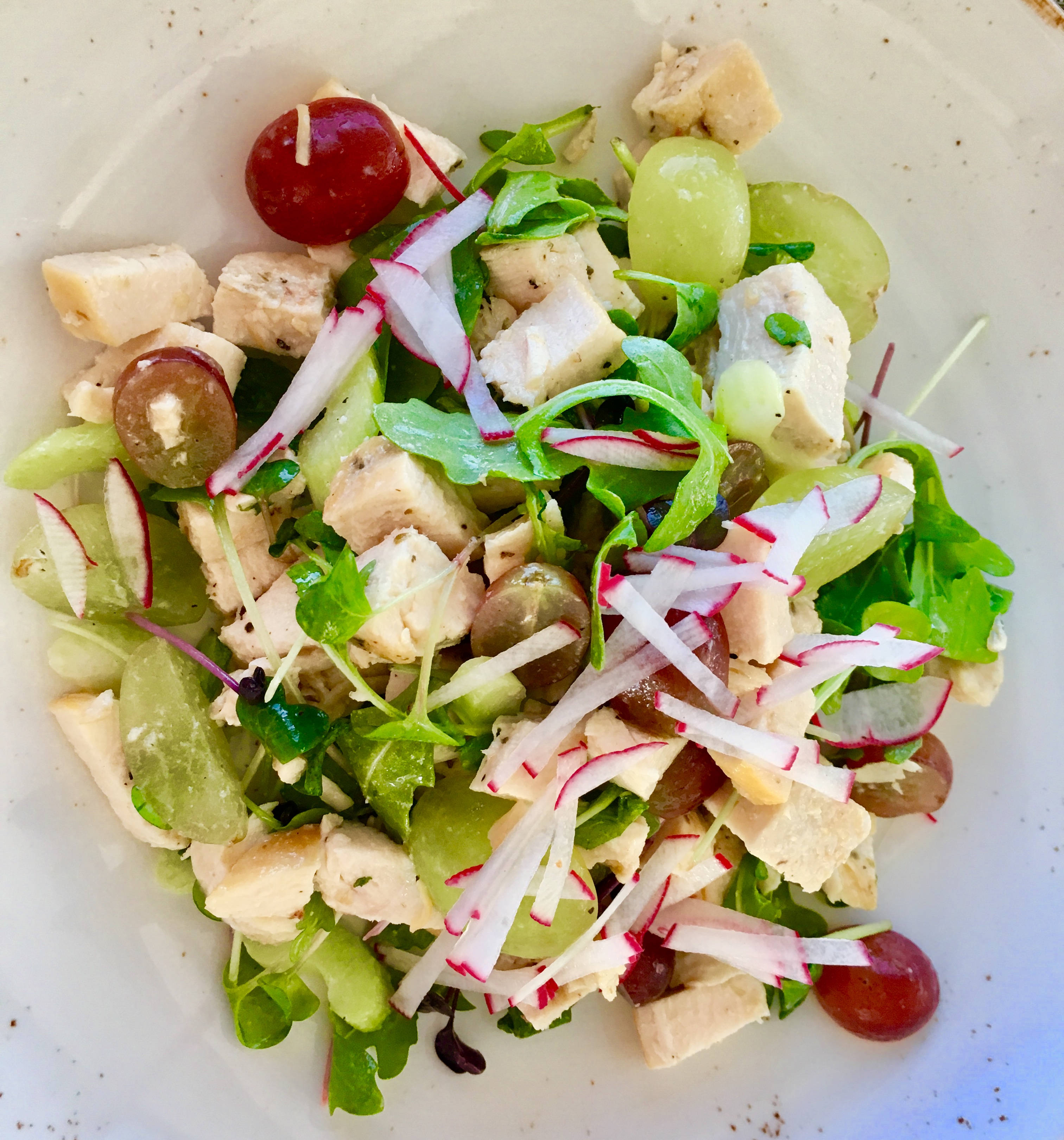 What struck me the most about the preparations were not their raw appeal (all were very delicious in their own right), but rather the subtleties and nuances of flavor brought to bear by the utilization of ingredients that are actually symbiotic.

Simple ingredients, put together, make a dish compelling. One can infuse watermelon with mint, drizzle it with olive oil and serve it with peppery arugula and toasted nuts. Diverse flavors, such as these, illustrate how versatile ingredients are, when in the hands of an artist.

As The Loren moves forward with its culinary mission, its chefs are laser-focused on sustainability, across the board. Aims to decrease a reliance on imports, lower costs of acquiring food, reduce waste and provide the freshest possible Bermudian-grown food are all within reach – all the while sustaining the livelihoods of local farmers and fishermen.

While farm (and sea) to table cuisine may be perceived as a trend that will generate more business from upscale visitors, the interpretations of this method of cooking are absolutely endless, due to the individual style of each chef. Therefore, competition from other restaurants on the island, that have adopted this fruitful concept, is a win-win proposition for everyone in Bermuda.

Our hosts at The Loren hope to spark interest in sustainable cooking in every Bermudian household. Plans are in the works to share this approach beyond the borders of the boutique hotel in the near future – sharing the expertise of how to marry healthy foods and seasonings together in novel ways – enabling local residents to maximize the most of every season’s bounty. 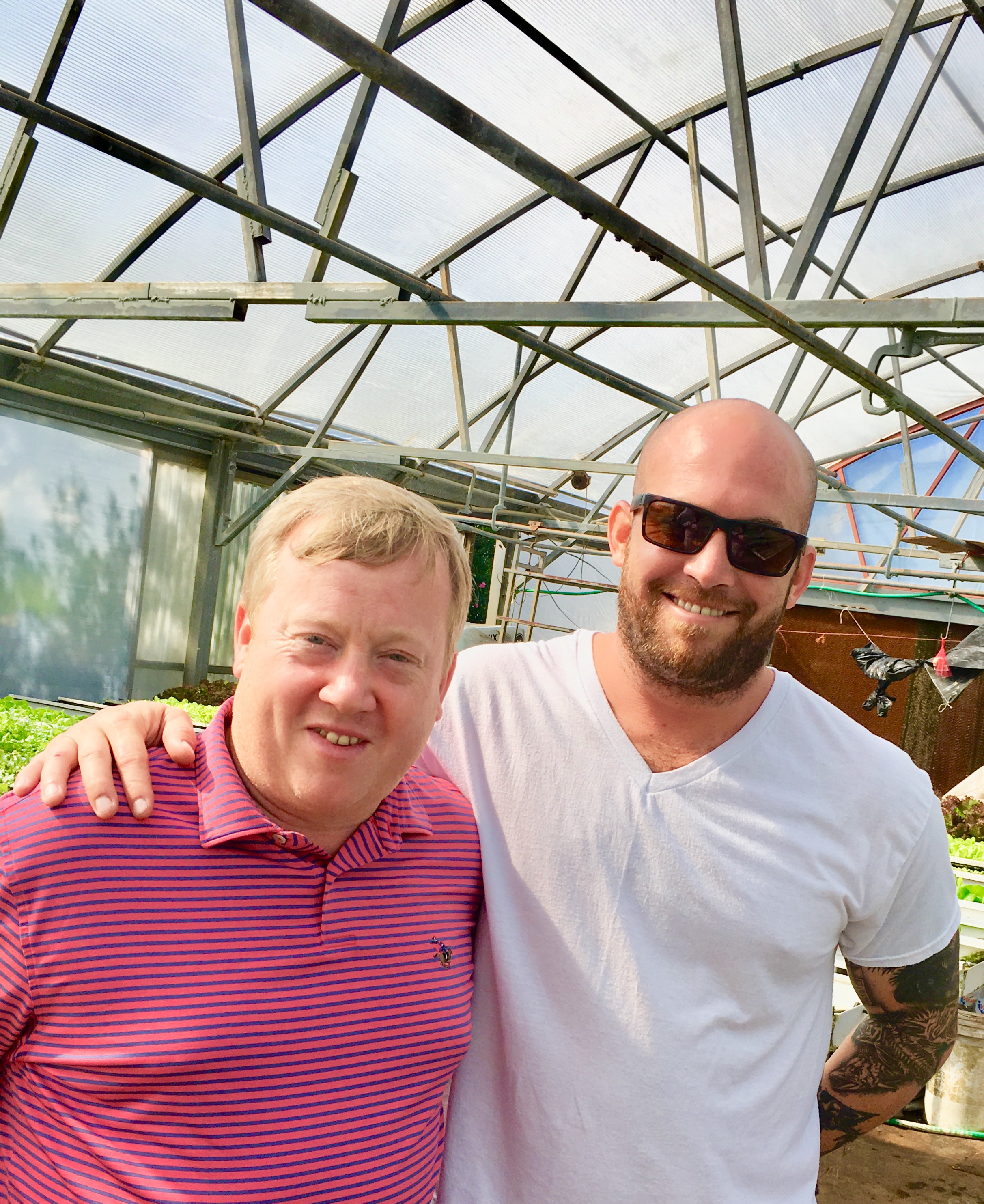 Sullivan and Pritchard believe passionately that eating fresh, nutrient-rich food should not be a luxury. Therefore, however upscale and exclusive their kitchen facilities may be in the posh hotel where they work their magic, one thing will remain certain. The chefs who are calling the culinary shots at The Loren will remain 100% down to earth.