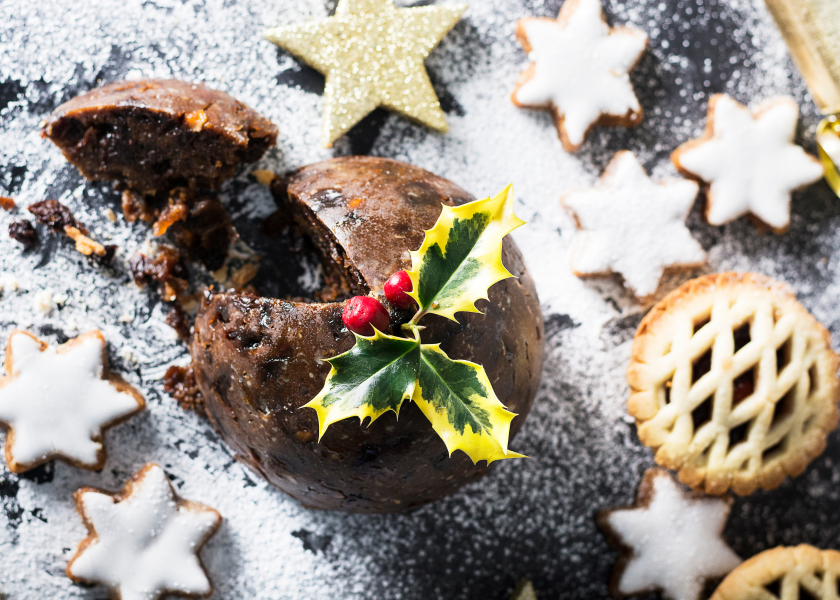 This article was taken from our archives. It comes from the December 1992 issue of The Bermudian. It appears here exactly as it did originally.

One of the many things that this time of year brings to mind is Christmas plum pudding, which as we all know isn’t really a pudding, and does not contain plums. Another certainly is fruitcake which as we all know, isn’t really a cake. Some say the cake-like art of a fruit cake should only be enough to glue together the other sickeningly sweet gooey elements. There are even some, the Curious Cook among them, who think of the fruitcake as an amusing, sometimes hilarious metaphor. And finally there are mincemeat pies, that are not pies but more like pastries, and certainly contain no meat. But since this is the season of fantasy why not indulge in a whim?

All of those howl-able hallowed sweets of the yuletide season share certain common elements: glazed fruits, candied peel, beef suet – just to hear them listed does wonders for one’s appetite. It is these common elements, so many insisted, that yield an uncommon, undeniable flavour of Christmas. And, it must be admitted, they all do have their own folklore-ish history.

Take the fruitcake, What ostensible dessert has laboured long under so poignant a love-hate response. A relationship not so balanced as that may sound. The Curious Cook’s recent, unscientific poll, revealed that only a few love it, may hate it and an alarming number tolerate it – what must account for keeping those mail-order fruitcake makers in business. Part of the giddy dichotomy over fruitcakes surely has something to do with these commercially produced specimens that often bear as much resemblance to the real thing as Madonna does to THE Madonna. But the advent of this cloying confection is not without roots.

The Ancient Romans, who else, had a mixture of barley, raisins, pignoli (or other convenient nuts), and pomegranate seeds that they baked, and then soaked in honeyed wine. They called it satura, and one may assume it to be the earliest known fruitcake. Thespians will take note that the term for the literary and theatrical form Satire – a mixture of sweet and sour – is derived from this sweet and sour cake, the saltura.

It wasn’t until the middle of the seventeenth century that the sweet-­toothed English got a hold of the idea and were turning out ‘plum’ cakes. Plum was actually the term for all dried fruit and the cake in which they appeared, at least, visually resembled the fruitcake with which we are famil­iar. They decorated it with marzipan, almonds and snowy frosting , even holly prigs so appropriate to the season.

While not exactly as all-inspiring as Proust’s plump little Madelaines, fully three-quarters of Truman Capote’s heart breaking tale, A Christmas Memory, is devoted to fruitcake. “It’s fruitcake weather,” is the exclamation that begins the odyssey of the young author-to-be, and his much older cousin, to gather the ingredients to make the holiday cakes. Wisely they mail off the efforts of their labour – thirty-one whiskey-dampened cakes – to others. One can only wonder whether the hastily opened parcels were greeted with a grin or a grinance. Tales have been told in many a family of a venerable fruitcake that has been passed form one relative to the next and back again over generations. No one dare eat the thing, but just the same no one would risk the sacrilege of its destruction.

It is said that that the ubiquitous Christmas pudding began as plum and beef porridge and did not begin to metamorphose until the reign of Queen Anne. Eventually the semi-solid mass established itself as a not-so-special occasional addition to the table. It was a year ’round ‘pud’ so often served that, in 1748 a Swedish visitor to England, one Pehr Kalm remarked that “the art of cooking as practiced by the Englishman does not extend much beyond roast beef and plum pudding.” In 1814 the Frenchman Antoine Beaufilliers wrote of the English delicacy – plomb-putinque, in his L’art du Cuisiner. How it was elevated to a holiday dessert is anyone’s guess. It was, however, the pre-eminent of English novelist of the nineteenth century, Anthony Trollope, who is credited with popularising the term ‘Christmas pudding’ in his tale, Doctor Thorne, in 1858.

The love and fascination for this bizarre arrangement of disparate components is, however, still best conveyed by Charles Dickens in his long-loved Christmas Carol: “…Mrs. Cratchit entered flushed, but smiling proudly, with the pudding like a speckled cannon ball, so hard and firm, blazing in half-a-quartern of ignited brandy, and bed tight with Christmas holly stuck into the top.”

Nearly makes it sound edible. The cannonballs were crooked then, as are many even today, with surprises hidden inside. No, not the death-dealing dose of cholesterol in every bite but silver coins, rings, buttons and things. Surely this might be the only incentive one might use to get the Curious Cook to partake of a dessert that steams for eight hours and then is set ablaze in otherwise perfectly good brandy. The trinkets hidden within are kept from year to year, and are said to foretell the future for those in whose piece of pudding they occur. The coin indicated wealth, the ring, marriage, the thimble, spinsterhood, the button, bachelorhood. Getting the wrong prize sure could take the jingle out of one’s holiday bells.

There is a recipe for mincemeat that dates from the latter decades of the fifteenth century that actually includes meat. “A hare, a pheasant, two partridges, two pigeons, two conies strongly spiced and cooked,” after which it recommends shaping the whole mass into the form of a bird, encasing it in pastry and placing feathers over all. By the seventeenth century, eggs, raisins, and citrus peel were being included more and more with the meat and spices. Pretty soon there was no meat at all. No one, however thought to change the name to minced fruit pie to suit the recipe.

In his Pleasant Conceities of Old Hobson (1607), Richard Johnson writes of those, “cramming their bellies with minced pyes.” As part of the holiday traditions the tireless diarist Samuel Pepys writes of a Twelfth Night feast that included, “a good chine of beef, and other good cheer, eighteen mincepies in a dish, the number of years that he (Sir William Penn) hath been married.”

The stalwart longevity of these gooey traditions could only have occurred in the annals of English gastronomy, that, some say, is a magnificent oxymoron if ever there was one.

Just the same, Christmas would hardly be Christmas without one or all of these on the table. At least to look at. So if you must- here goes.

Put the vanilla, rum, and all of the fruit and fruit preserves in a bowl, give them a whirl, and let it overnight. The next morning prepare to bake. Pre-heat the oven to 300 degrees.
Grease three 9 x 5 x 3-inch loaf pans (or really any pan that will contain the batter).
Add the nut to the fruit-rum mixture.
Cream together the butter and flour until fluffy and light. Add the spices.
Beat together the eggs and sugar until it has thickened well. Fold this mixture into the flour mixture until well blended. Now mix in the fruit and nuts, working until only just combined.
Fill the pans, or pan two-third full, and pat the batter down firmly. Now cover each pan with a layer of alu­minium foil, sealing in the batter.
Bake for two or so hours covered, and an additional 40 minutes uncov­ered, or until the top of the cakes are well browned. Allow the cake to cool completely before turning them out of the pan .
Wrap them in a rum soaked length of cheesecloth and then in aluminium foil.
Store in a cool place, in an airtight container for two week , or longer
(much longer) before serving.
Re-moisten the cheesecloth as required.
Grape, or orange juice may be substituted for a non-alcoholic version.
(Adapted from Paula Peck’s Art of Fine Baking, Fireside Books.)

Something to wash down the cloying confection?

Make a syrup of the sugar and a scant 1/4 cup of water by boiling it for about five minutes. Put on the side to cool.
In the punch bowl mix the red wine, the cointreau, the cassis , port and lemon juice. Stir in the cooled syrup. Chill in the fridge until ready to serve. (Yes, you can do this in a jug and put in the decorative bowl later.)
Just prior to serving add the club soda. Put an orange slice in each cup before ladling.