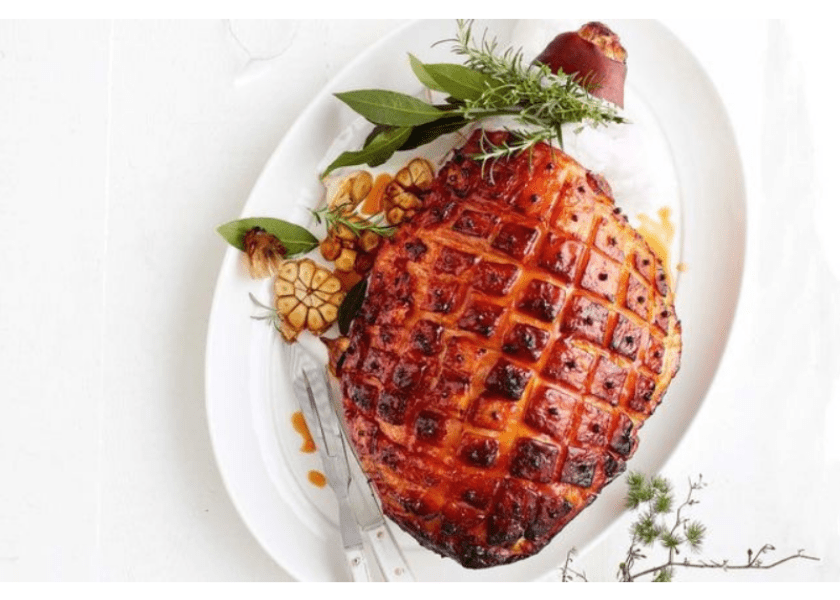 A Bermudian twist on a traditional Christmas favourite!

Directions:
Preheat the oven to 350F. Place an oven shelf in the lowest position and remove the other shelves.
Use a small sharp knife to cut around the ham shank, about 10cm from the end. Run the knife under the rind around the edge of the ham. Carefully lift off the rind in 1 piece, running your fingers between the rind and fat. Wrap the rind in a damp tea towel and use it to store the leftover ham.
Trim excess fat from ham, leaving a 1cm-thick layer. Score the ham in a diamond pattern, about 5mm deep. Stud the centres of the diamonds with the cloves.
Pour 1 cup water into a large roasting pan. Place ham on a wire rack in the pan. Wrap the shank in foil.
To make the glaze, heat the conserve, rum and barbecue sauce in a saucepan over medium heat, stirring often, for 8-10 minutes or until thickened slightly.
Pour half the glaze over ham. Brush over surface to evenly coat. Bake for 30 minutes. Turn pan 180 degrees and roast ham, brushing with glaze every 15 minutes, for a further 1 hour or until ham is deep golden and sticky. Set aside for 15 minutes to rest. Place on a platter. Decorate with bay leaves and rosemary. Remove foil before carving.