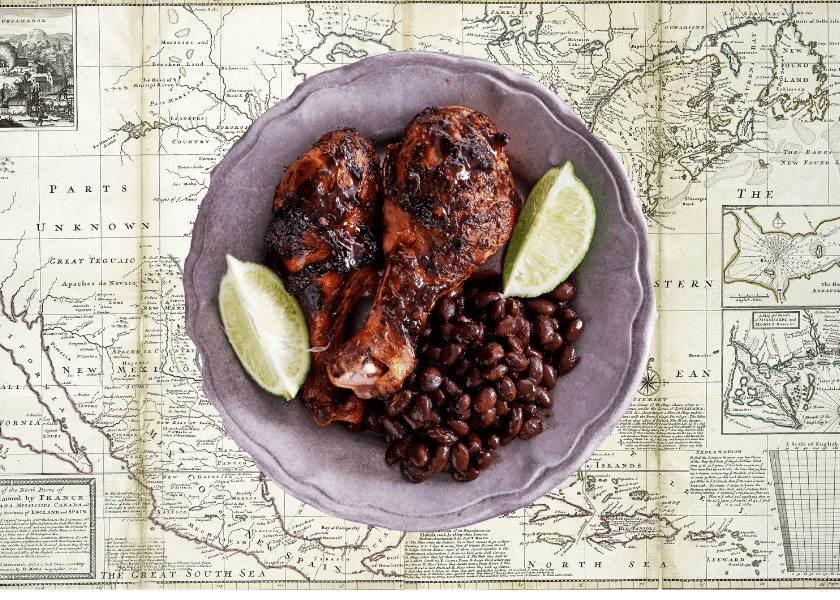 The History and Significance of Jerk Chicken

The History of Jerk
Many Jamaicans will state that Jerk tastes like freedom. Jerk, the traditional Jamaican seasoning for chicken, pork, or beef, where meat is marinated over night than grilled on a smokeless flame, is not just a flavour or spice.  Renowned Jamaican scholar Carolyn Cooper states jerk is the ‘enduring legacy’ of two groups persecuted by the European colonisers of Jamaica. The Taíno, an Arawak people indigenous to Jamaica and the Caribbean, brought close to extinction by the Spanish invaders and the formerly enslaved African “Maroons” who escaped their Spanish and, later British, captors and fled to the mountain ranges of Jamaica’s interior.

As the enslaved population increased in Jamaica, in correlation with the growing sugar trade, so did the rate of maroonage, where enslaved people would flee to the Cockpit County mountain ranges that surrounded the Jamaican plantations. There they settled alongside the few Taínos who had survived the brutality of colonisation and by that point were only residing in this secluded part of the island. Out of this cultural meeting, came the culinary exchanges that gave birth to jerk.

The tradition of cooking jerk on a smokeless grill and the long process of marinating meats to tenderise them are living testaments of the history of slavery and colonialism. These small free populations were still under the constant threat of being discovered therefore could not cook over an open flame, instead created smokeless underground pits. Wild game, hunted and preserved in the mountainous terrain, was often tough and needed much flavoursome coaxing to be transformed into a delicious meal. All these elements make up jerk as we know it today.

Jerk remains the most popular choice of Jamaican cuisine and has reached international notoriety as it spread alongside the Jamaican diaspora.  In Bermuda, some of the most popular local haunts are Jamaican restaurants and Bermuda’s own traditional fare is infused with many of the culinary customs of our Caribbean neighbours.  The importance of highlighting the story of Jerk lies in the necessity of respecting its origins and acknowledging the violent history behind the culinary phenomenon.

Bermuda Jerk Chicken
This recipe is a Bermudian classic. Just make sure you have a frosty pitcher of Dark ‘n’ Stormy on hand to wash down this fiery feast.

Ingredients:
one 5lb or so chicken, cut into eighths (or all thighs, all wings, as you like)

Combine all the ingredients in a food processor and liquefy. Pour into a non-reactive pot and bring to a boil. Simmer for 15-20 minutes until you reach desired thickness. Cool completely. Refrigerate in a clean, snap-lid jar. This paste keeps indefinitely and can be used on chicken, fish, pork and fish.

Wash the chicken in a covered pan (a roasting pan with foil covering will do fine) with the marinade. Bake at 45o degrees for 20 minutes. Lower the heat to 275 and cook for another hour, basting occasionally. Removed from the oven and serve as whole pieces or chopped into smaller pieces as they do ‘down south’ in the Caribbean. Pour some pan juices overall.

Alternatively, grill the chicken at least 6 inches from the hot coals (grilling over smoking pimento wood is the most authentically Jamaican option) . Slow cook the chicken, basting frequently with the leftover marinade. Serve as whole pieces or chopped. Have a frosty pitcher of Dark ‘n’ Stormy on hand to put out the fire.