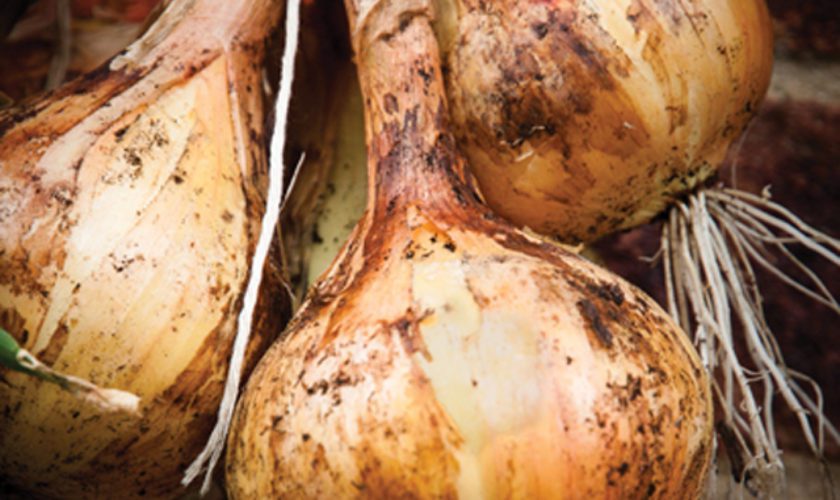 The famous Bermuda onion, popular the world over, is known for its sweet taste and a flavour so mild some say you can eat them like apples!

Although Bermuda farmers no longer produce enough to export, this spring the local variety will crop up in grocery stores and vegetable stands across the island. As the season approaches, we wanted to be sure that you were armed with your onion facts and ready with your recipes, because it would be a crying shame if you missed the opportunity to taste a big, fresh-from-the-garden Bermuda onion whether you like them raw or cooked!

Some Bermuda historians think that there were onion seeds aboard the Sea Venture when it was wrecked off Bermuda in 1609 while sailing from England to Virginia. The seeds may have been planted, but they didn’t survive because they lacked water.

Louisa Hutchings Smith, in her book Bermuda’s Oldest Inhabitants, Tales of Plant Life, says the first record of onion seeds brought to the new colony was in 1616 along with “two watering pots wch we pray lett be used if your season afte sewings be too drye for what of reigned.”

These seeds were imported on the ship Edwin by Governor Daniel Tucker, an enthusiastic farmer.

The seeds grew and onions thrived. In 1762, while sailing from Bermuda to the West Indies, Thomas Parsons wrote, “If our vessels have no very long passages they will clear by ducks and onions no less than three hundred to three hundred and fifty pounds (sterling currency) per trip.”

There were 50 acres of onions under cultivation by 1830 on the tiny 21-square-mile island. In this year, Portuguese labourers from Madeira and the Azores came to Bermuda to farm the land. They brought with them onion seeds that produced an especially mild and delicious variety. The semitropical Bermuda climate and local soil contributed to the vegetable’s distinctive sweet taste.

By 1834, the onion was an important Bermuda export. Although the onion was a hardy plant, its seedlings had to be handled with care. One of the duties of slave children was to keep birds from eating the tiny, pearly-white onion seeds growing in the pods of the flowering onion plants. Being asked to “mind the onion seed” meant running up and down the garden swatting the birds with a palmetto leaf tied to a long stick.

Nellie E. Musson named her book Mind the Onion Seed in memory of her grandmother, who was born 1813 and worked in the onion fields until she was emancipated from slavery in 1834.

Why Bermudians Were  Nicknamed “Onions”

By 1844, Bermuda reported growing 332,735 pounds of onions. The island was extensively exporting these onions by sailing ships to foreign markets. Bermudian merchant seamen became known as “onions,” and Bermuda was nicknamed “the onion patch.”

In 1970, Hartley Watlington, whose ancestors helped settle Bermuda, proved that the nickname was thoroughly established. Eager to sail in the Newport-Bermuda Race, he arrived at the dock in Newport just before the start of the race with a large sign that read “Let an Onion Show You the Way to the Onion Patch.”

A yachtsman seeing the sign invited him to sail on his boat.

In the year 1847, a gentleman in New York wrote to his friend in Bermuda:

I was delighted to see Bermuda fresh vegetables in the Washington Market, and immediately shook hands with the large onions mentioned in last week’s Albion. Bermuda sends her stuff sooner to us in the season than Charleston; so get your steamer going as soon as possible. Tell the Bermuda ladies of every degree that early onions, peas and potatoes will in New York buy silk dresses and satin bonnets.

The barque Pearl, built on White’s Island in 1854 for the Smith-Hutchings family and commanded by Captain Solomon Hutchings, was a swift and admired trading vessel. Manifests show Pearl carried to New York on June 2, 1855, “the largest cargo of native produce ever shipped from these islands.”

It consisted of 134 barrels, 1640 baskets of onions along with potatoes, tomatoes and arrowroot.

Over 4,000 tons of onions were exported in 1875 and the industry continued to flourish until the first World War, when shipping became difficult. After the war trade further declined because of high import tariffs imposed by the United States and because of increased competition from farmers in a town called “Bermuda” Texas.

Today in America, onions that taste similar to the Bermuda onion are grown in Texas, Georgia, California, Washington and Hawaii.

Excerpted from All About Bermuda Onions, by Nancy Valentine

Sauté onions in some olive oil until golden. Cool. Mash anchovy fillets with a fork and combine with Dijon mustard. Spread combination on pastry dough. Add onions and 2/3 of the cheese. Slice tomatoes and arrange in circles on the tart. Season with salt and pepper and add the remainder of the cheese. Top with sliced olives and asparagus tips, drizzle with olive oil. Bake in preheated 375º oven for 30 minutes.

Bring a pot of salted water to boil over high heat. Add the beans and cook for about 5 minutes. Beans should be crisp. Drain the beans and run them under cold water to stop them from cooking. Cook the pancetta in a skillet in a drizzle of olive oil until crisp. Drain on paper towel. Return the skillet to high heat heating pancetta oil and remaining olive oil. When oil is hot, but not smoking, reduce heat to medium high and add the onions. Season with salt and pepper and cook slowly turning with spatula every 8 minutes or so. If necessary add more oil and cook until onions are caramelized about 25 to 30 minutes. Toss cooled green beans, pancetta and caramelized onions together and serve.

Salt and pepper to taste

Preheat oven to 475º. Place halved Bermuda onions in centre of small casserole dish. Surround with Bermuda cherry tomatoes. Season tomatoes with fresh rosemar
y or dried oregano. Drizzle tomatoes and onions with olive oil. Season both tomatoes and onions with salt and pepper. Place in preheated oven and bake for 15 minutes. Blend mayonnaise and cumin seed. Switch oven heat to high broil. Allow to broil until tops start to brown. Remove and spread mayonnaise mixture over onions and place back in oven for additional 2 to 3 minutes until topping is bubbling and brown.