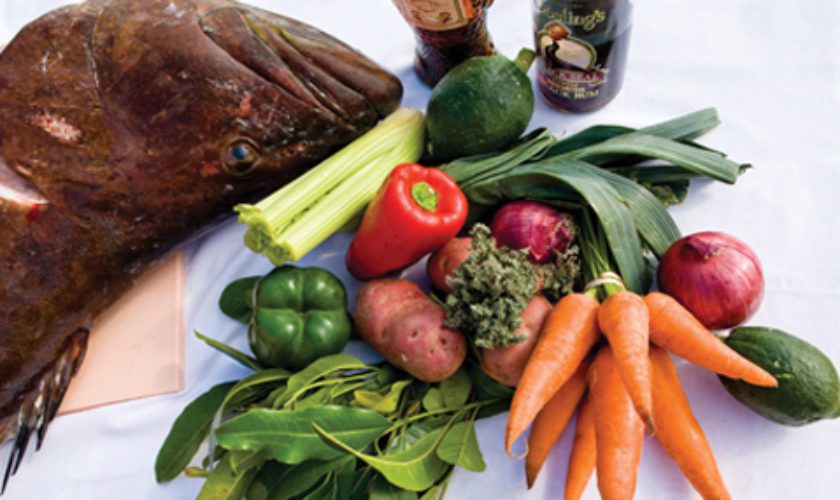 I love fish chowder. There’s something about that ruddy-brown concoction that plucks at every one of my Bermudian heartstrings. Everything good about island life – the pink sand, the blue skies, the water like Gatorade Frost – comes bubbling to the surface in that turbid bowl of Bermudian bouillabaisse. All else melts away like butter in a lobster bisque.
It’s easy to be cynical about Bermuda these days – I’ll be the first to admit it – but it’s nice to counteract the cynicism with a nice steaming bowl of sentimentality. And what better dish to get all mushy and love-struck over than Bermuda’s national chowder? For the poetically inclined, one might find within every bowl of fish chowder a salubrious reminder of our mid-Atlantic heritage. Each spoonful reminds us how so much yet so little has changed since the first bowl was served on our shores some 400 years ago.

A Brief History
Legend has it that fish chowder was invented on the beaches of St. George’s, in cauldrons placed above bonfires, around which everyone sat, presumably, to drink and talk at the end of the day. Fish chowder was provincial in its make-up: it used meat stock instead of milk (which can spoil), simple root vegetables (they were the few crops Bermuda’s farming environment could support) sherry peppers (known for their preservative qualities) and, of course, fish. Anthropologically, fish chowder hints at a people making the best of what they had, especially the sea.

Four hundred years down the road it seems almost every Bermudian family has a recipe for fish chowder that they swear will have you questioning your very existence, or at the very least force out of you an irrepressible “Chingas” or “Mercy” or “Oh my gracious!” It’s a matter of patriotism, really. We should and do take great pride in knowing how to cook a killer fish chowder, and while we’ll inevitably argue over the finer points, most will agree on four essentials:

Fish heads. The texture of the fish is of the utmost importance in such a light chowder. Meat from the head is tender and flaky. Tradition and general consensus call for rockfish heads, but fresh rockfish isn’t always available, in which case tuna, porgy or snapper is preferred.

Water. Consistency is essential. The right amount of water should make the chowder light enough to eat comfortably on a hot day. It shouldn’t stick to your ribs like other chowders do; it is meant to be light.

Time and thyme. Most recipes use a wide variety of root vegetables – onions, celery, green peppers, carrots, potatoes, turnips – plus tomatoes, garlic and ketchup or tomato puree. Add a handful of seasonings such as thyme, bay leaves, cloves, marjoram, curry powder, cinnamon, salt and pepper. Tradition dictates that these ingredients must simmer for two and a half days so flavours mingle and amplify each other.

Friends. Serve, greeze and be merry. Should I ever find a burning bush and some blank tablets atop Wreck Hill, my first commandment would be “Ye good Bermudians shall make only the wellest of fish chowders, and when this is done ye shall invite all thine ace-boys and ace-girls around thine gates, pitch a hot and have a serious feast.”
But what is the secret to truly great fish chowder? Like the epics of Homer and Virgil – with considerably more um-um-ing and aungh-ing – secret fish-chowder recipes tend to be handed down the generations by word-of-mouth, never to be shared outside the family circle. These days there is not much need for secrets. The general recipe has been perfected. So while there is certainly a cachet attached to whose chowder is the best, the fact is you can find a perfectly spectacular bowl at most restaurants across the island. Many are more than willing to share their recipe.
I visited five of these restaurants recently with the aim of seeing if it’s even possible to determine which one has the best recipe. While this is in no way a Best of Bermuda contest, the restaurants have been chosen based on their reputation for producing high-quality, suck-ya-teeth, call-and-tell-ya-deddy fish chowder.

Beau Rivage
Rating: Chingas! (times two)
A gastronomic jewel in Newstead’s crown, Beau Rivage has become the preferred haunt of Bermuda’s minted ladies-who-lunch. Yet despite this figure-conscious clientele, the fish chowder ($10) comes in a rather comically American-sized bowl. As an appetizer, it’s too much, but alongside a salad or an order of crab cakes it serves as a fine entree. The chowder itself features a liberal helping of tomato puree that makes it heavier than normal and gives it a dark brown hue, but it also sets it apart in taste as a unique, joyously aromatic and lip-smacking rendition of your classic fish chowder.

Barracuda Bar & Grill/Hog Penny
Rating: Oh my gracious! (times three)
Everything about Barracuda Bar & Grill reeks of middle-class smart-casual, yet it somehow manages to dodge any bourgeois formalities. The waiters are well trained, well dressed and well versed in the delicate art of being chatty without being garrulous – an increasingly rare characteristic, I find. The bar is lavish but not haughty. The seating is formal but not staid. If you’ve got the time and money, it’s the sort of place where you could proceed to get seriously besotted in a nice tie and some loafers, and nobody would bat an eyelash. In other words, my kind of place.
Even the fish chowder manages to strike this balance, starting with the $9.50 pricing. Light, creamy and accompanied by fresh rolls and a side of superb hummus, the chowder at Hog Penny and Barracuda Grill has long been praised by locals and, presumably, Hog Penny’s in-house entertainer, Will Black. It differs from other chowders in that they use shellfish stock as a base; when mixed with rum and sherry peppers, it takes on a certain complexity I didn’t find anywhere else. I’d recommend having it with a pint or seven of Newcastle Brown Ale.

Harry’s
Rating: Laudamercy! (times three)
For yippies (young island professionals), there really isn’t a better choice than Harry’s. Harry’s sets itself apart from other chowder-serving joints with a selection of artisan beers from around the world, starting at $8 and ending at an eye-watering $25. Diced root vegetables are added to a dark-brown stock with blended fresh fish – whatever is in season – and the chowder is left to simmer for a minimum of three hours. The appeal, however, tends to fade toward the end of the bowl, the same phenomenon I experienced at Beau Rivage. It is a heavy fish chowder ($10) and delightfully complex, but the broth dwindles quickly – shame for any fish-chowder lover.

Lobster Pot
Rating: Chingas! Laudamercy! (times three)
I have to admit, I was expecting fireworks from the perennial winner of this magazine’s Best of Bermuda award in fish chowder. I can’t say I was disappointed. This is, without question, an award-winning fish chowder, and at $7 it’s a certifiable steal, but for such a venerated repast it lacked the adventure I was craving. Lobster Pot offers a safe and exceptionally good recipe, perhaps too good, almost predictable. It is the Big Mac of Bermuda, which is certainly not a bad thing. Loss aversion – the marketing idea that customers will order a meal they know will taste good as opposed to something they’ve never tried – is what makes McDonald’s a fast-food powerhouse. Loss aversion also makes Lobster Pot’s fish chowder so exceptional; it will always taste spectacular.
Perfectly proportioned with an alluring reddish-brown colour, it is a fish-chowder icon. All it lacks is surprise.

Wahoo’s Patio & Grill
Rating: Ch
ingas! Laudamercy!
Oh my goodness gracious! (times five)
If real Bermudian fish chowder is to be had anywhere on the island, it should be on a quiet St. George’s side street, with only a pint for company. Without getting overly romantic, there’s something about the hushed history of this place that kindles the spirit and leaves you with the feeling that you’re not the first to enjoy a quiet fish chowder on your own.
The dish uses blended fresh fish and liberal, crunchy slices of celery along with the other standard veggies. It came served with a side of Saltines, which surprised me and added great texture. I really couldn’t differentiate between the chowder at Wahoo’s and the chowder at Lobster Pot, but it wins on tradition. Whether or not the story of fishermen creating fish chowder on the beaches of St. George’s is true, the Olde Towne seems the most appropriate of settings for enjoying a bowl.

We’ll never know how many times fish chowder has been served over the years, and we’ll never agree on which one is best. In the end – at least in my mind – no fish chowder can ever be better or more worthy than the next. Each bowl is the combined effort of all those that came before it.