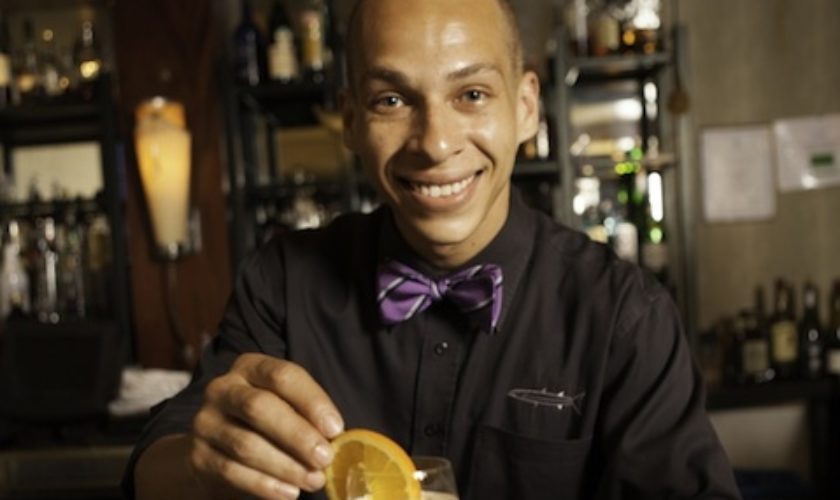 Here’s to The Bermudian! A Celebratory Cocktail by Bermuda’s Best Bartender, Ryan Gibbons

Voted the island’s best bartender in the 2014 Best of Bermuda Awards for a second consecutive year, the versatile and talented Ryan Gibbons mixes up The Bermudian’s eponymous entry into the cocktail world.

There is no task is too small, no demand too outlandish when Ryan Gibbons is behind the bar at Barracuda Grill in Hamilton. By the time we approached the 28-year-old with the not-so-straightforward task of creating a cocktail that encapsulated Bermuda, he was already well practised at reproducing within a glass the demands of whimsical palates such as ours.

Jellies, jams, exotic bitters and popcorn, Gibbons has had customers ask for just about everything mixed into a cocktail when he’s serving. Most of the time, he says, he delivers, like when one guest became thirsty for the ever-refreshing taste of Walker’s Cheese and Onion potato chips.

“I couldn’t make them fast enough,” says Gibbons, a graduate of the bartender training programme at Bermuda College. “I muddled white cheddar with pearl onions and a gherkin, added some gin, passed it through a fine strainer and garnished it with little cheddar-stuffed pickled onions. Strangest drink yet, but at least the guest liked it.”

Having worked in the hospitality industry in various capacities since 2003, Gibbons says bartending allows him to express himself artistically through a liquid medium, while working in a dynamic and challenging environment that requires just as much problem solving and rational thinking as it does artisanal creativity.

Although offers have come from overseas, Gibbons says he’s “always felt a responsibility to help Bermuda’s bar and hospitality services move in a positive direction.

“It was my pleasure to be given the opportunity to create an exclusive cocktail for The Bermudian and a very pleasant surprise to be awarded best bartender for the second time now.”

“In creating The Bermudian, I immediately thought of togetherness,” says Gibbons. “It may sound cliché but that was where I went.”

“I thought about my family, Sunday dinners, about my Meme’s many baked goods and climbing in the loquat trees next to my Nana’s house. I thought about why it was I left the island in the first place, and what it was that drew me back and has kept me here: family and togetherness.”

While Gosling’s Black Seal rum would be the obvious choice, Gibbons chose to use an item exclusive to Bermuda, Bermuda Gold loquat liqueur.

“With Bacardi International being centred here in Bermuda and the Gosling family’s deep history in spirits in Bermuda, I wanted to bring them both together. I chose Bacardi Oakheart spice rum as my main spirit for its brown sugar and vanilla flavours.

“I didn’t want just to throw those ingredients into a shaker because on their own it’s quite thin. So in the spirit of binding and togetherness I added the egg white and went with a sour-based cocktail for this shot, lemonade days.”

The elaborate drink won’t be on any cocktail menu, but that doesn’t mean Gibbons won’t make it for you. Just head to the Barracuda Grill on Burnaby Street, and ask for The Bermudian.

2. Separate the egg white into a glass, ensuring there is no eggshell in contact or in the glass.

3. Add the lemon juice and sugar and give a gentle whisk for about five seconds.

4. Add the remaining ingredients and one of the lemon halves you kept.

5. Take the shaker and glass, make a firm seal and shake dry. (“I did it like a Ramos Fizz so good hard 21 seconds dry shake, more if you’ve got it,” says Gibbons.)

6. Add ice to the shaker and continue shaking for at least a minute more.

7. Pour into a large wine or hurricane glass.

8. Pour soda water into the shaker and scoop the remaining foam proud into the glass.

9. Garnish with orange wheel and sprinkling of nutmeg.