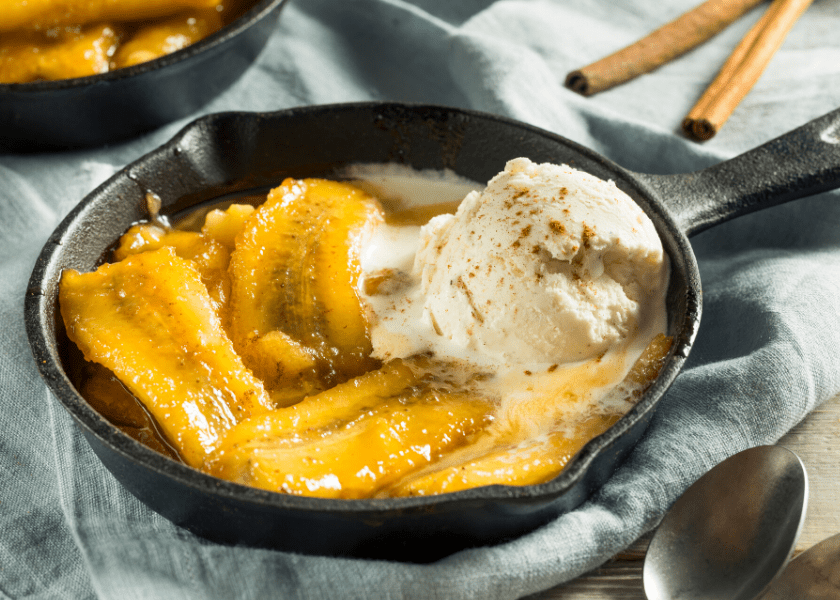 Rum has long been synonymous with festive drinks and warm, sunny islands. But its sweet, sugary base has over time easily extended itself to become an integral addition to a host of delicious desserts.

This spirit has also made its way into savoury dishes – particularly Asian-based sauces that require a balance of sweetness with salty ingredients, such as soy sauce.

An all-purpose rum glaze marries well with oven-baked ribs or chicken thighs. It is always a winning combination and an easy dinner option when served alongside a salad. Simply blend one cup of Bermuda honey, 1/2 cup each of rum, fresh lemon juice and Worcester sauce and 1/3 cup of fresh minced rosemary leaves and pour over the ribs or chicken parts that have been placed meat side down in a casserole. Bake for 40 minutes at 325 degrees.

A simple glaze for ham using rum can transform the meat. Simply combine a few tablespoons of brown sugar with a dollop each of Dijon mustard and peach preserves and a dash of your favourite rum in a small saucepan and cook over medium heat for a few minutes. Pour it over the pre-cooked ham and bake until it is warmed through and the glaze has caramelised. Delicious!

On the sweet side, rum pairs easily with chocolate, perks up cooked bananas and creates a taste sensation when heated with sugar and such tantalising spices as cinnamon, cardamom, ginger and nutmeg and drizzled over crepes, cakes, bread pudding and ice cream.

Rum’s big flavour and low cost made it a natural for the development of classic desserts in the Caribbean and Bermuda. The original rum cake recipe was heavy and very similar to that used to create English Christmas or plum pudding. It was adapted to suit the ingredients that were locally available, and baking eventually replaced the standard method of steaming. Because of its delicious blend of flavours, rum cake took on a starring role and became the centrepiece of Christmas and special occasions throughout the year. It became a must for weddings and christenings. For many demanding aficionados, though, it was too delicious to reserve for just those times, and it earned its place as a year-round dessert. Raisins and currants soaked in rum for 24 hours have also been added to all manner of dessert recipes since the time that the English specialty arrived on this side of the Atlantic.

Like rum, chocolate is a product of the Caribbean, and a premium single-source chocolate bar made with a high percentage of the rare criollo or trinitario bean can make for a simple yet excellent dessert when paired with a fine, aged rum.

Chocolate lovers with a taste for high-end rums (which mimic superior brandies) will find great satisfaction in blending the two. Trendy pairings of such rums and boutique-style chocolate bars have become legendary for some foodies. The two are a magical mix – and the combination is one of the Caribbean’s greatest gifts to the culinary world. You may even discover the ideal blend to fashion some holiday rum balls at a later date.

Alcoholic beverages have been part of Bermudian life from the earliest days, and sometimes it seems they became too great a part of life. Historical references from men of the cloth cite drinking as more popular than going to church on Sundays!

Rum drinks were concocted ages before rum became a dessert ingredient. Rum was one of the drinks of choice in the American colonies throughout the sixteenth century. And when British eggnog – with its base of milk, eggs, sugar – crossed the Atlantic to the colonies, rum was added as a cost-effective substitute for imported European brandy.

The simplest recipe – cooked bananas with brown sugar and rum – has long been prepared in Caribbean and Central and South American kitchens. In Bermuda, bananas have been enjoyed in this style, either baked in the oven or cooked on the stovetop, for myriad generations.

Rum from Barbados and Jamaica began making its way to our shores in the late 1600s when Bermuda’s enterprising captains made regular voyages south to trade with Caribbean plantation owners and tradesmen. Detailed records of imports from Bermuda into colonial Caribbean ports include livestock and preserved salted meats, fresh produce, honey and beeswax, salt, fine cedar furniture and fashionable palmetto hats.

In the 1700s, the Dutch and Danish Caribbean free ports became a mainstay for Bermudian traders since rum was sold at lower prices in these ports and the merchants – financial success increased handsomely as a result. And because Bermudian sloops were faster than most ships, they were much sought after by rum producers to deliver rum and sugar to far-flung destinations.

Bermudian captains – trading routes expanded to Charleston, South Carolina, and other ports along the colonial North American coast when passengers needed to travel to and from the Caribbean islands and the mainland. Along with their paid passages, the ships increased trade in all areas. Rum, sugar and other desirable commodities became the main reason for such forays, with handsome profits being the result.

Smuggling rum and other goods into Bermuda became a seriously lucrative business for locals in the seventeenth and eighteenth centuries. Apparently it proved to be impossible to restrain or control the importers. Policing was futile. Large kickbacks were the reward for authorities that turned a blind eye to such shipments. Indeed the conspiracy of silence was the key to success. Local captains regularly off-loaded the bulk of their cargo in the West End before heading to the formal entry port of St. George’s.

Bermuda’s illicit trade was so successful – the late 1700s being a particularly notable period with more than twice the recorded amount of cargo landing than was actually declared – that captains built big houses along the waterside with storage underneath. Many of these homes rivaled those in bustling British colonial North American port cities.

Take a look around the island; some of these magnificent homes are still standing. The recipe for the success of the men who built them and those dishes we enjoy as a result of the arrival of rum remain. 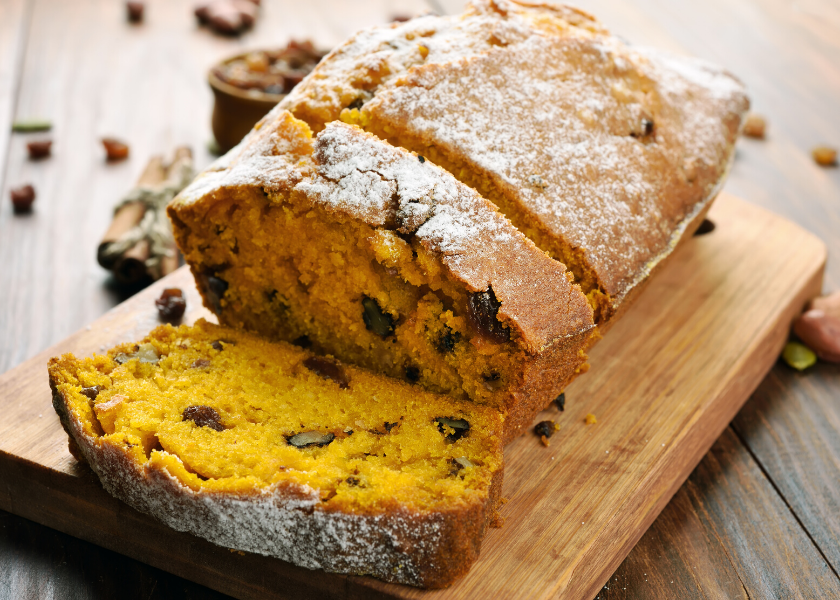 Preheat oven to 325 degrees F. Lightly oil or butter 12-inch tube pan and sprinkle walnuts evenly over bottom of pan. Combine all dry ingredients in large bowl. In another large bowl, add butter and sugars and beat with electric mixer until light and fluffy. Fold in eggs followed by pumpkin and vanilla. Mix until batter is smooth. Pour batter evenly into tube pan, tapping pan on counter to release any air bubbles. Bake 60 to 70 minutes, until toothpick comes out clean. Let cool on rack for about 15 minutes. Meanwhile, add glaze ingredients to small saucepan. Bring to a gentle boil and cook for about a minute. Remove from heat. Gently poke holes into the top of cake and pour the glaze evenly over it. Let cake cool completely before serving from the pan. 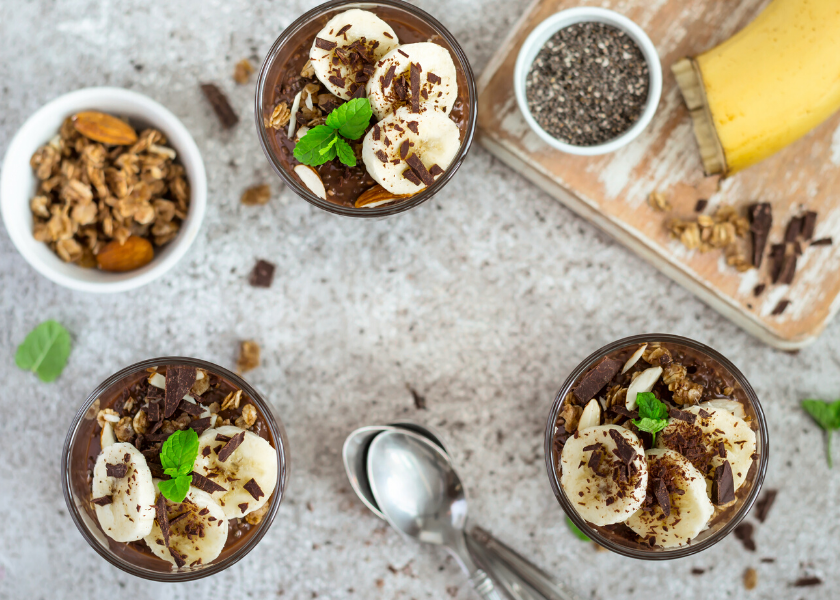 Using a double boiler – with about an inch of water in the bottom pot – melt chocolate in top pot, using a whisk to help the process. Mix in almond extract, nutmeg and rum. Do not let chocolate mixture bubble. Remove from heat, but keep covered. In separate stainless steel bowl,  beat egg yolks until thick and a light lemon colour. Slowly and evenly, whisk in about a quarter of chocolate mixture into egg yolks. Then very gradually add remaining chocolate – so that the eggs do not curdle. In a separate stainless steel bowl, beat egg whites into stiff peaks and fold evenly into the chocolate mixture. Spoon into cordial glasses. Chill. Just before serving, top with whipped cream and chocolate curls. 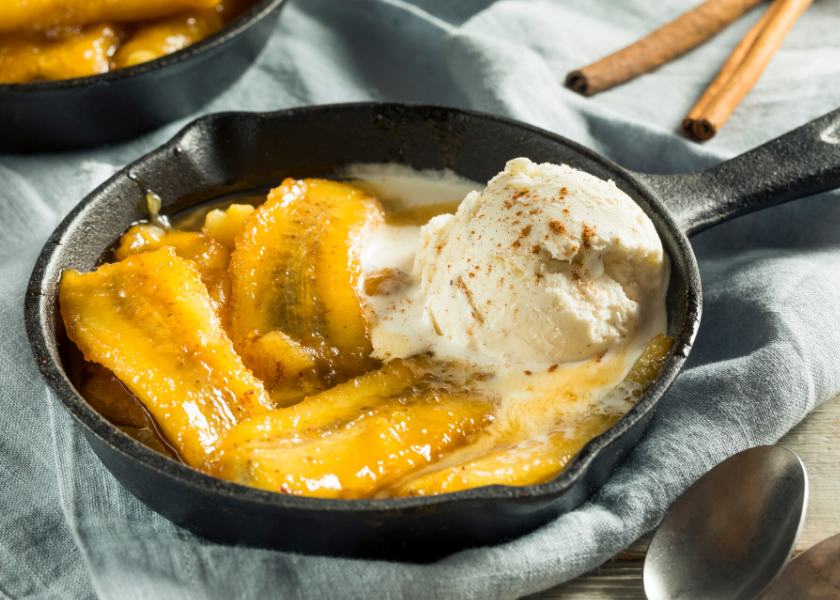 Bananas with Rum, Brown Sugar and Ice Cream
This classic Bermudian dessert is cooked on the stove top.

In medium saute pan over medium heat, melt the butter and sugar and whisk until dissolved. Add bananas, cut side down, for about one minute before turning very carefully. Remove pan from heat and pour in the premeasured rum. Return to heat and shake pan to allow rum to ignite. Let alcohol burn off before shaking pan to coat the bananas. Cook another minute until glazed and translucent. Gently place onto dessert plates and top with ice cream before serving.