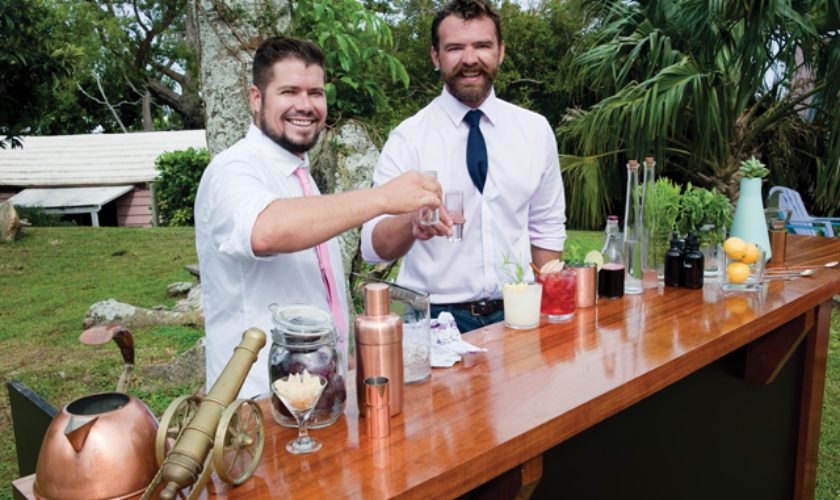 Shaken, Stirred or Straight Up?

Inside the apartment they share in Pembroke, mixologists Stefan Gitschner and Somers Carr carefully eye their racks of liquor, bitters, syrups and herbs, discussing among themselves what ingredients they could use to make two cocktails tailored to my own specific taste in booze.
After peppering me with questions about my palette, Gitschner settles on an old fashioned, while Carr cooks up a Tom Collins — two drinks I’ve always enjoyed, but also have a few gripes with. “They’re too sweet these days,” I tell them, which starts a lengthy conversation about the wider problem of sweeting-up cocktails in order to make them more accessible.
What resulted were two drinks worlds away from anything I had ever tasted before, and yet were somehow familiar, like a long-lost friend you never had.
This is what the men of Twisted Spoon do best. Whereas before, bartenders at an event came stocked with the usual suspects — a dark ’n stormy, black and coke, swizzle, and the other Bermudian staples — Twisted Spoon is arriving with a plethora of homemade, local ingredients, tailored exactly to the client’s wishes.
“For us, using fresh ingredients is so important,” says Gitschner. “When you’re making a really nice cocktail with fresh ingredients, it’s so much better. We make our own syrups, bitters, all of it.”
The idea for the business was borne out of selfishness, they both admit.
“We were sick of parties and getting served vodka sodas and swizzle, etc.,” says Carr. “We were talking about it one day and it just made sense. We’re both bartenders, we both have a lot of experience and are well trained. We wanted to give something locals have never experienced before.”
While their speciality might be coming up with bespoke cocktails, they don’t shy away from the usual suspects.
“Of course we do make those classic drinks, but we put our own twist on them,” says Carr. “For example with the swizzle, as opposed to putting in pineapple juice, we took a blow torch and charred pineapple wedges, soaked them in rum, then dropped them in the drink.”
Despite being in business only a few months, the two thirty-year-olds have already found themselves mixing cocktails for the likes of Maxi Priest and Shaggy, the reggae artists who performed this October during the America’s Cup World Series, an event that has been huge for their business.
“Between the Argo Gold Cup and the America’s Cup, I think we did 17 events in two weeks. There were a few times we did an event in the day and an event later that night,” said Carr.
For Gitschner, though, it seems the satisfaction of creating a cocktail people have never tasted before brings more joy than money can buy.
“The night of the concert we made three different cocktails named after their [Maxi Priest and Shaggy’s] songs. We had ‘Boombastic,’ ‘That Girl’ and ‘Sensei Garden.’ So I made Maxi Priest a Sensei Garden, and he takes a sip, and he just put his head down for a second [to savour it]. He loved it.”
“That’s what it’s all about.”
To book Twisted Spoon for your latest event, or even for lessons in how to make your very own cocktails with local ingredients, visit www.twistedspoon.rocks.

Festive recipes for the holiday season from Twisted Spoon

Who doesn’t like milk and cookies, especially when it has rum? This twist on a classic combination of milk and cookies will leave Santa saying HO! HO! HO! all through the night! Simply combine all liquid ingredients in a cobbler shaker, give a few good shakes and strain over ice in a rocks glass. (The cocktail should have nice thick foam.) Take your nutmeg and cinnamon and give a healthy rub on your micro-plane and garnish with the Pirouette cookie!

At Twisted Spoon, we are huge fans of whisky and even more so when in an old fashioned! That’s why we created Rudolph’s Old Fashioned, guaranteed to make anyone’s nose shine bright! This classic cocktail with a bit of a Bermudian twist will warm anyone who is feeling winter’s chill. Take your bitters and add a few drops in the glass, next add the syrup and give a little stir, then add the bourbon. Then take your orange rind and a lighter and squeeze the orange rind facing the flame to light the oils over the glass; this gives a smoky flavour to the cocktail. Drop the orange rind in the glass and add the ice sphere! Drink responsibly and Happy Holidays!

Twisted Spoon’s take on the classic French recipe, great for “cold” Bermuda evenings or Christmas parties. Cut the red apple into halves and remove the stem and the seeds and then press the cloves into the skin of the apple, five for each half. Then put all the ingredients (minus the cinnamon sticks) into a large cooking pot and place on a low/medium heat. (You never want the mixture to boil.) Once steam starts to rise from the pot but before it starts to boil, your batch is ready. Using tongs remove the apples from the pot and then strain your vin chaud into tall Irish coffee mugs and garnish with a thin slice of red apple and a cinnamon stick.

A Christmas variation on one of Carr’s favourite winter cocktails the White Russian made famous by Jeff Bridges’s character from Carr’s favourite movie The Big Lebowski. This cocktail would be great as a digestif or in place of dessert after a big hearty Christmas dinner. Add all ingredients (excluding the nutmeg) to a cobbler shaker and fill with ice. Hard shake for 5 seconds and then strain into a cocktail or coupe glass and then grate a small dusting of nutmeg on top. Enjoy!!