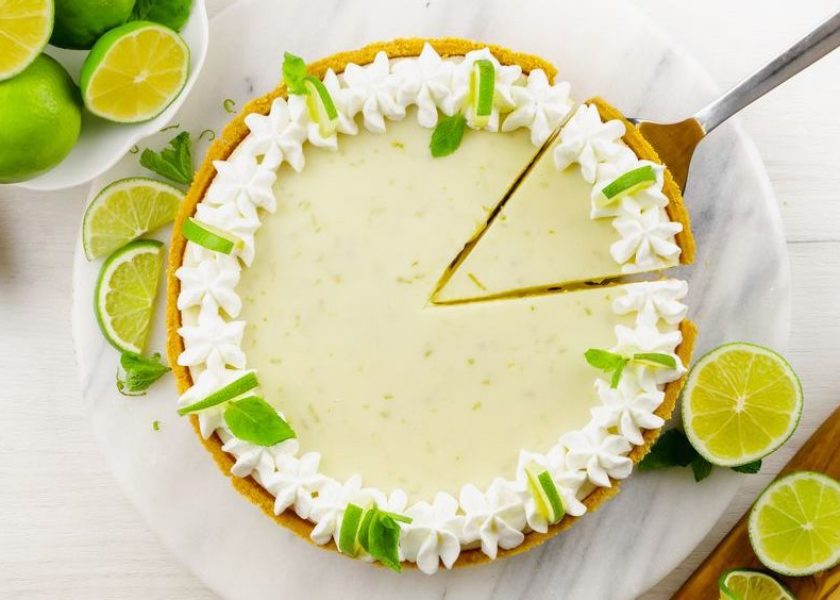 For the Crust
In a food processor pulse graham crackers until they become fine crumbs. Pour into a mixing bowl, whisk in sugar then pour in butter then using a fork stir until evenly moistened.
Pour mixture into a 9-inch pie plate (not deep dish) and then spread and press into an even layer along bottom and edges of pie (you don’t need to go the entire way up the edge, leave just 1/2-inch).
Bake in preheated oven until golden brown, about 14 minutes, And remove from oven then allow to cool completely (in the meanwhile prepare filling).
Reduce oven temperature to 325 degrees.

For the Filling
In a mixing bowl mix together egg yolks and lime zest, And stir in sweetened condensed milk, then mix in lime juice and sour cream till well blended.
Set mixture aside to rest for 20 minutes (this allows it time to thicken before pouring into the crust).
Pour into cooled crust and evenly spread, And bake in preheated oven until nearly set, 15 – 16 (pie could jiggle just slightly).
Remove from oven and allow to cool on a wire rack for 45 minutes, then chill in refrigerator 4 hours or up.
Pipe whipped topping over top, garnish with lime wedges if desired and then cut into slices. Store pie in refrigerator.

For the Whipped Topping:
In a mixing bowl using an electric hand mixer (or in the bowl of an electric stand mixer fitted with the whisk attachment), whip heavy cream till soft peaks form, And Add sugar and whip till stiff peaks form.