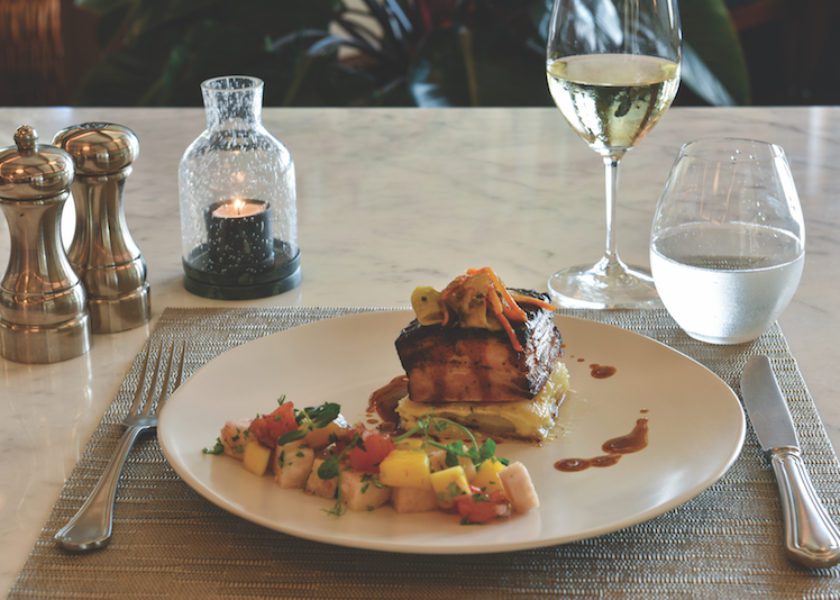 The Island Brasserie at Rosewood Bermuda

For followers of the tumultuous peregrinations of Bermuda’s hotels, the $25 million upgrade to Rosewood Tucker’s Point, now Rosewood Bermuda, will not have gone unnoticed. Unveiled this June, Rosewood has transformed the property overlooking Castle Harbour with seemingly no expense spared.

Quite luxurious, I must say, but it’s all a bit out of this lifestyle-magazine writer’s price range. All except Rosewood Bermuda’s new restaurant. You might have known its previous occupant, The Point—that opulent, special-night-out place your parents breezily spent half a grand at for their 30th anniversary.

While The Point represented quite the achievement in fine dining, perhaps, like Icarus, they achieved too much. It was too expensive. Too fancy. You couldn’t indulge yourself there without guilt, like a triple chocolate fudge cake. And so along with Rosewood’s other renovations, The Point underwent a makeover as well. Streamlined. Lightened. They drastically reduced prices—$38 is the most you’ll pay for a main course—toned down the opulence, loosened the dress code, and reinvented the menu.

The result is the Island Brasserie, and it’s now arguably the best restaurant in Bermuda, and this writer thinks you’d be hard pressed to find better food for price anywhere. Here lie the island’s gourmet cognoscenti, the same that designed the menu for The Point, just tasked with a different objective.

The Island Brasserie menu draws its inspiration from the mark left on Bermuda by the early trade routes that traversed the Atlantic, from the old world to the new. It is a contemporary, gourmet take on island food using exclusively fresh ingredients. The decor remains luxurious, and yet they’ve managed to tone down the setting enough to present an informal atmosphere both inside and outside on the terrace.

“When we decided to come up with the Island Brasserie concept, what we wanted to take was a whole journey of Bermuda’s food—where it’s come from—because everything here started from nothing,” Executive Chef Gerry Adams told me at the Tucker’s Bar before dinner.

“So I went back and read a lot of history on it, and obviously one of the first people here was Juan Bermudez. And on his second trip past here, he dropped off loads of pigs so that if any sailors got stranded, there’d be something there for them to eat.”

And that’s where they started. The first dish on the menu, and the first one should order, was Bermuda hog—a perfect square handful of glazed pork belly served on a pawpaw and potato gratin, with a side of mango jicama salsa and fermented bok choy.

“I’ve been here for 24 years,” said the Scot. “About 18 years ago I saw someone cooking savory with pawpaw. That’s where I got the idea for the green pawpaw gratin potato. The reason I’ve done that is because I thought, ‘Well back then, what would be on the island? What would they be eating? It would be quite a tropical plate.’ So that’s where we started and we just kept developing it.”

It’s the inventiveness, their single-minded devotion to concept that makes Island Brasserie work so well, but it wouldn’t be possible without the ingredients, which Adams insists on being fresh every day.

“Everything that’s available on the island we use it, whether it’s Tucker’s Farm Goats Cheese, BermyFresh, Wadson’s Farm, J&J’s farms, everybody. Everything they’ve got, we’ll use it where we can. With James’s goat’s cheese we just came up with a goat’s cheese fudge two weeks ago,” he said with a smile.

Along with the pork belly (pictured above) you’ll want the waiter to bring you and your company a few key items. Number one is the Island Brasserie’s take on codfish breakfast, the Bermuda Benedict. It’s an appetizer about the size of your fist, and honestly, take heed. codfish breakfast won’t ever be the same again! 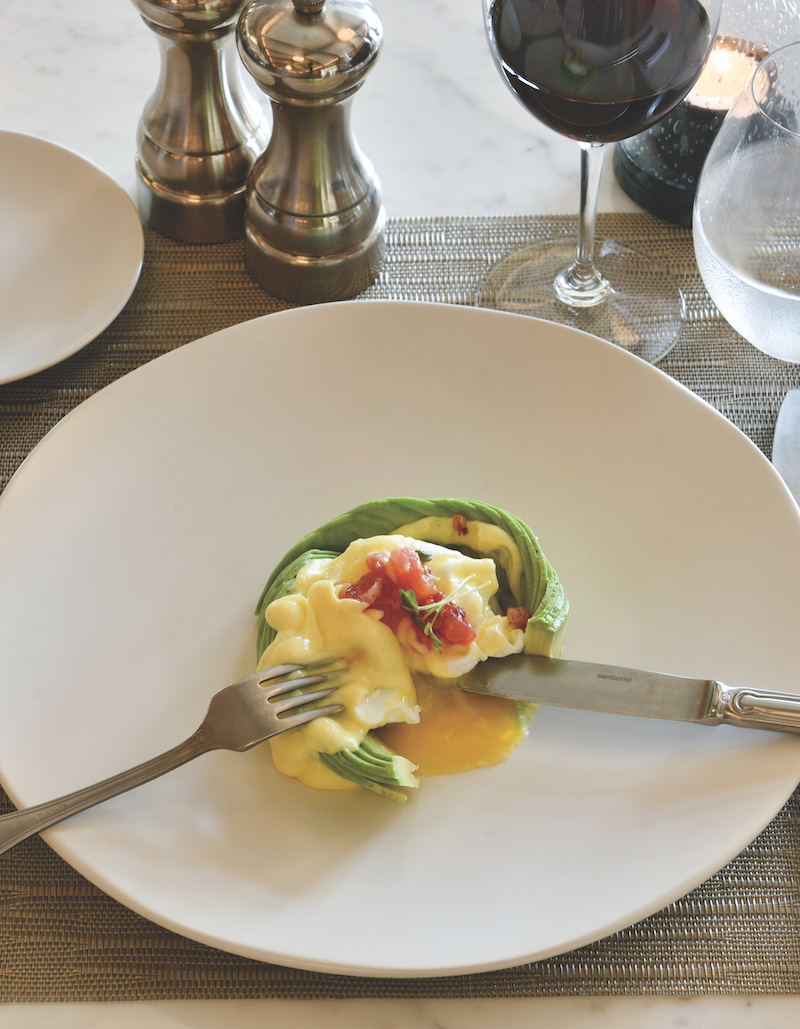 “We take all the elements of a codfish breakfast, make a little codfish cake, top it with banana, then a poached egg, then some hollandaise sauce and spicy tomato, then we surround it with avocado,” said Adams. “This is a Bermuda breakfast served and presented elegantly.

“A lot of the items are about that, our inventiveness with the ingredients. We have a team of great chefs that were cooking fine dining food up until last year. Their approach to it… they still have the same sort of methodology that they had with The Point, but they’re using completely different ingredients. They’re still using these forward-thinking styles of cooking and presentation, but they’ve just changed the flavour.

It’s not just about gourmet takes on Bermudian classics though. There’s an array of comfort food on offer as well. The Gombey Burger is the best hamburger I’ve tasted since Dorothy’s shuttered. The flame-grilled jerk chicken wings were my favorite item of all—yes I love wings that much. You don’t even need teeth to eat them. And then there’s the electric mac and cheese… don’t tell your mom when you realise it’s better.

At the end of our evening, my date and I found ourselves laughing out loud at the whole experience. It was surreal. But unlike a dinner at The Point, we’re going right back in a couple weeks. I’ve gotta try that goat’s cheese fudge.

Before your dinner, stop by Island Brasserie’s adjacent watering hole, the Tucker’s Bar. Rosewood Bermuda’s bar manager, John Lake, has concocted a selection of cocktails that are just as worthy of sampling as the food.

“Every bar at Rosewood Bermuda has a spirit it champions, which helps to reinforce the identity of the bar. So Tucker’s Bar is directly linked to Island Brasserie, which celebrates everything Caribbean, and seeing as we’re in Bermuda we figured that Tucker’s Bar is the ideal place to show off rum in all its different forms, and especially in cocktails. We have some rums here which you can’t find anywhere else on the property, which gives it an exclusive feel, but we also have some rums you can’t find in many places in the world. For instance the Samaroli range, which is a really cool blend of rums which are all aged in Scotland. We do rum tastings as well, so anyone can come along and sample them. We also have Bermuda rums, and rums from all over the Caribbean and Central America.

“The cocktails are also rum-heavy. We’ve got things like the Sir Daniel Tucker, which is my version of a rum Manhattan using the Gosling’s Family Reserve. Most people wouldn’t use it in a cocktail normally, as it’s viewed as a sipping rum, but I think we treat it with enough respect and delicacy that it still holds its own.

“We also have the Shipwrecked, which is my take on a Dark ‘n Stormy, using Gosling’s Black Seal, fresh ginger, a little bit of apple juice for sweetness, some Angostura bitters, lime juice, and honey syrup, shaken up and served in a martini glass. So it’s still all the flavours of a Dark ‘n Stormy, but served in a more elegant, refined fashion.

“One of the cocktails that has really done well this year is the Tiki Old Fashioned, which uses Plantation Old Fashioned Traditional Dark rum, which is an overproof rum, our house bitters—a blend of orange bitters, Angostura, old fashioned bitters—and a little bit of honey syrup just to sweeten it up. And that’s been a big seller for us. It shows off rum in a really cool way that some people might not have seen before.