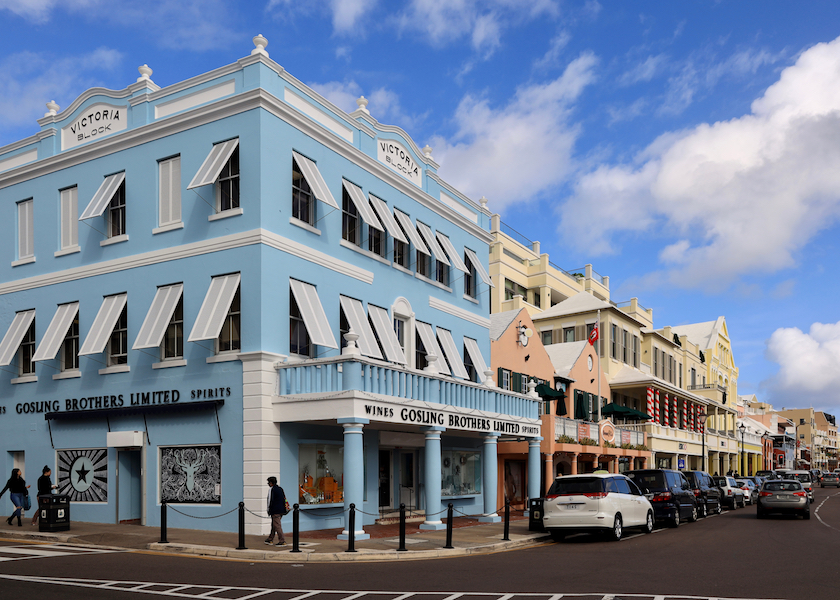 33 Front Street is Under Renovation and We Can’t Wait to See the New Gosling’s Store!

You may have noticed that the iconic Gosling Brothers flagship store on Front Street is in the process of receiving a much-needed facelift.

Having occupied its place on the corner of Queen and Front Street since 1824, the renovations, which began this January, have been a long time coming, President and CEO Nancy Gosling told The Bermudian.

But worry not, the historic building won’t be changing much on the outside—the classic sky blue facade is too important to ever replace.

Mrs Gosling sat down with The Bermudian to answer a few questions about what we can expect to find inside the new 33 Front Street building. Although she isn’t giving everything away just yet—any talk of exciting new features will be kept under wraps until they are revealed at the Grand Re-Opening.

What was the impetus for renovating Gosling’s flagship store now?

NG: We have wanted to renovate the store for some time now, but for one reason or another it was always delayed. Global warming and rising sea levels and tides have caused sea water to occasionally seep into the basement of the building, and we can only see this problem becoming worse as time goes on. We found a solution by building new interior walls in the basement and leaving a gap between them and the original walls, where water can be pumped out if it rises high enough, so that it doesn’t infiltrate the interior of the basement.

Are there any parts of the building that are original to 1824?  If so, will they remain that way after the renovation?

NG: A lot of the exterior of the building is the same as it was in 1824. The wooden floors in the building are still the original floors, and all the masonry is original. We have changed things here and there over the years—the windows, blinds and doors, and during the last renovation in 1985, we changed the pillars on Front Street below the balcony to the larger white pillars you now see. That was when we painted it blue and white and installed the push-out shutters. We actually won a National Trust award for that renovation!

When the store reopens what can we expect to be the most exciting and noticeable change?

NG: The most exciting and noticeable change will be the shelving, lighting and flooring… basically the whole, general layout of the store. Before, we had only one bottle of a particular wine on the shelves, and a customer would have to ask the sales person for it, who would then have to go down to the basement and find the relevant bin for the wine, then bring it back up to the customer—which was obviously a very time consuming and labour intensive process. Our new shelving will contain multiple bottles of each wine, so a customer will simply have to select the bottle and bring it to the cashier desk. The renovated store will also feature a special sales kiosk for duty free packages only.

Will there be a grand reopening? If so, when and is the public invited?

NG: The public will be advised of the opening date of the store. Our liquor license prohibits us from doing anything other than selling unopened bottles of wines, spirits and beers in the shop. There will definitely be a re-opening.

There is currently a Gosling’s pop-up shop open at 95 Front Street. How long will that remain open?

NG: It is planned that the pop-up shop will remain open until the renovated Front and Queen Street store is open.