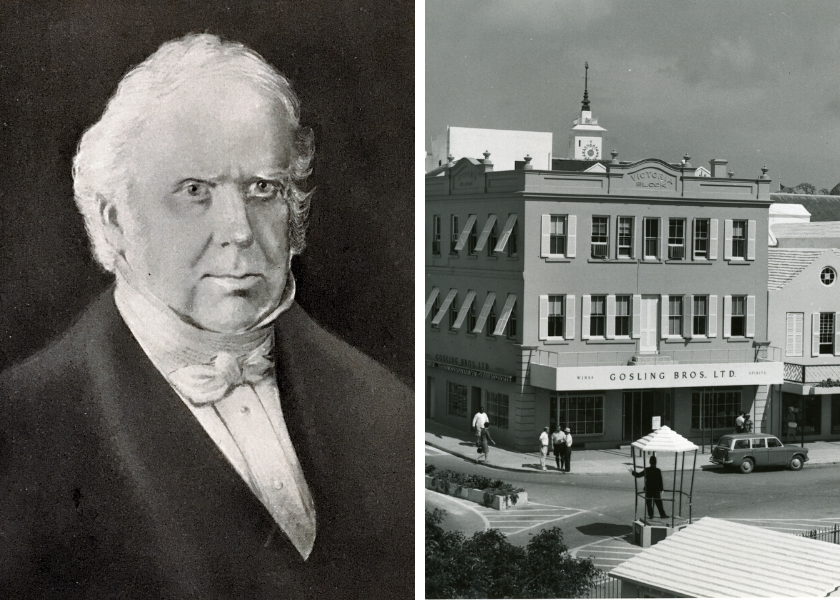 Bermuda’s Oldest Business House: A History of the Venture that Became Gosling Brothers

This article was taken from our archives. It originally appeared within the March 1933 issue of The Bermudian. It appears here exactly as it did originally.

During the month of July, 1806, there arrived in the port of St. George’s in these islands a sailing ship, the Mercury, from London. She was laden with a cargo of wines and spirits valued at more then ten thousand pounds. This shipment was a venture by William Gosling, a “wine merchant of good repute” of Knightsbridge and Bucklersbury in the City of London, and the owner of Clay Hall, Hertfordshire.

In charge of this cargo was his eldest on James, and assisting him was John Till, a trusted clerk of the London firm. Till was on his way to Prince Edward Island to take possession of an estate belonging to William Gosling. Soon after the arrival of the Mercury at St. George’s it became obvious to all concerned that so large a shipment of liquor could not be readily disposed of in Bermuda. There was no firm of wine merchants trading in Bermuda at that time, and such small ship chandlers and “rum shops” as were in operation had neither the money to purchase such a valuable consignment nor the knowledge necessary for running a wine merchant’s business.

It was decided, with the approval of the owner in London, to start a wine merchant’s business at St. George’s. A partnership was arranged between William Gosling, his two sons, James and Ambrose, and John Till, the firm operating under the name of Gosling and Till.

This venture marked the inauguration of the wine and spirit trade in Bermuda. Prior to 1806 certain small stores had imported occasional consignments of rum and brandy which they marketed as a side line of general merchandise, and there were probably several small taverns in existence, but the commencement of the wine trade proper in these islands is definitely associated with the name of Gosling.

Arrangements for the new business having been completed James Gosling returned to London, leaving Till in charge. The younger son, Ambrose Gosling, also appears to have remained in Bermuda to carry on the work, as his name is found in a petition to the House of Assembly in the year 1808. The firms in London and Bermuda carried on until the death of William Gosling in 1811, when, owing to the settlement of large legacies left in his will and to a prolonged suit in Chancery (Campbell v. Gosling, which lasted until 1828), the London firm failed and with it fell the growing business in Bermuda.

Nothing more is heard of the Goslings in Bermuda until 1814, when Ambrose Gosling, the younger son, after revolving in his mind the business opportunities offered in Bermuda, decided to come out here and start afresh. Soon after his arrival he became a partner of James Till, the brother of his father’s old clerk, in a general merchant’s business in St. George’s which was carried on under the name of Till and Gosling. This arrangement lasted only eight years, and in 1822 the partnership was dissolved. James Till remained in St. George’s and Ambrose Gosling started out in business by himself in Hamilton. This dates the foundation of the present firm of Gosling Brothers.

Among the interesting relics of this period now in the possession of the firm are the badge of the Brewers’ Company of the City of London, to which its founder belonged, and a rent agreement between Ambrose Gosling & Stowe Wood, Esq., dated 16th July, 1823, for a shop in Front Street, Hamilton, which is still a part of the firm’s business premises. 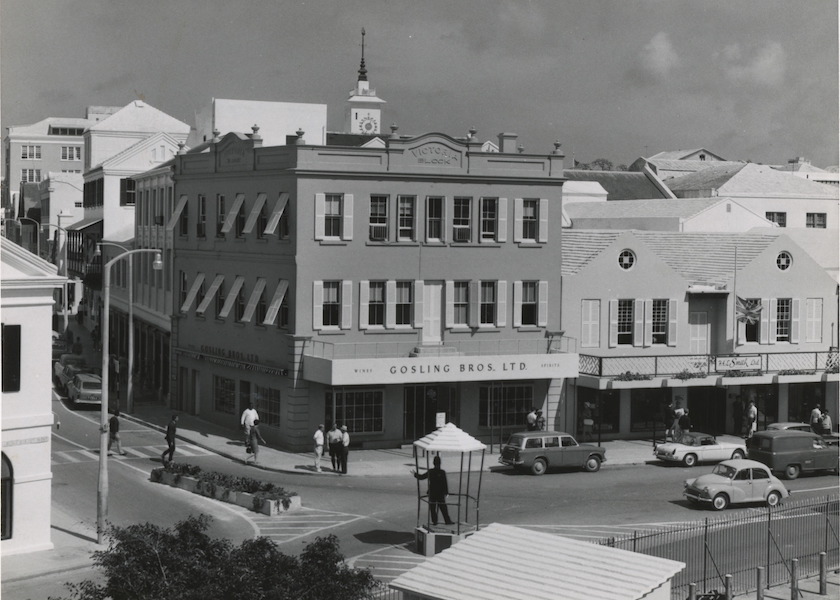 Ambrose Gosling seems to have made but little progress at this early period, for, as he mentions in his correspondence, for as he mentions in his correspondence, he had thoughts of going to America or returning to England. Things must have improved however by 1834, as during that year he took his eldest son, William H. Gosling, away from school to help him in running what he describes as “my growing business.”

The name of the business was then changed to Ambrose Gosling and Son. It is interesting to note that the same shipping mark, A. G. & S., is still used on nearly all importations by the present firm.

Two papers are still preserved by the firm which refer to this period. One is a license to “utter and sell spirituous liquors,” dated 22nd April, 1843, in which the license-holder is bidden “not to suffer any rioting, gambling, dancing, fiddling, or other music in the licensed shop except such dancing and music as is of a domestic nature.” The other is a fire insurance policy, the earliest that can be traced and probably the first taken out on the firm’s account; it is dated 19th August, 1846, and is with the Phoenix Assurance Company of London, England.

It was during the period covered by these documents that the father and elder brother were joined by the younger brothers, Edmund H. and Charles G. Gosling. The business was thus carried on until 1857, when the father, Ambrose Gosling, died. On the first of July of that year the brothers changed the firm’s name to its present one, Gosling Brothers.

Good fortune was soon to come to the new firm. During the Civil War period in America the brothers were able to open a branch of business in the town of St. George’s, the site of their father’s early efforts. Business was brisk in those days, as these islands were used as a port of call for the blockade runners to the Confederate States. The premises at which the St. George’s branch was opened were in Water Street, not far from the firm’s present location in Market Square.

The business was carried on so amicably by the brothers that it was not until 1883, when they were all getting on in years, that they thought it necessary to define their several shares by the drawing up of some partnership articles. Shortly after this, in 1885, Edmund H. Gosling died, and in 1888 Charles G. Gosling retired, leaving their elder brother in control; he, however, took their sons, Edmund W. and Ambrose Gosling, respectively, into partnership with him in 1890. It was during the period of this partnership that a grocery business was added.

As a sidelight on the character of Mr. William Gosling, and the esteem in which he was held, the following letter from His Excellency Lieutenant-General Sir R. M. Laffan, a former Governor of Bermuda, is of interest:

It gives me great pleasure to assure you that during my stay inn Bermuda I have derived the greatest satisfaction — and I may say personal comfort — from all the relations I have been so fortunate as to establish with yourself and your admirably conducted House — as my Bankers, and as Wine Merchants, and as General Commercial Agents and Purveyors. I sincerely hope that throughout the New Year 1880 your House will continue to enjoy its old and well merited success, and that you will long be spared to guide its operations with that prudent foresight and ripened wisdom which has made you not only a most successful merchant but also a valued Political advisor. I wish you and your brothers every possibly success.

Believe me, Ever sincerely yours,

In 1894 William H. Gosling died, after sixty years in the firm, and his nephews took over control. The arrival in Bermuda of Boer prisoners-of-war in 1900 meant an increase of prosperity throughout the island, from which the new owners benefited. After the return of the prisoners to South Africa the growing influx of visitors from the United States of America kept business moving forward. During this period the extension of H. M. Dockyard at Ireland Island warranted the opening of a branch in Somerset.

During the years of the Great War business in Bermuda was naturally at a standstill but things began to pick up again in 1923 and 1924. In 1927 Edmund W. Gosling retired from an active part in the management and in 1928 Ambrose Gosling died, leaving their sons to carry on a business which had been in the family for more than a hundred years.

Due to the careful administration of past generations the firm had by this time outgrown the stage of partnership management, and in 1929 it was found expedient to turn it into an incorporated company, thus again slightly altering its title to Gosling Brothers, Limited.

In the seventies and eighties of last century, and even earlier, before there were any chartered bans in Bermuda, Gosling Brothers did most of the banking business for the Garrison and Crown officers stationed here, and among their highly prized possessions are many letters from former governors and officers of the Garrison expressing in terms of glowing praise and sincere friendship their appreciation of their connections with the firm.

Besides the distinguished soldiers who have served in Bermuda as Governor and Commander-in-Chief, Gosling Brothers have had the honour several times during their history of supplying members of the British royal family, notably the Lady Patricia Ramsay, and still more recently, H. R. H. the Prince of Wales.

When His Royal Highness visited Bermuda in 1931 Gosling Brothers asked his acceptance of a case of wines and spirits made up from remnants of very old importations of wines of a somewhat historical interest. Among the documents frame in the company’s office is the Prince’s acknowledgement and thanks for the gift.

This ancient firm has always endeavored to keep abreast of the times, and to take a prominent part in the life of the community to which it belongs. When, in connection with the 1930 Floral Pageant, a cup was offered to the best decorated store in Hamilton Gosling Brothers won the trophy (at least in theory — since up to date the cup has not materialised!)

In 1924 a new branch of Gosling Brothers was opened on Reid Street, and in 1929 the Front Street store was remodelled and modernised, particularly with regard to the grocery department, which is now one of the most up-to-date of its kind in Bermuda.

The grocery department has required considerable enlargement owing to its increasing popularity and reputation for first-class service, and in 1932 it was found necessary to enlarge the packing room and once again remodel the store. At the same time a new device was installed for keeping fresh vegetables in perfect condition, and as this necessitates a continuous fine spray of fresh water over the vegetables it was made possibly only by the waterworks recently inaugurated by Sir Harry Watlington.

Gosling Brothers was the first grocery firm to install such a plant, as they were also the first firm to install a private refrigerating plant and chill room, and to supply fresh vegetables in a large variety to their customers in the summer months, thus solving a perennial problem for many grateful Bermuda housewives.

In still another field Gosling Brothers has stepped to the fore. Their horses have always been renowned for their excellent condition. The Goslings have shown their invariable love of animals in the care of their stable. In 1932 new and up-to-date stables were built, which are certainly as fine as anything of the kind in Bermuda.