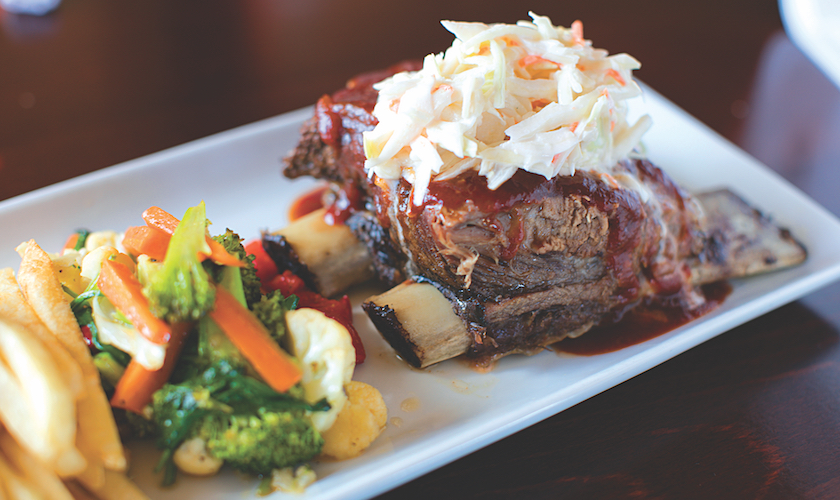 As the home of Bermuda’s national drink, the Rum Swizzle, the Swizzle Inn restaurant and bar has always been a staple for Bermudians seeking out some pub grub and a relaxed, fun atmosphere.

But with the restaurant’s location in the East End of the island, getting there required some effort. That all changed in 2006 with the opening of the South Shore Swizzle Inn, located in Warwick and in close proximity to Bermuda’s most popular beaches. The new location has proven a hit for both visitors and locals seeking a refreshing piña colada or basket of buffalo wings after a morning spent in the sun and surf.

The menu is a blend of pub favourites and local classics, ranging from a towering plate of nachos to their signature fish sandwiches and chowder. Almost everything is made in-house, with nightly specials featuring freshly caught fish and other dishes. The fare is a reflection of both visitors’ and locals’ tastes, featuring items like conch fritters, quesadillas, grilled rockfish, and slowly braised beer ribs.

With a large outside patio, bar, and dining room, there’s room for more than a hundred guests at the South Shore Swizzle and little need for a reservation. Just rock up with your crew, take a seat, and one of the long-serving, friendly staff will be with you in no time. And with the restaurant being so close to the beaches, there’s no need to worry about a dress code. The staff are just as laid back as the customers and will ply you with pitchers of rum swizzle if there’s even a whiff of stress in the air.

The Swizzle Inn is also a great, laid-back date spot, especially during the summer months, when live entertainment is offered on the patio. If you’re just out for some drinks, there’s a huge variety of frozen cocktails on offer, along with the standard collection of bottled beers and three beers on tap.

Ultimately, if you’re looking for a laid back, affordable lunch that may or may not go deep into the afternoon, fueled by multiple rounds of drinks, you really needn’t look much further. You’ll meet plenty of characters while you’re at it – locals and tourists alike. There’s a reason the Swizzle Inn is Bermuda’s most famous restaurant. Even the gift shop is popular. Purchase one of their famous, “Swizzle Inn, Swagger Out” t-shirts and you’re very likely to run into someone, somewhere in the world, who knows exactly what it means.