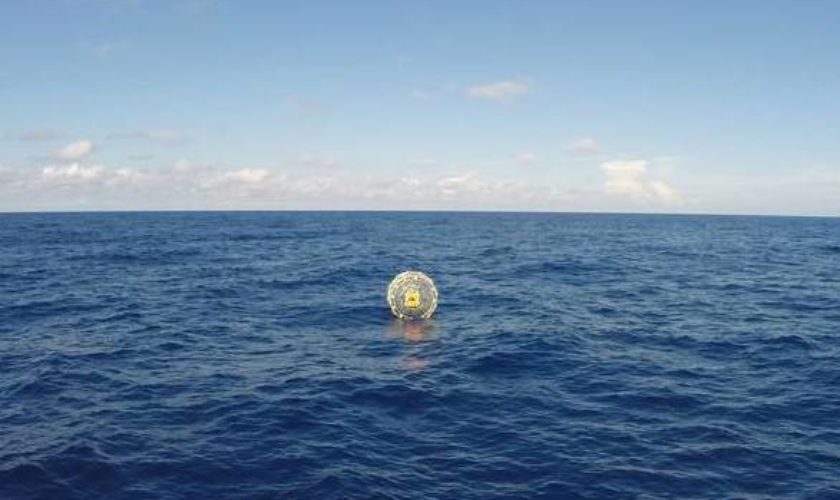 On the one hand, it might be the most high camp ‘bubble’ scenario since the first season of Seinfeld when George Costanza is asked: “What are you looking at? Never seen a kid in a bubble before?”

On the other… You can’t run from Florida to Bermuda in a bubble. Or can you? Clearly a man willing to risk the ignominy of being rescued in a Zorb by the US Coast Guard, as “bubble boy” Reza Baluchi was last Saturday, thought otherwise. Baluchi, an endurance runner and “peace activist” sponsored by Unicef and — perhaps more fittingly — the Denny’s restaurant chain, was plucked from the ocean last weekend after attempting to run 1,033 miles around the Bermuda Triangle in an inflatable ‘Hydo-Pod’, as his website called it. While the stunt was evidently part of the Iranian exile’s mission to promote world peace through jogging, word on the Coconut Wireless maintains Baluchi was merely trying to “make de drop.”

And yet, as Elbert Hubbard wrote in More Random Walks in Science: “A man who says a thing cannot be done is quite apt to be interrupted by some idiot doing it.” But when that thing is traversing the Bermuda Triangle in a bubble with nothing but protein bars and water, and when the people telling you to cut it out are members of the USCG, old Mr Hubbard’s insight no longer applies. To Baluchi’s credit, he refused any assistance the first time they approached him and actually had the comedic wherewithal to ask for directions. But alas, the reality of the situation eventually dawned on him. Baluchi activated his emergency distress beacon and the USCG returned, unamused, to yank him from the maw of Natural Selection, much to Darwin’s dismay. Instead of a two-page spread in the New York Post heralding Baluchi as the Bermuda Triangle’s latest victim, he is back on dry land, presumably sketching out a new plan to circumnavigate the globe using a kite.

Which leads us to the following conclusion… When you can ring up the Coast Guard from an inflatable orb in the middle of the Atlantic, I think it’s safe to say that getting lost in the Bermuda Triangle just ain’t what it used to be. Technology has all but stripped the legend of its menacing aura, and the middle class post-gentrification crowd is just itching to set up shop. It’s the Manhattan of the mid-Atlantic. But instead of putting the legend to rest once and for all, it seems the myth has come to occupy new territory in the global zeitgeist, a grey space between fact and fiction the world’s clinically deranged are clambering to test out. A video promoting the stunt on Baluchi’s website says it all, with a melodramatic voice-over to boot: “The Guinness Book of World Records lists it as the most dangerous place in the world… The Bermuda Triangle.” But really? It’s as if the statue of Johnny Barnes has become our own version of Lady Liberty, a New Colossus for our archipelago beckoning the world’s madmen to our shores: “Give me your wacky, your loons, your befuddled asses yearning to be free…”

Then again, this kind of high-minded idiocy is a publicist’s wet dream. Titter all you want, but this Onion thinks Reza Baluchi was onto something. Like many of history’s forgotten innovators all Bubble Boy was lacking is the right marketing, unlike his fellow madman Olek Doba, the sinewy and bearded 67-year-old Polish kayaker that made an unscheduled stop in Bermuda on his way to becoming the first person to kayak from Europe to America. And let’s not forget Sir Richard Branson’s failed attempt at breaking the transatlantic speed record in a sailboat. Could it be that reaching Bermuda via wild and wacky modes of transportation is just what our tourism industry needs? Here’s hoping The Authority is paying attention. “Bermuda: unreachable by Zorb, very reachable by air. Book your flight today.”