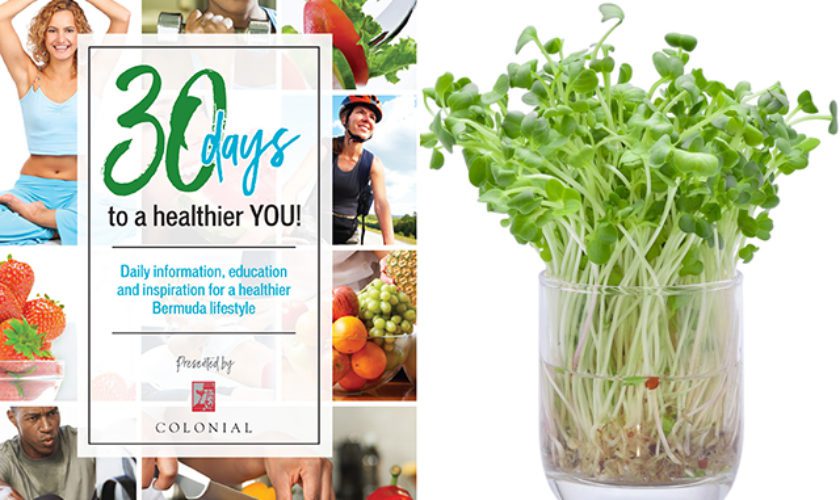 Indeed, they may be tiny, but a new study shows trendy microgreens punch well above their weight when it comes to nutrition. Researchers found microgreens like red cabbage, cilantro, and radish contain up to 40 times higher levels of vital nutrients than their mature counterparts.

Microgreens are young seedlings of edible vegetables and herbs harvested less than 14 days after germination. They are usually about 1-3 inches long and come in a rainbow of colors, which has made them popular in recent years as garnishes with chefs. Although nutritional claims about microgreens abound on the Internet, this study is the first scientific evaluation of their nutritional content. Researchers say they were astonished by the results.

“The microgreens were four- to 40-fold more concentrated with nutrients than their mature counterparts,” says researcher Qin Wang, PhD, assistant professor at the University of Maryland in College Park. “When we first got the results we had to rush to double and triple check them.” For example, red cabbage microgreens had 40 times more vitamin E and six times more vitamin C than mature red cabbage. Cilantro microgreens had three times more beta-carotene than mature cilantro.

Researchers evaluated levels of four groups of vital nutrients, including vitamin K, vitamin C, vitamin E, lutein, and beta-carotene, in 25 different commercially grown microgreens. The results are published in the Journal of Agricultural and Food Chemistry.

Cilantro microgreens were richest in terms of lutein and beta-carotene.

“All of these nutrients are extremely important for skin, eyes, and fighting cancer and have all sorts of benefits associated with them,” says researcher Gene Lester, PhD, of the USDA.

Lester said he was surprised to find microgreens were superior in nutritional value than the mature plants. “To find that the levels were not only detectible but in some cases 4-6 times more concentrated than in the leaves of a mature plant, I find that quite astonishing.”

Although more research is needed, Wang says there may be a good explanation for microgreens’ high nutrient content. “Because microgreens are harvested right after germination, all the nutrients they need to grow are there,” says Wang. “If they are harvested at the right time they are very concentrated with nutrients, and the flavor and texture is also good.”

A Little Goes a Long Way

Experts say the flavor of microgreens is also more intense, so a little goes a long way to enhance a meal. Until recently, commercially grown microgreens have only been available to chefs, who use them as flavor accents and garnishes for soups, salads, and sandwiches. Today, they are available at most farmers markets and upscale grocery stores. They generally cost more than mature greens, but registered dietitian Roberta Duyff says that shouldn’t discourage people from eating them. They are quick and easy to grow indoors on a sunny windowsill and are a great project for kids, says Duyff, who is the author of the American Dietetic Association Complete Food and Nutrition Guide.

“They are little, and kids like things that are kid’s size,” Duyff says. “They can put it on their own salad or some cheese or hummus to make it look pretty.”

Like most spices and herbs that are also highly concentrated with nutrients, she says you don’t need much to add flavor and spark to the plate. Duyff says microgreens are extremely delicate and, like any raw vegetable, need to be washed carefully before eating. Due to their high water content, cooking microgreens isn’t recommended.

When choosing a microgreen, researchers say to look for the most intensely colored ones, which will be the most nutritious. “It’s really kind of an artistic thing currently, but it’s nice to know that not only do microgreens look pretty and have strong flavor, but they also have an incredible punch of nutrition,” says Lester.

Microgreens are available locally at BermyFresh Farm Market, located at 15 Wellbottom, Southampton. Stop by on Fridays between 2:00 p.m. and 6:00 p.m. and on Saturdays between 9:00 a.m. and 3:00 p.m. In addition to microgreens, BermyFresh grow and sell their own baby salad greens and shiitake and oyster mushrooms, as well as carry a wide-range of locally grown and made food stuffs.

In a large bowl, combine water, yeast, honey and olive oil. Mix with a spoon, then let sit until foamy, about 10 minutes. Add in 2 1/2 cups flour and salt, stirring with a spoon until the dough comes together but is still sticky. Using your hands, form the dough into a ball and work in the additional 1/2 cup flour, kneading it on a floured surface for a few minutes. Rub the same bowl with olive oil then place the dough inside, turning to coat. Cover with a towel and place in a warm place to rise for about 1-1 1/2 hours.

After the dough has risen, punch it down and place it back on the floured surface. Using a rolling pin or your hands, form it into your desired shape (sometimes I use baking sheets and do rectangles or free form pizzas – this specific dough will yield one pizza large enough to feed about 3-4 people) and place on a baking sheet or pizza peel. Place the towel back over the dough and let sit in the warm place for 10 minutes.

Meanwhile, place the ricotta on a paper towel. Press the top of it with another paper towel to rel
ease some of the water.

Heat the oven to 425 degrees F. (If I use my pizza stone, I heat my oven to 475 degrees and bake for 15 minutes. If you’re just using a baking sheet, follow the directions below for baking and set to 425 degrees.)

Brush the pizza dough edges with 2 tablespoons of the olive oil. Sprinkle the garlic cloves on the dough. Spread the ricotta on the dough evenly – so just a bit covers the dough leaving a 1-inch outer rim. Place the peach slices on the pizza. Sprinkle with salt and pepper and drizzle with the remaining 2 tablespoons of olive oil. Cover with the fresh cilantro, basil and rosemary,  Carefully pull apart the burrata ball and place it in the center, pulling pieces out towards the edges.

Bake for 20 to 25 minutes (or around 15 to 20 minutes if using the pizza stone) until the cheese is golden and bubbly. Remove and top with the spicy microgreens. Slice and serve immediately.