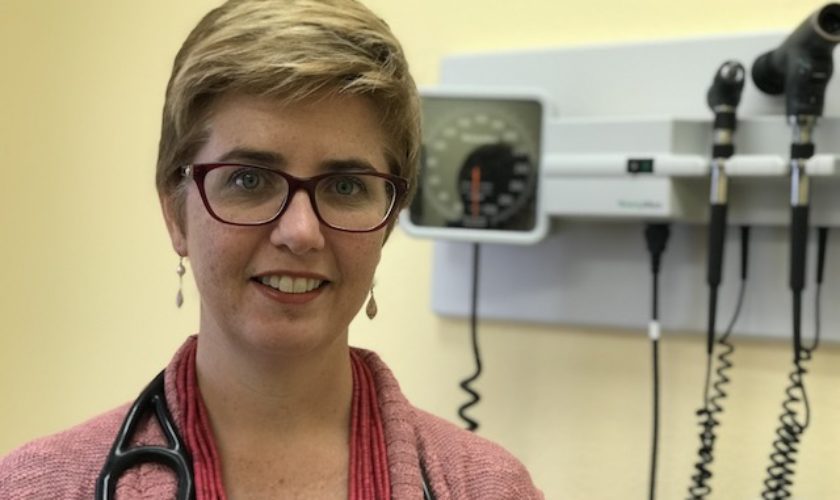 Since the inception of the Bermuda Program in 1976, more than 150 young Bermudians have taken part in the annual summer internship at BIOS, and many apply their experiences toward university studies in science, as well as science-based careers. In 1989, at age 17, Joanna Sherratt was one of those students when she spent a summer studying the chemical composition of seawater. The program helped her fine-tune her interest in science; she realized that ocean science research wasn’t her passion, and that realization helped clarify her thinking as she pursued her long-term goal of becoming a medical doctor. She studied at the University of Nottingham then spent six years as a medical officer in the Royal Air Force in England. In 2011 she returned to Bermuda with her husband, Martin Wyer, and their two children. She now practices family medicine with Somers Medical Services in downtown Hamilton.

When you were growing up, and attending school in Bermuda, was there a specific science field that captured your attention?

Sherratt-Wyer: I was always interested in science. In fact, I just liked learning. I had some wonderful science teachers at the Bermuda High School for Girls (as known as BHS).  My physics teacher, Mr. James, had a way of explaining things so that I just got it the first time, every time. And Mrs. Simmons (previously Gabisi) was inspiring; she could see how much I loved to learn, and told my mum I should aim for Oxford one day.

Did you have other interests, in addition to science?

Sherratt-Wyer: I was, and still am, heavily into music. So I was always carrying a huge bag of schoolbooks, plus a cello and a bag of music notes, to and from school. When I turned 16 and was riding a bike, my mum had to deliver my cello to school. Also at age 16, I went to the United Kingdom to do A-levels, and studied biology, chemistry, and mathematics while on a music scholarship, and then followed that up by doing my first degree in philosophy, politics, and economics at Oxford. It was not the obvious degree for a scientist, but I have always enjoyed a range of subjects.

Please describe your experience with the Bermuda Program.

Sherratt-Wyer: At age 17, I spent a summer working at BIOS.  I was between my first and second years of A-levels in the U.K., and had been asked to do a project to submit as part of our final assessment. We were expected to turn it in at the end of the summer.  I spent the summer doing the same experiment twice daily and compiling all my results, and then I wrote up the project before returning to school.  I proudly returned, only to find only one other student had done their project over the summer, and in the interim the school had changed the curriculum so that it was no longer a required part of the final assessments.  However, I do remember winning the school prize that year, and it was certainly a good lesson in the rigors of research.  When it came to doing a research project as part of my medical degree, I certainly had a head start in knowing what I was going to be expected to do.

Any memorable lessons learned from your time with the Bermuda Program?

Sherratt-Wyer: I remember coming away with a profound sense of respect for scientists, but similarly a realization that being a research scientist was not a field I was keen to pursue. I discovered that it can be a lonely field sometimes. Years later, when I did study medicine as a mature student, my experience helped me to shape the field of medicine I wanted to work in, and I chose to practice family medicine, a field that has a huge variety on a daily basis and plenty of face-to-face contact.

As a parent, are you encouraging your children to pursue science, too?

Sherratt-Wyer: My children are ages 9 and 7, so they are a bit young for programs through BIOS at this time. However, the ocean fascinates them and they already enjoy snorkeling. I have no doubt they will want to become involved at BIOS as soon as they are old enough.