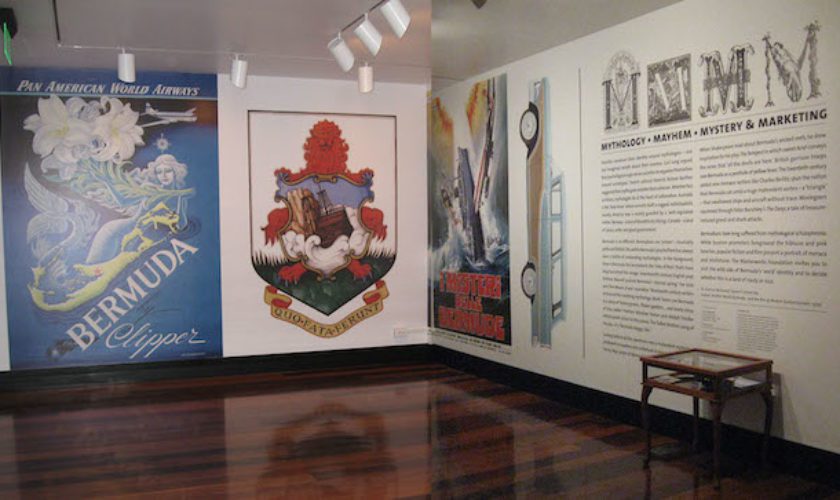 Bermudians have long suffered from mythological schizophrenia. While tourism promoters foreground the hibiscus and pink beaches, popular fiction and film present a portrait of menace and misfortune. This exhibit invites you to visit the wild side of Bermuda’s “vex’d” identity and to decide whether this is a land of nasty or nice.

Societies construct their identity around mythologies – real and imagined beliefs about their essence. Carl Jung argued that psychological urges drove societies to organize themselves around “archetypes.” French cultural theorist Roland Barthes suggested that myths gave societies their cohesion. Whether fact or fiction, mythologies lie at the heart of nationalism. Australia is the “fatal shore” where convicts built a rugged, individualistic society. America was a society guarded by a “well-regulated militia.” Norway – a land of bloodthirsty Vikings. Canada – a land of “peace, order and good government.”

Bermuda is no different. Bermudians are “onions” – invariably polite and “British.”  Yet, within Bermuda’s psyche there has always been a battle of contending mythologies. In the foreground, there is Bermuda the benevolent: the “Isles of Rest.” Poets have long burnished this image. Seventeenth-century English poet Andrew Marvell praised Bermuda’s “eternal spring.” For Irish poet Tom Moore, it was “a paradise.” Nineteenth-century writers enhanced this soothing mythology: Mark Twain saw Bermuda as a place of “breezy groves…flower gardens…, and lovely vistas of blue water.” Painters Winslow Homer and Adolph Treidler added pastel colour to the canvas. The Talbot Brothers sang of the joys of a “Bermuda buggy ride.”

Lurking behind all this sweetness was a malevolent mythology predicated on mayhem and misfortune. In 1593, English adventurer Henry May wrote of Bermuda’s “hie cliffs” and “foule weather.” When Shakespeare read about Bermuda’s wicked reefs, he drew inspiration for his play The Tempest in which sweet Ariel conveys the news that “all the devils are here.” British garrison troops saw Bermuda as a pesthole of yellow fever. The twentieth century added new menace: writers like Charles Berlitz spun the notion that Bermuda sat amid a huge malevolent vortex — a “triangle” — that swallowed ships and aircraft without trace. Moviegoers squirmed through Peter Benchley’s The Deep, a tale of treasure-induced greed and shark attacks.

Thus, Bermudians have long suffered from mythological schizophrenia. While tourism promoters foreground the hibiscus and pink beaches, popular fiction and film present a portrait of menace and misfortune. The Masterworks Foundation invites you to visit the wild side of Bermuda’s “vex’d” identity and to decide whether this is a land of nasty or nice.

Author: Another World: Bermuda and the Rise of Modern Tourism (London: 1999)