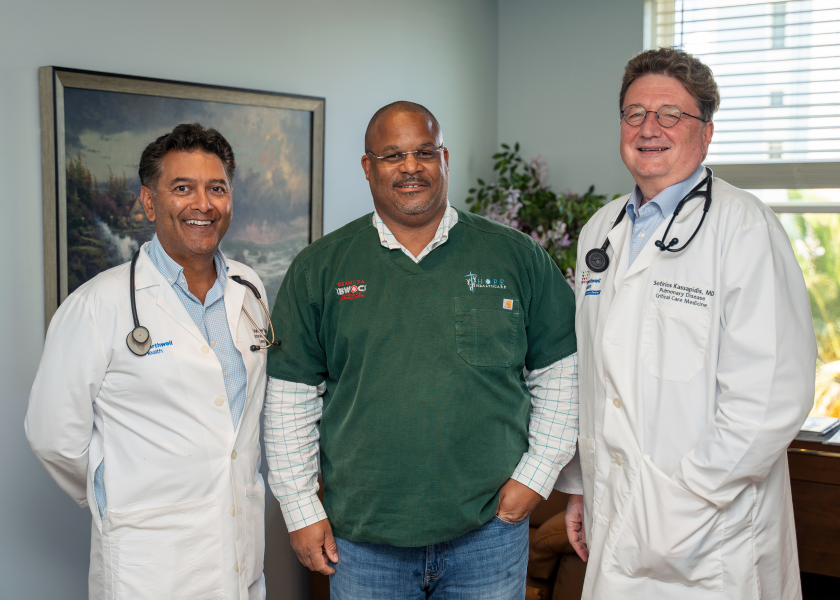 Hope Healthcare has been serving the community since 2003. Led by managing director Dr Brent Williams, it has developed a reputation for providing specialist care that is difficult or impossible to find elsewhere on the island. Some of the expert knowledge behind the practice’s unique offerings stems from its association with two experienced US-based doctors who fly in regularly to see Hope’s Bermudian patients.

Steve Kassapidis, who specialises in pulmonary disease and critical care, and Varinder Singh, a cardiologist, have each hit the headlines with their remarkable professional efforts in recent years. Dr Kassapidis rose to prominence in the spring of 2020 when working on the intensive care front lines in the battle against the deadly first wave of COVID-19 in New York City. With a vaccine still many months away, health-care workers were risking their lives to save others. Thousands were dying and bodies were being placed in refrigerated containers outside the hospitals.

One day in late March of that year, Dr Kassapidis was working in Mount Sinai hospital in Queens. “It was a nightmare, Armageddon — I was exhausted and hungry and I just wanted a turkey sandwich from the deli across the street,” he recalled. “Then a guy from Sky News rammed a microphone in front of me and I guess that was the beginning of my 15 minutes of fame.” In the interview, Dr Kassapidis said, “It’s hell…biblical. People come in, they get intubated, they die. The cycle repeats…9/11 was nothing compared to this— we were open waiting for patients who never came. Now they just keep coming.”

The raw honesty of the interview, providing one of the first insider accounts of the nightmarish events unfolding inside New York’s hospitals, caught international attention. In the months that followed, Dr Kassapidis was a go-to source for the media and appeared on ABC, BBC, Fox News and an Australian news channel, as well as in several newspapers. He remains haunted by the memories: “We didn’t know what we were dealing with. I lost so many friends, including my mentor and my best friend, both physicians. There was nothing we could do for them.” Dr Kassapidis urges people to get vaccinated, warns that further variants are inevitable and laments the widespread disinformation about COVID-19 disseminated online. “If you haven’t seen what this disease can do, then you don’t know what you’re talking about. It’s not the flu. No, Dr Fauci did not make millions out of it. The internet is the bane of our society.”

Dr Kassapidis has been visiting Hope’s patients since 2016. He specialises in asthma, sleep apnea, chronic obstructive pulmonary disease (COPD) and critical care. According to his colleague Dr Williams, the world-class treatments Dr Kassapidis has brought to Hope Healthcare for treating asthma and sleep apnea, in particular, have proved a true asset to the island.

Dr Singh has been treating patients in Bermuda for more than a decade. “I feel like part of the population,” he says. As a cardiologist, his expertise extends all the way from lifestyle, lipids and blood pressure to coronary disease and heart failure. There are several good cardiologists on the island, Dr Singh explains, but the number of practitioners, given the volume of disease they have to deal with, “is not a good ratio.” As an interventional cardiologist, trained to identify and treat blockages caused by blood clots, Dr Singh is unique on-island. Many Bermudians have benefitted from such treatments, including Ottiwell Simmons, the former president of the Bermuda Industrial Union.

In 2018, Mr Simmons was about to have his left leg amputated at Boston’s Lahey Clinic because of a blockage in his vascular system. After getting a second opinion, he was airlifted to Lenox Hill Hospital in New York where Dr Singh is the chairman of cardiovascular medicine – cardiology. As the Royal Gazette reported, Dr Singh and his team removed the clot and saved Mr Simmons’s leg. On leaving the hospital, Mr Simmons had a stroke caused by another clot, which Dr Singh also removed.

Bermuda, says Dr Singh, suffers from “affluenza,” bad diets and inadequate levels of exercise, commonplace in many wealthier western societies, that lead to higher incidence of diabetes, vascular disease and amputations. Consultative care can do much to limit the damage caused by these ailments, says Dr Singh, but a good diet and exercise is the best defence: “Do something aerobic, 30 minutes a day, at least five days a week. And I would recommend the Mediterranean diet — less red meat, more fish and chicken, lots of high-fibre vegetables. It’s the one diet shown in multiple studies to improve longevity.”

To read more of our Profiles in Health, click here!