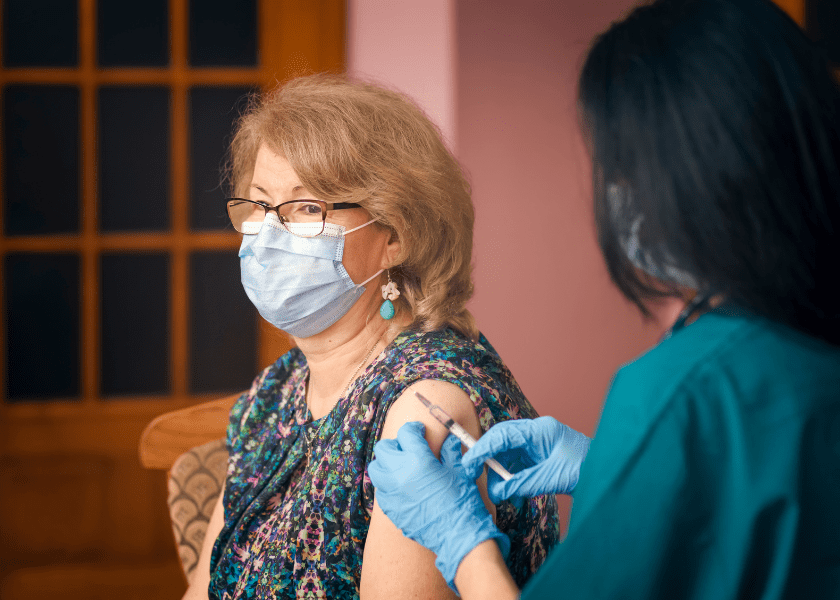 In my Opinion: Elizabeth Jones on Vaccinations

There were two things about my mother I couldn’t understand when I was small. The first was she hated the beautiful Christmas carol, “Silent Night”. Whenever the radio played it, she would turn it off. The second was she’d never in my early years let me play in a shallow brook at the back of our village. Later, the reasons became clear to me, and I think about them now during this Covid pandemic. While she was a pupil at a Catholic boarding school in England in the early 1930s, diphtheria ran rampant and one night before Christmas a girl died of it. My mother and her classmates were required to stand around the bed on which the corpse lay. They held candles and said goodbye to her, singing “Silent Night.”

And the forbidden brook? That also had to do with disease although not diphtheria. By the time I was born in 1950, no one had diphtheria anymore because the vaccine for it had become routine. But polio was a different matter. There was no vaccine for that and several children in the village had contracted it after playing in the brook. Whether it was proven or not, apparently many people, including my mother, were convinced the water had given them the virus. Though I didn’t know the significance of the brook, I do remember being terrified of catching polio. Several children at school were crippled by it. One had an atrophied arm and another died after being confined in an iron lung. When the vaccine for polio came to the village school, there was a special thanksgiving service in the church. Not to have allowed your child to have the vaccine would have been unthinkable.

But parents’ worries were by no means over because there were so many other childhood diseases to contend with, chicken pox, measles, German measles, and mumps being the most common. These illnesses weren’t as terrifying as polio but they could be dangerous and until the 1960s there weren’t vaccines for any of them. I don’t recall any children dying but I do remember one who was hospitalized for weeks with encephalitis after catching measles and another with breathing problems for years after. As for me, rubella or German measles left me with a permanent hearing impairment. I really wish the measles and rubella vaccine had been introduced to the UK earlier than 1968. My Bermudian friend Alison tells me it was worse in Bermuda. During the 1940s and 50s, there were just two vaccinations available: one for tetanus and one for smallpox. Fortunately, she never contracted polio but she did suffer badly from whooping cough and nearly died of measles when she was 21.

So today, as the Covid cases escalate, and deaths tragically go up, I do wonder why some people are resisting vaccination for themselves and their families. However, I can understand that having a vaccination, or watching your child have one, can feel counterintuitive. Why inject a well person? What if something goes wrong? I know I had those fears when our son received his first vaccinations. But those fears were outweighed by the comfort of knowing he and other children in our community would be far more protected with the vaccinations than without.

Right now, I feel so grateful because everyone eligible within my family and my social circle in Bermuda has received their second Covid shot. And grateful because there are, so far, enough vaccines for everyone on the island. I just hope that everyone will choose to benefit from them.