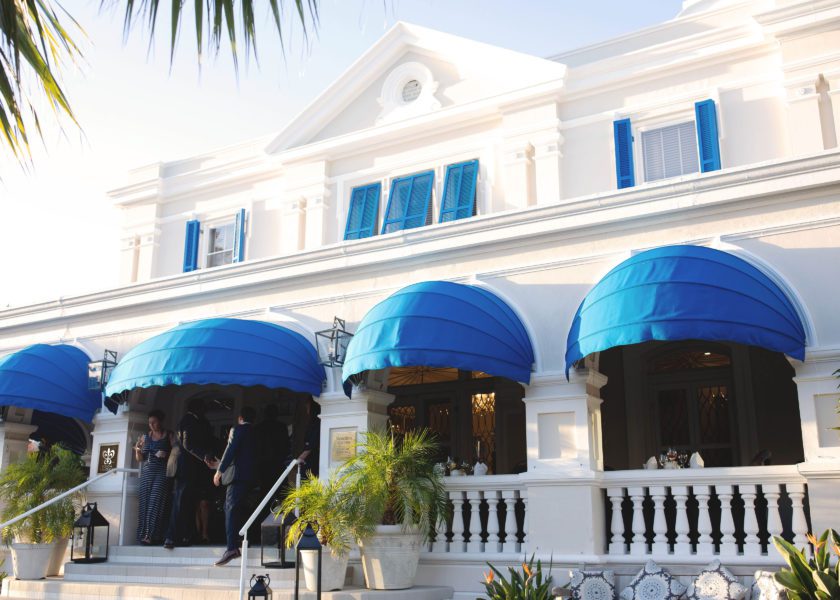 Medical Musings with Dr. Shane Marshall: Eating Out in Bermuda

Have you ever watched Chef’s Table on Netflix? Each episode features a world-renowned chef at the top of their culinary field. I don’t have a sophisticated palate, but I love food, and each episode leaves me intrigued by chef culture. They all seem to be passionate, tortured artists – many heavily tattooed, living life in the fast lane, and obsessed with fresh ingredients. So, a few Sundays ago when I set off to meet Huckleberry’s Chef Matthew at the Rosedon Hotel, I debated whether to mention these impressions. On one hand, I wanted to know if this stereotype was true, but I also knew chefs sometimes had tempers and always had knives. I decided to be polite.

The real reason I was meeting Chef Matthew had to do with a study that appeared in the Lancet a couple months ago. The Lancet is one of the world’s leading medical journals, and the study was funded by Bill and Melinda Gates, so it was a big deal. It was called the Global Burden of Disease Study, and it aimed to document what people die from, and why. No surprise that cardiovascular (heart and blood vessels) disease was number one: in 2017, 10 million deaths were due to cardiovascular disease, less than a million (913,000) were from cancer, and less than half a million (339,000) were from Type 2 diabetes. The big shocker was that for the first time, a poor diet was identified as the number one health risk around the world. Put simply, our diets are killing us.

Here are some other interesting tidbits from the study:

Another surprise finding: excess red meat, processed meat, trans-fats, and sugary drinks – all associated with heart disease – were actually not the problem for most countries. That doesn’t mean they aren’t bad for you – it means, whether through lack of access (low socioeconomic countries) or better education (high socio-economic countries) citizens weren’t binging on these. This goes along with what I hear when I ask patients “How’s your diet?” and they respond “Oh, we hardly ever eat red meat, we try not to fry foods, and we never drink sodas.” The one item everyone seemed to fall down on was salt. Whether in bread, sauces (attention Sushi lovers), or pre-packaged foods, sodium was the biggest killer.

Now, what comes to mind when you think of the Bermudian diet? Mayonnaise? Mac and cheese? Burgers? Or is that just another stereotype? Unfortunately, although 95 countries were studied, Bermuda wasn’t amongst them, so I can’t tell you if Bermuda’s dietary death rate is closer to the US, the UK, or the Caribbean. Regardless, the Lancet study suggests we should all double the amount of whole grains, pulses (beans, peas, and lentils), nuts, fruits, and vegetables in our diets.

So, except for salt, the study’s conclusion isn’t that humans are dying from eating bad stuff, it’s that we’re dying because we don’t eat enough good stuff. That may be hard to understand, but that’s because we tend to regard food choices as either good (salad) or bad (mayo, mac and cheese) with perhaps a third “not too bad” category (peas and rice, but hold the salt). Think of it this way: if you focus on eating healthy food, you’ll have less room for unhealthy filler-uppers. And there are other solutions – any of those food items can shift categories (for example, you can use avocado mayonnaise, whole grain macaroni, and brown instead of white rice).

And what about eating out? It’s challenging enough to eat healthfully at home, but restaurant-dining seems even worse for heart health. So back to Huckleberry’s at the Rosedon Hotel. The first time I ate there, I was hosting our office Christmas party. Since I’m the boss (and a cardiologist and eating out in public), I thought I should set an example and order something with the word “salad” in it. So, I went for the Huckleberry Chopped Salad. The first forkful was a little like the prelude to a seizure: time stands still, the conversation mutes, and you suspect you’re on the threshold of something otherworldly. I stared back at the bowl of greens, then up again at my fellow diners. People asked if I was okay. By the second mouthful, I had regained my senses and declared this the best salad in Bermuda. Honestly, it’s terrific. But is it healthy?

A few months later I was in the kitchen with Chef Matthew to find out. I also secretly wanted my chef-stereotype questions answered but, after introductions, the first thing he did was disarm me with his own question – was I hungry? I don’t know why, but that threw me off. I wasn’t expecting to be fed and, perhaps foolishly, I had just eaten lunch. No problem, he said, we’ll make take-out.

Then he guided me through the preparation and assembly of the Huckleberry Chopped salad while riffing on the importance of local ingredients, sustainable farming, philosophy of dining happiness, kitchen manners, and mandolin usage. The result – the Huckleberry Chopped Salad – is vegetarian (vegan, in fact), gluten-free, and fills you with healthy energy sources. For those who fear a lunchtime salad might leave them weak and undernourished, it can be topped with shrimp, chicken, or local fish. At home we pair it with grilled salmon, but I still like it best straight-up, vegan style. The exact recipe is under wraps, but Chef has allowed me to share my best amateur attempt. So, here goes:

This is what you need from your garden or Lindo’s produce section: Scallions, shallots, fresh cilantro, red cabbage, green cabbage, Napa cabbage, kale, limes, ginger, garlic, an orange, and an avocado. Here’s what you need off the shelf: vegetable oil, olive oil, sesame oil (don’t panic – that sounds like a lot of oil, but you don’t use much), low-sodium soy sauce, balsamic vinegar, tahini, sesame seeds, and peanuts. Here’s how you make it (serves two):

I, for one, welcome the Lancet’s suggestion that we stop talking about what’s bad to eat, and start talking about what’s good. That means every Bermudian, regardless of ethnicity, income, or dress size would benefit from eating more vegetables, fruits, nuts, seeds, beans, lentils, and whole grains. And let’s not forget how Bermudians love to eat out. So, I challenge you when ordering at a restaurant: ask your waiter what’s the healthiest item on the menu. I know – the initial reaction may be a blank stare –­ but, if posed frequently enough, that question eventually filters back to the kitchen, and that’s when dining out healthfully becomes easier for all of us. For me, Chef Matthew’s Huckleberry salad ticks a lot of boxes from the Lancet’s Global Burden of Disease study – it’s packed with vegetables, fruits, nuts and seeds, and proves there are healthy choices out there when you look for them.

Do you know of an awesome healthy dish from your favorite Bermuda restaurant? Tell me about your discoveries, and I’ll share them with readers. Until then, bon appetit!