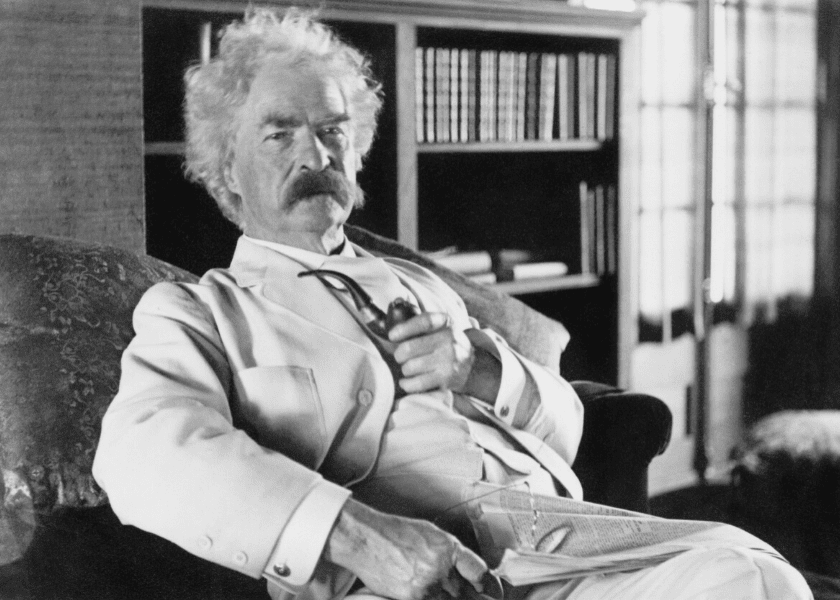 1936 Musings on Mark Twain in Bermuda

The legendary Samuel Clemens called Bermuda the “Happy Islands” when he first came in 1867. On his Centennial Celebration in 1935, The Bermudian mused on Twain’s global star power and how his name drew many famous American’s to the Island. This article has been taken from our archives. It originally appeared in the January 1936 issue of The Bermudian

During a luncheon one day two or three Bermudians were discussing Mark Twain and the extent of that great writer’s influence on Bermuda’s destiny as a resort. One of the group declared that the Colony should erect a statue to the memory of the famous humourist. What a pity this was not done long ago, for what Mark Twain did for Bermuda by the mere fact that he loved the little country is incalculable.

“Americans on their way to Heaven call at Bermuda, and think that they have already arrived.” Surely a magnificent tribute to Bermuda, coming from such a man!

When Samuel Langhorne Clemens first saw the islands in 1867, and again ten years later, the Colony was free, he wrote to a friend, “from the triple curse of railways, telegraphs, and newspapers.” But even though two of these institutions came finally and inevitably, he found the peace of his “Happy Islands” unmarred.

Since he discovered Bermuda for himself, hundreds of celebrated writers have fallen under the spell of the little Colony, among them Rudyard Kipling, Eugene O’Neill, Frances Hodgson Burnett, Sinclair Lewis, Hugh Walpole, Joseph Hergesheimer and countless others. Nearly all of them expressed the hope that Bermudians will continue to bar the general use of automobiles here, and many of the greatest of them troubled to enlarge on the subject in the columns of this magazine and in the local newspapers. But Mark Twain was probably the first among them to contribute his influence against the introduction of motor cars into the placid islands. His illustrious name appeared together with that of Woodrow Wilson, not yet President of the United States, and the names of about a hundred other American lovers of Bermuda, on a petition to the Bermuda Government in 1908 against automobiles.

Yes—Bermuda has reason to remember Mark Twain with affection and regard.

Last November the Colony shared in the Mark Twain Centennial Celebrations and His Excellency the Governor-General voiced Bermuda’s tribute over a world-wide wireless hook-up. In his speech His Excellency quoted a message just received from Mr. Albert Bigelow Paine, Mark Twain’s friend and biographer. It ran:

“I deeply and sincerely regret that circumstances will not permit me to make the trip to Bermuda this season. My wish to be with you on your Mark Twain Memorial night is far greater, I am sure, than your wish to have me there. I remember Bermuda so tenderly, and how Mark Twain loved that magic place—the Happy Islands, as he called that enchanting group.

“I remember the beautiful and beloved Allen household where he was always at home, and the kindness he found there.

“I wish that I might renew all these memories and join in your celebrations. As it is I can only say—thank you for wanting me, and God bless you, everyone!”

It was at the Allen home, Bay House, which overlooks the harbour, that Mark Twain spent most of his time in Bermuda, although he generally reserved a room at the Hamilton Hotel. The late Mr. Will Allen was his dear friend, and that charming home was a Mecca for celebrated visitors from all countries who came to pay personal tribute to the man who, in the words of Lord Curzon, “made the whole world shake with merriment.”

To Bay House came Woodrow Wilson to play bowls and putt golf balls with the great humourist. As often as not the white-polled, white-attired old man would be playing with little Helen Allen, Mr. Will Allen’s daughter and the queen of Mark Twain’s Angel-Fish Club, a coterie of his young Bermuda friends. He called them angel-fish because that ethereal creature of blue and gold symbolized for him all the youth and feminine loveliness.

For he hated old age and once uttered to Mr. Paine the following characteristic reflection:

“If I had been helping the Almighty when he created man, I would have had him begin at the other end, and start human beings with old age. How much better it would have been to start old and have all the bitterness and blindness of age at the beginning… Yes, the Almighty made a poor job of it. I wish he had invited my assistance.”

It was in 1910, the year of his death, that he made his last trip to Bermuda, and not long after his arrival he lay sick at the home of his friends, the Allens.

He would sit in a rocker by the window that looked out on the blue waters of the Sound, where he could see the old ‘Bermudian’, later renamed the ‘Fort Hamilton’, pass by to berth just around the point. Captain Fraser, master of the ship, was another friend of the great man, and he never brought his ship past Bay House, when Mark Twain was in Bermuda, without giving a blast of greeting on the ship’s siren.

While lying ill at the Allen home, although he realized that his condition was grave, he never failed to joke about his illness. Mr. Paine in his biography mentions a curious document on one side of which was written:

In return for my promise to believe

Everything he says hereafter.

On the other side Mark Twain had written:

“The proprietor of the heron before promise desires to part with it on account of ill-health and obliged to go away somewhere so as to let it reciprocate, and will take any reasonable amount for it above 2 per cent of the face because experienced parties think it will not keep in this kind of weather, and is the kind of proppity that don’t give a cuss for cold storage, no how.”

It was during those last days at Bay House that he wrote what was probably his last bit of consecutive writing. It consisted of a letter of advice to Mr. Paine, carefully instructing him regarding matters of etiquette when Mr. Paine should one day be confronted by St. Peter at the Pearly Gates. In part it went thus:

“Upon arrival do not speak to St. Peter until spoken to. It is not your place to begin.

“Do not begin any remark with ‘Say.’

“When applying for a ticket avoid trying to make conversation. If you must talk let the weather alone. St. Peter cares not a damn about the weather. And don’t ask him what time the 4:30 train goes; there aren’t any trains in heaven, except through trains, and the less information you get about them the better for you.

“You can ask him for his autograph—there is no harm in that—but be careful and don’t remark that it is one of the penalties of greatness. He has heard that before.

“Don’t try to kodak him. Hell is full of people who have made that mistake.

“Leave your dog outside. Heaven goes by favour. If it went by merit you would stay out, and the dog would go in.

“Explain to Helen why I don’t come. If you can.”

To Bay House early in April came Mr. Paine in response to a message from Mr. Allen telling him that Mr. Clemens was dangerously ill. At first it was doubtful whether he would be strong enough to withstand the voyage to New York, but he rallied and on April 12th Mr. Allen chartered a tugboat to carry the great man from Bay House to the ship, which sailed that day. Mark Twain died at his home in Elmira eleven days afterwards.

The burial service was performed by his friend, Dr. Henry van Dyke, another celebrated man and another lover of Bermuda.

The centennial speeches in memory of Mark Twain, the articles and eulogies which filled magazines and newspapers all over the world toward the close of last year, the messages from great men of all nations and professions, recall the time of his death, when civilized people the world over mourned his passing. In Mr. Paine’s words:

“No man has ever so reached the heart of the world. Because he was so human every other heart responded to his touch. From every remote corner of the globe cables of condolence swept in; every printed sheet in Christendom was filled with lavish tribute. Pulpits forgot his heresies and paid him honour. No king ever died who received so rich an homage as this…”

There are scores of Bermudians who were friends with Mark Twain. He won the hearts of everybody he met here, and will not be forgotten. For when most of the names that resound in modern literature are forgotten, countless generations yet to come will be shaking with laughter at the gutsy humour of that lovable immortal, Mark Twain.