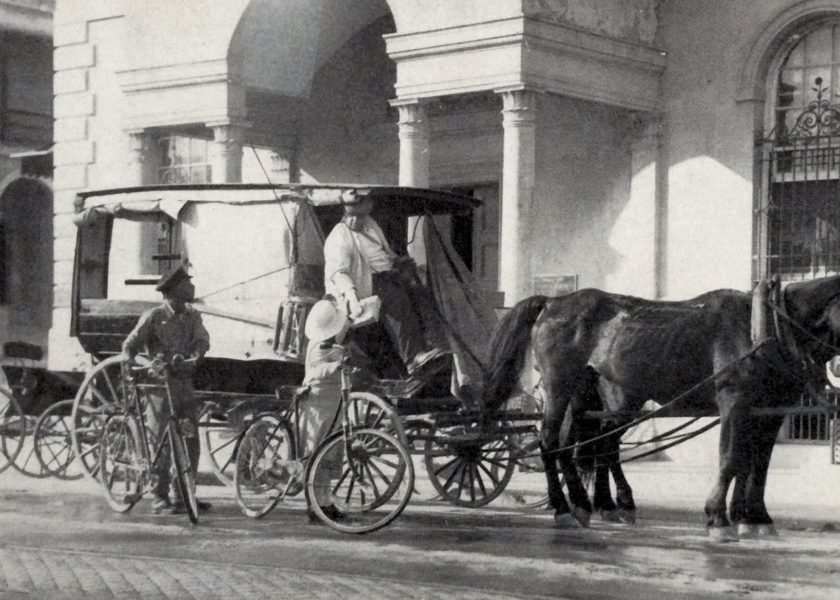 A Ride on The Somerset Express, Circa 1936

An old man, two horses and a carriage filled with people, mail and pretty well anything else that could fit, traveled from Hamilton to Somerset and back again, every day of the week. This article was first published in the September 1936 issue of The Bermudian. It appears here exactly as it did originally.

If you should ever find yourself in a carriage whose driver, an old gentleman, wearing on his arm the license number, 479, you are in the loquacious company of one Augustus James Simons, seasoned hack-driver and raconteur extraordinary. Before you have the time to remark on the fine weather Simons will have taken you back with him to the good old days of nineteen hundred when he used to drive Spurling’s bus from Hamilton to Somerset and return every week-day and alternate Sundays throughout the year:

“I’d hitch up Sally and Jessie and at nine o’clock we’d start with the mail, twenty-odd passengers, a hundred or so parcels, fifty pieces of beef, a barrel of scallops and lots of other things. As we went along Front Street I’d yell out, ‘Anything for Somerset where the locomotives run?’

“You see, they were building the dockyard then, and had a railway system out there. Well, we’d start with a full load and by the time we’d got to Somerset two or three hours later most of the meat and scallops was gone—sold along the road to regular customers—and I sold dresses too. A lady out in Warwick would say to me, ‘Simons, you bring me the newest fashion dress next trip,’ and they always took what I picked out… five years of that driving and selling and carrying mail and personal messages was enough… I’m seventy-one years old, got two good carriages, and I’m still going strong like Johnny Walker whiskey!”

Spurling’s bus to Somerset runs no more, but there is a bus service between Somerset and Hamilton that, like Simons, and only a year younger than he, is still going strong. Back in the year 1866 William Siggins started the Somerset Express. Today, having passed through the hands of three other owners, Burrows, Curtis and Crawley, Graham Ingham owns and drives the bus on week-daily trips from the West End to Hamilton and back again.

The day I took Ingham’s bus—no one calls it the Somerset Express, which is emblazoned on its black sides in eight-inch gold lettering above two oil paintings of a clipper ship—might have been a summer afternoon in 1881 or 1902 except that I was the only passenger seeking transportation “up” to Somerset. As Ingham told me later, “The ferries and the train have cut down the passenger business considerably, though now and then I bring a party of five or six to town.”

Theoretically the bus leaves at 3:00 p. m. That is, if Ingham, who has been resting at Spurling’s stables since his arrival around noontime, has hitched up a fresh pair of horses and left the stable at that time. But it really takes him a good hour to “leave”, for he drives through town stopping every hundred feet or so to take on freight, blowing his tin whistle to let the shopkeepers know that the express is heading west.

I got on in front of Gosling’s as he ambled out of the store—in his checked cap, linen duster and baggy dark trousers. It was almost four o’clock and the bus was well loaded. There was room to sit down, though, with my feet resting on a bag of feed and a crate of mangoes for an arm rest. Ingham tossed in a couple of small packages, dropped some coins in the leather money bag that was slung from his shoulders and rested on his portly stomach, hauled his great weight up on the driver’s seat and we were off—to another shop a block down the street. Pulling up his horses, he gave a blast on the whistle. Two clerks carried out a large clothes hamper and made it fast to the rooftop. As we were about to start off again a woman rode up on her bicycle and said, handing the driver a small paper bag, “This here is for Misses Emmy S— at White Hill.” Ingham took the bag and two Pennies which clinked in the money-bag.

We stopped at three more places, taking on sundry parcels and crates and a lawnmower, which was strapped on to the side. And at five minutes after four the Somerset Express was rumbling out of town on the twelve-mile run to Somerset.

After a mile of easy going, jogging along the level of stretches, walking the hills, we were stopped by a little girl who came running out of the house. “You got the medicine from the Phoenix?” she asked. Ingham teased her about her dirty face and handed her the medicine. Up until then the driver had been silent. The noise of the horses and wheels made it impossible for us to talk back and forth unless we shouted. But now as we rolled along the Middle Road I caught faint snatches of humming. Here was a man who could sing at his work and watch the world go by…

I don’t know how many stops we made at this or that roadside house. I stopped counting after the first fifteen. But for the sinking sun and growing hunger all tract of time was lost as we trundled along, now passing more cyclists and carriages on the road. People were going home from work.

At the top of the hill near Evans Bay Ingham got off the driver’s seat for the second time. Back at the Rising Sun Bar he had rested the horses for five minutes and climbed down off his perch for some refreshment.  This time he gave no blast of his whistle nor unloaded any freight. He hailed a young boy who was working in a nearby field of corn and together they went into an old tin-roofed barn and brought out a horse. The boy walked the horse back and forth between Ingham and then led it back to the barn. As we drove off he shouted to the boy, “Tell your pop I might buy her.”

An hour later at the foot of Scaur Hill a young lad jumped aboard and a bit further on another little boy climbed in. Together they sorted out the remaining bundles and as we neared Somerset they would run ahead with a small package and come dashing out of some store or house and hop on the moving bus. It was almost dark now and the horses and the driver were hustling for the first time. They had been four hours on the road. Home and supper were still over the hill.

It was striking eight when Ingham put my three-shilling fare in his money-bag. I said goodnight and thanked him for the ride. “Glad you enjoyed it,” he answered; “most people do. You can’t really see the countryside from a speedin’ train or bicycle, can you now?”