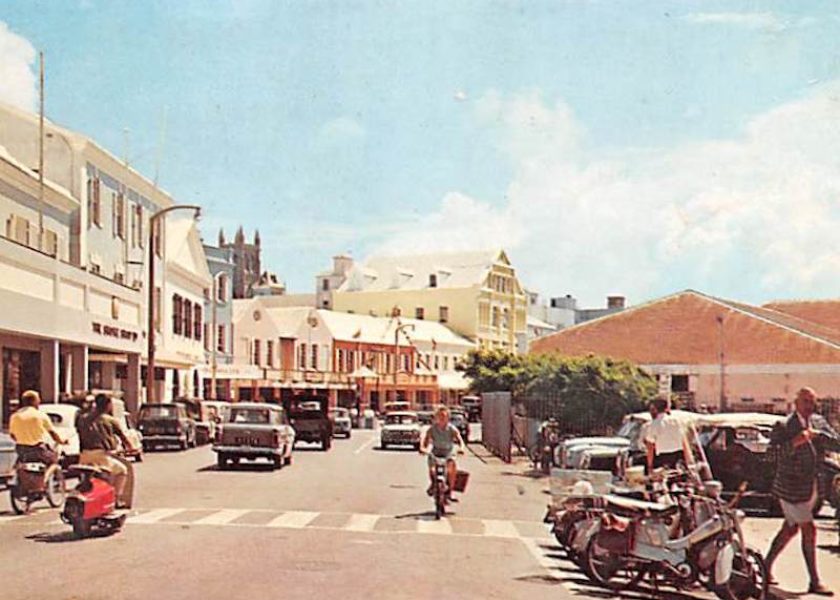 This is a Classic Crow’s Nest from our Archives.

While sipping a cocktail the other day with our good friend Mr R. D. (Robbie) Outerbridge, well-known Front St. businessman and restaurateur, we reveled in hearing again some of the marvellous old Bermuda anecdotes about the great characters that used to walk our streets in the days gone by.

Robbie was good enough to write them down so that we could share them with our readers, and while many will consider them apocryphal, he has assured us that apart from a touch of literary licence, they are true.

Martin Godet and Leonard Minty were custodians of the law and administers of justice. Martin had a heart of steel, Minty’s was closer to a marshmallow. Naturally, offenders strove mightily to get on Minty’s court, and since I was one, you may be assured that I speak the truth.

It seems that one evening Martin and Minty were heading homewards on their bicycles and neither of them had a light. Both were apprehended by their respective Parish constables, and duly charged with breaking the law.

As both charges appeared on the same calendar, a brief conference was obviously in order. Martin being the senior, elected to try Minty, whereupon Minty would then try Martin. Apparently this is how it went:

Martin on the Bench: “Minty, you are charged with riding your cycle without a light. How do you plead?”

Martin: “Very well, as this is a first offence, I shall bind you over, but don’t let it happen again.”

Martin stepped down and Minty took the bench.

Minty: “Godet, you are charged with riding your cycle without a light. How do you plead?”

Minty: “Well, since this is the second offence of this nature to appear before this Court today, I must make an example of you Godet. Ten pounds will be the fine.”

Martin and Minty were not on speaking terms for three months.

By any standards we’ve got to rate Earle Outerbridge as a character. Earle was a farmer and very proud of his calling. Some would call him a philosopher, and some would call him a ‘bloody liar’, which, of course, Earl vehemently denied. Earl had fun, sometimes at the expense of others, but he never hurt a soul, and as everyone of us who knew him will agree, he did indeed enjoy life.

One of Earle’s favourite gambits was to swindle Gosling Brothers out of some empty rum barrels, ostensibly to cut in half and use for watering his cattle. After collecting the barrels, Earle would deposit a couple of gallons of water in them, let them soak for a week or so, giving each a good rocking every day, and then drain the residue off through a piece of cheese cloth into a few gallon bottles that he had acquired along the way. Well, if you take some over-proof rum barrels and put them through Earle’s prescribed treatment, you end up with some pretty lethal stuff, as many of us who have been exposed, will testify.

Earl was made of stern stuff. I recall an occasion when he was trying to clear his property of dead cedar trees with the assistance of a tractor and a length of elderly rope; out came the cedar stump rather prematurely, and unfortunately, Earle was in the path of its trajectory. I am told his comment was: “Get this damn’ cedar tree off me so I can drive this tractor up to the hospital!”

As he was always ahead of his time, it was natural that he installed the first diesel engine in a commercial fishing vessel. One day she wouldn’t start, so Earle, as he told me some years later, “threw some gasoline on the son-of-a-bitch to warm her up.”

Earle, engine and boat all ended up in Flatts inlet, and the only one of the three who survived was Uncle Earle.

Colonel Dill was somewhat before my time, yet I do indeed remember him, for how could anyone who knew him, ever forget him. Tommy had this in common with many of his compeers; he was too big for the small screen that little Bermuda had to offer. Certainly, if his talents had been extended to a broader horizon, who knows what level he might have attained.

Charm, humour, an excellent legal brain, but like his two sons, he never lost the common touch, and perhaps that is worth more than all the tea in China or all the gold in Fort Knox.

A tale is told — for its veracity, I cannot testify – but I am inclined to believe its true.

Tommy and Sir Thomas Astley Cubitt, then Governor of Bermuda, had been imbibing at the Royal Bermuda Yacht Club apparently rather more freely than wisely. The time had come to go and a carriage had been summoned to deliver them to their respective homes. It seems that they entered the carriage on the port side, made brief contact with the interior and departed rather unsteadily on the starboard. Tommy was heard to remark: “Damn it Astley, that was a bloody short trip.” To which the Governor replied: “God almighty, Thomas – I thought we’d never get there.”