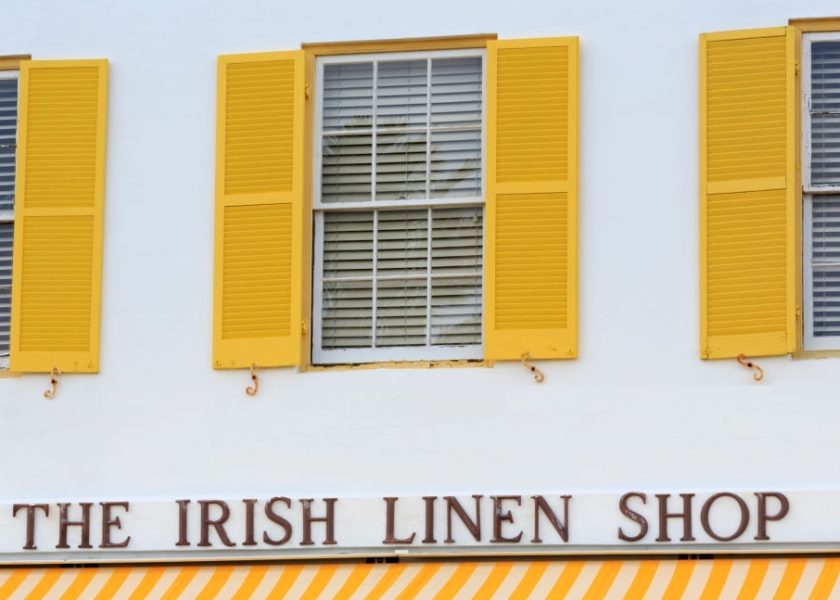 This post was taken from our archives. It first appeared in the Crow’s Nest section of the November 1969 issue of The Bermudian. It is typed exactly how it originally appeared.

We were browsing in The Irish Linen Shop in Hamilton when a lady tourist asked a sales-girl for a 60-inch by 80-inch round tablecloth.

The sales-girl smiled indulgently and said, “Perhaps you mean an oval cloth.” Thereafter, the dialogue when like this:

The salesgirl swallowed hard, and produced a 60-inch by 80-inch oval cloth, but this was rejected as being too expensive. The lady then spotted a 52-inch square cloth, and said, “Well, what’s that?”

Sales-girl: “That’s a 52-inch square, but it could be used on a round table.”

Shopper: “All right, I’ll take three of those.”

As the salesgirl began wrapping them up, the shopper bent towards her and said softly, “Those are round, aren’t they?”

Sales-girl: “No, madam, they are square, but they can be used on round tables.”

Sales-girl: “No, madam, that one was too expensive, remember? However, they will fit an unopened round table.”

Shopper: “Oh, well, it doesn’t matter much as long as they are round.”

The sales-girl’s eyes were darting here and there as if seeking a bolthole. Even we were feeling strangely groggy. Pulling herself together, the sales-girl picked up a pencil and drew a diagram of a square and explained that the cloths she had selected were that shape. “Fine ,” said the shopper, and she paid her bill and headed for the door, clutching her package. There she turned, smiled warmly at the salesgirl, and said, “I’m so glad I could get my 60 by 80 round.”

We suppressed a humane impulse to ask the foundering salesgirl to step out and join us in a quick scotch.