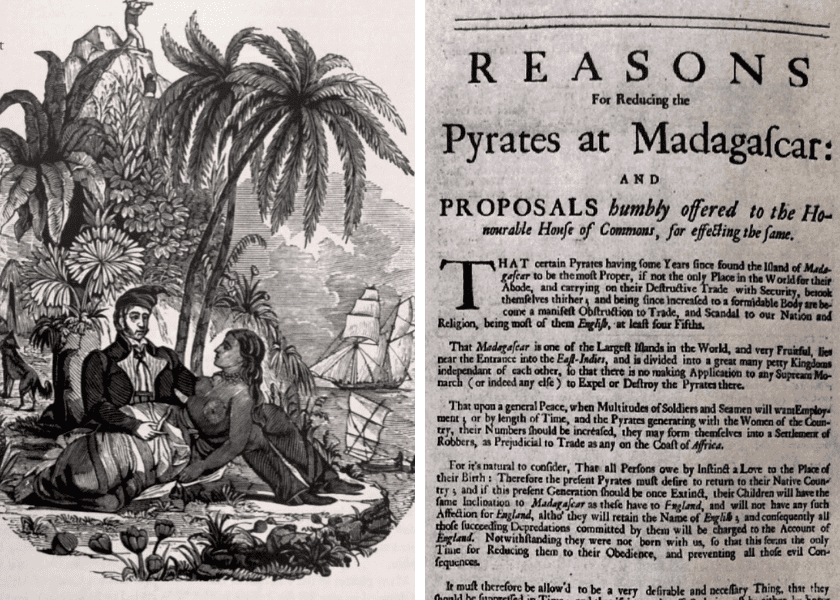 A long way from home, fearless pirates Bowen and North left quite a legacy in the lucrative Far East. This article has been taken from our archives. It originally appeared in the February 1955 issue of The Bermudian.

Of the many colourful characters who became notorious for piracy at the turn of the 17th Century, none were more daring and well-travelled than a pair of Bermudians named Nathaniel North and John Bowen. Of the two, North became the more famous. He spent about eight years in his early career working on various ships in the Caribbean and on the Newfoundland banks, before sailing east to roam more exotic oceans. He spent 15 years in the Far East, six of them accompanied by his own army, conquering the northern part of Madagascar and making forays into the Red Sea, the Persian Gulf and the Malabar Coast. North was known as a fearless pirate. He survived press gangs and Royal Navy attacks, shipwrecks and innumerable hurricanes and typhoons—and eventually became a legend in his own time.

The Far East oceans were not new territory for Western pirates. Rhode Islander Captain Thomas New had amassed great treasures during his pirating escapades, sailing Bermudian cedar sloops to the Indian Ocean. North more than likely had worked on Tew’s sloop in Bermuda before North set to sea as a teenage cook aboard a brigantine owned by a Barbadian with a privateering commission.

In Barbados, North found himself at the mercy of the royal press gangs and was forcibly pressed into the service of H.M.S. Reserve. On arrival in Jamaica, he managed to escape and found subsequent employment for two years aboard a sugar drover, where he learned his maritime experience. He soon tired of this and, barely into his 20s, signed on a brigantine bound for the coast of Spain, embarking on a series of voyages on a variety of boats across the Atlantic and throughout the Caribbean. He was pressed several times into service with the Royal Navy, becoming well-acquainted with the rigours of Navy life—moldy bread, scurvy, salt beef and bad water. He tried to escape several times and on one occasion, managed to swim through shark-infested waters after being severely beaten with the cat of nine tails.

With such experience under his belt, North soon had his own crew. Lured by tales of fabulous riches of the Far East, he set sail for Madagascar. It’s interesting to note that at this time, the lands to the South were still relatively unknown. The voyages of Cook and Bligh would not be carried out for another 70 years or so. Long before these adventurers were born, pirates were successfully navigating these oceans with crude maps. And contrary to popular belief, they weren’t all cruel butchers like Edward Teach (Blackbeard) or Francisco Lolonois. Some, including North, Bowen and Tew, held certain principals and wanted only “to cruise on the Moors (Indian moguls), not intending to pyrate the Europeans, but to honestly and quietly rob what Moors fell their way, and return home with clean consciences and clean, but full, hands.”

Indeed, Author Daniel Defoe painted characters like Bowen and North (upon whom he based his character Captain Singleton in ‘The Pyrates’) as “gentlemen adventurers.” He waxed lyrical over North’s charitable disposition, saying the pirate went out of his way on one occasion to rescue French citizens wrecked south of Madagascar. “A piece of humanity, which ought not to be passed by in silence,” declared Defoe, “for it may shame not a few who carry a face of religion and act with greater barbarity than those whom we hunt, and destroy as nuisances to the world.”

North is generally believed to have arrived in Madagascar about 1697. By the time his ship, Pelican, was reported in the Indian Ocean about 1696, Tew was dead, with a bullet to the stomach. Captain William Kidd had arrived, sent by the British to hunt down Tew, but in fact, he and his backers were more interested in the treasure such rogues had taken. In the end, the temptation was too great and Kidd turned pirate himself, taking many a fine ship and becoming one of the hunted.

North set out first to cruise to Commoro Island, between Madagascar’s north coast and Africa. At the islands in the chain called Johanna and Mayotta, North made raids on the local kings and raked in a fortune of silver chains and other riches. He returned to Madagascar and was caught by a hurricane. The old Pelican being beyond repair, North and his men transferred to another vessel, the Dolphin.

Many pirates in the Far East at this time decided to give up their trade and return home. Even more did so on the subsequent trip to the Nicobar Islands. There, they were met by three Royal Navy ships offering amnesties. But North didn’t trust the envoys or the documents, with good reason as it turned out. On their return to England, many pirates were put on trial and many sent to the gallows.

Around this time, North’s crew completed their last voyage, thanks to a vicious storm that destroyed their vessel. As far as is known, no one survived except North, who was saved by his ability to swim long distances (some witnesses said he could cover an amazing “four leagues” (12 miles). This time, North was rescued by a fisherwoman who took him back to her village on an island north of Madagascar. The villagers, having never seen a white man before, took one look at North’s emaciated white body and fled for the kills, believing they’d seen a reincarnated “Sea Devil.”

North stayed at this idyllic spot for about a year, until one day a visiting French trader arrived, who turned out to be a pirate named Forgette. An agreement was reached to take North on board, and on the return voyage, take him to Mathelage in northern Madagascar. It was upon arrival here around 1701 that North met up with another Bermudian—none other than John Bowen. Known for his excellent navigation skills, Bowen was the nephew of Bermuda surveyor Richard Norwood, and he had been accepted into the pirating “brotherhood” with a vessel named the Speaker.

Bowen’s early career was similar to North’s, with trips through the Caribbean. In 1698, he was captured by French pirates (perhaps by Forgette), who, realising his navigation skills, kept him on board for a journey to the Guinea Coast of Africa. Bowen later sailed to Madagascar and was accepted into the brotherhood as captain of his own boat. In 1700, after their meeting, Bowen made North his quartermaster and they set off on a successful voyage to the Persian Gulf. They returned via Mauritius, sailing through uncharted reefs, and the duo soon found themselves firmly up on St. Thomas reef near the island. However, Bowen and North made it to shore with their treasures and immediately set about purchasing their immigration rights with the local governor. When all the parties were satisfied, they settled down for a well deserved rest as honourable citizens of Mauritius. A year later, the pair bought a Dutch sloop and sailed back to Madagascar and the rich spoils of the Arabian Coast.

By 1703, with many more successful raiding voyages behind them, both must have known their pirating days were numbered. They knew it was only a matter of time before Royal Navy ships and pirate hunters came looking for them. (In later years, Woodes Rogers—who would later rescue stranded seaman Alexander Selkirk (Robinson Crusoe) and become governor of the Bahamas in 1718—arrived with pardons for pirates who wanted them and the end of a rope for those who did not.)

In Madagascar, Bowen and North decided to complete one more good voyage and consequently set off aboard the Speedy Return on what was now a well-worn route to their rich hunting grounds. But the Speedy Return had the unfortunately luck to sail into yet another typhoon. Eventually, they reached the Arabian Gulf, they came upon seven Moorish ships and took many of them captive. By now, the crew was feeling battered, though highly successful. On the Cochin coast, Bowen and North entertained local dignitaries and merchants and traded their amassed cargoes for Spanish and Indian gold and silver. Each had amassed huge fortunes, and most of their crew decided to hang up their cutlasses.

The pair boarded the best of the captured Moorish ships (vessels often built by the Portuguese and set sail for the Mascarenas, located between Mauritius and Madagascar. Here, Bowen and his crew decided to spend the rest of their days—he eventually died of Dry Stomach disease (yellow fever). North and his ship made for the north-eastern coast of Madagascar and went ashore to rest. North played diplomat in the region, settling accounts between natives and pirates and they all settled down to live amicably for some three years. Now in his early 30s, North ran coffee and sugar plantations and had a family of his own.

Eventually North decided to explore southern Madagascar. He put together an army of 50 whites and 300 natives and set off—this time on a dry land adventure. At a place called Mangora (Manangora), North’s army arrived to find the whole country locked in a savage civil war. With superior tactics and companies headed by his henchmen (pirates), North’s forces beat back the opposing armies to the sanctuary of their large city. North knew they could progress no further while they had the mass of armed men at their backs. So he and his men prepared bamboo grenades and other explosive devices. For the next few days North and his men used the native force as a shield against a hail of missiles and arrows, while his musketeers endeavored to pick off defenders at strategic points.

Finally, when the opposing forces on the ramparts were sufficiently reduced, North and a small group rushed the gates and blew up the front gates. What followed was utter carnage, as North’s huge native force rose up, rushed the gaping hole and quickly put the town to a “very Greate Slaughter,” capturing more than 3,000 prisoners.

Elated with his success, the chieftain who had been North’s erstwhile ally reneged on his deal and left North with no treasure or slaves. His pirates, infuriated by the outcome, were ready to “do greate murder amongst them,” but North prevailed on them not to do so. Without giving the chieftain a chance to organize himself, North’s men rushed into his encampment, taking him and his staff prisoner. In the end, they captured 500 cattle, 1,000 slaves and the chieftain’s complete subjection to North’s authority over the land.

The next few years saw North and his men involved in numerous wars and skirmishes, a few pirating expeditions and several trips to the west coast of the Commoro Islands to trade for “Samsams”—Asians slaves highly sought for trading.

Weary of it all and ready to return to his plantations, North arrived back at Anbonavoula, drew up his will (by now he was nearing 40) and took advantage of a sudden peace as he waited for the typhoon season to end. But it was now that he was treacherously set upon by agents of a southern army of Timouses. North was apparently surprised and speared to death by the attackers around 1712. Infuriated, his crew met the invading army head on, slaughtering nearly all of them in a frenzy that sparked a seven-year war. The fighting culminated in the conquest of the whole island in 1718 by North’s crew.

By this time, the so-called Age of Piracy was over. Its key players and their Hollywood-style adventures can be traced through obscure documents, amnesties, and legends passed down through the ages. They are also written up in more accurate accounts. One of the best of these is Defoe’s ‘The Pyrates’, an epic on the lives of the century’s bravest adventurers, including Bermudians Bowen and North.