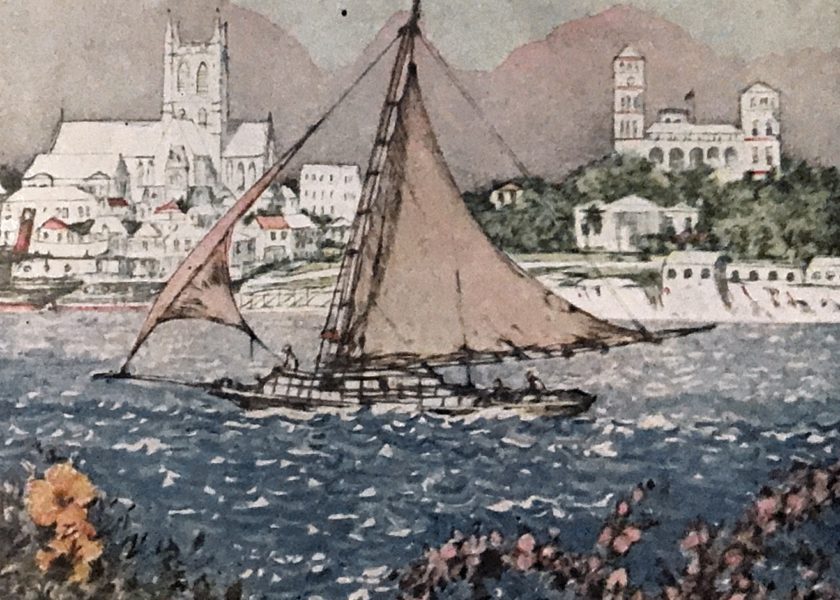 This article was taken from our archives. It first appeared in the March 1935 issue of The Bermudian.

With this issue we mark the fifth year of life for The Bermudian. During those years Bermuda itself seems to have suffered little radical change, but as the Island possesses the same tranquil charm as ever and has as enhanced reputation as a resort, it is indicated that she has paid some reluctant tribute to that axiom of Progress — that all must retrograde which do not advance. Our profit and loss statement for the Colony over the five-year period would go something like this:

Gained — The Bermuda Railway, which being somewhat akin to the Toonerville Trolley of the “funny papers” is the only sort of railway for Bermuda to boast about; that impossible establishment the Castle Harbour Hotel; those two peerless luxury liners the Monarch and the Queen, larger ships to bring vaster crowds of visitors to these fair shores; and two Knighthoods for two distinguished Bermudians, Sir Harry Watlington and Sir Stanley Spurling. We might add to this list an almost monthly expectation of an air service between New York and Bermuda.

Losses — that gallant officer and thorough gentleman, Lieutenant-General Sir Louis Jean Bols; the Hon. J. P. Hand, Bermuda’s brilliant “ambassador” whose energetic labours in the interests of Bermuda entitle him to a permanent place in her Hall of Fame; and Dr. Francis Landey Patton, Bermuda’s most distinguished scholar.

Curiously enough, however, the change that seems most notable to us is that Mr. A. W. Bluck is no longer Mayor of Hamilton. Glad we are that the automobile, that perennial menace to the peace of the Islands, seems no nearer than it did five years ago.

That lively magazine The New Yorker recently printed something about the tearful slaughter by automobiles in the United States. Late estimates show that an American child stands one chance in three of meeting death or mutilation by a motor vehicle.

“Statistically,” says The New Yorker, “the automobile is life’s ugliest joke… the figures are incredible and make war seem like a spring outing. The automotive carnage cannot be blamed on makers of cars, with their legitimate dreams of airflow and streamline. The evil is intrinsic, not special. Of late the fun has begun to turn sour. If things don’t improve, we intend to pack up for Bermuda, the motorless isle, and give ourself over happily to breaking the spirit of a British bicycle.”

We are glad the New Yorkers find a motorless isle alluring, for we’re pretty hipped on the subject of automobiles too. We would hate to see them here. Only the other day a letter came from Joseph Hergesheimer, a famous novelist and widely travelled man whose books indicate a particular interest in analysing the charm and character of various territories. He too mentions automobiles in connection with Bermuda and writes: “This [the introduction of cars] would, of course, be a mistake too serious even to measure now. It would not only make Bermuda, on its present roads, singularly dangerous — bicycles are almost perilous! — but take away from Bermuda its greatest distinction and charm in a world almost everywhere surrendered to noise and insane speed. Bermuda has a peculiar and limited attractiveness, a form of beauty, like a flower, in petto; any interference with that would at once spoil its validity. With automobiles in Bermuda I would never, I promise you, come back.”