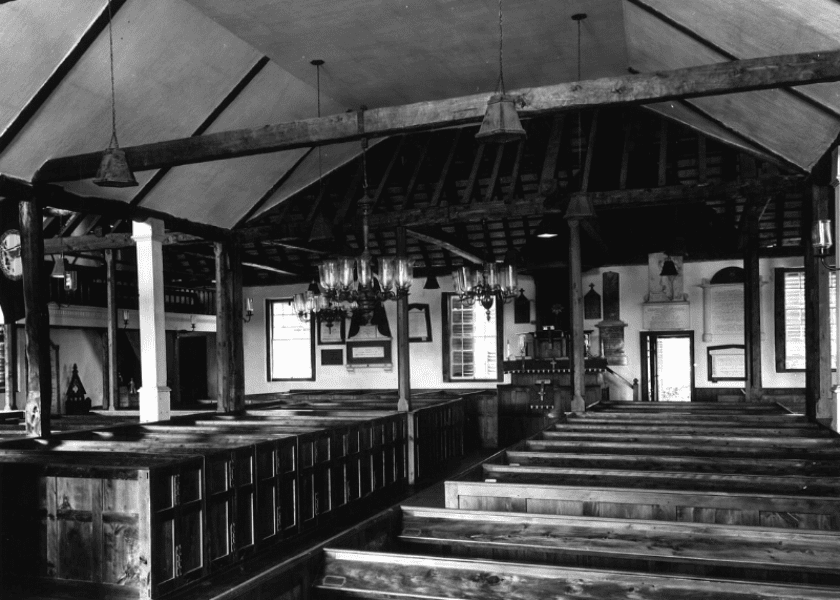 Bermuda is a small island, which means that everything needed for a nation’s infrastructure is packed close together. Everywhere has a story to go with it from the centuries of human history the island has experienced, and the millions of years of natural history it endured before. Take a look at our top picks for the best historical sites for:

1. Seafaring: Pilot Darrell’s House
If you’re a seafaring enthusiast, you’ll know that Bermuda’s economy has always been a maritime one. In the early years of settlement, slaves were imported to the island, and had to learn seafaring skills, rather than work in plantations as in the U.S.

One of these slaves was James “Jemmy” Darrell, a skilled pilot who guided foreign boats inshore through Bermuda’s treacherous system of reefs. The numerous reefs have claimed over 100 wrecks, so pilots with extensive knowledge about their location were invaluable.

When he was 47, he guided Rear Admiral George Murray’s ship in to what is now known as Murray’s anchorage. The admiral was so impressed that he wrote to the governor to ask for his freedom.

With his great skill, Darrell continued to be a successful pilot, and was the first black person to buy a house in Bermuda. You can visit the historic house on Aunt Peggy’s Lane in the town of St. George.

2. Out-of-the-Way Excursion: Carter House
Fancy taking a trip out of town? This historic site is in the most out-of-the-way of places, standing on the side of the road in St. David’s. When the whole of St. David’s island was occupied by the U.S. military, they were prudent enough to conserve the little cottage, which was one of the very first houses built in Bermuda.

After the Sea Venture’s colonists wrecked on Bermuda’s shores, they quickly built another boat to continue on to Virginia, to support the colony there. However, 3 men were asked to stay behind to continue British legacy in Bermuda. Christopher Carter was one of these men, and his descendents build Carter House in 1640.

The house is mostly in its original condition, having withstood countless hurricanes since it was built. It now contains a museum focusing on the history of St. David’s.

3. Environmental Enthusiasts: Natural History Museum at BAMZ
An old classic, the Natural History Museum at the Bermuda Aquarium, Museum & Zoo (BAMZ) contains a wealth of knowledge about Bermuda’s natural history. In a central section, the museum runs a movie on loop about the colonisation of the island by animals, as well as various artifacts and taxidermy specimens. In one wing, life-sized models of various environments in Bermuda are portrayed, with characteristic species stuffed.

There is also a small dry and wet collection display, along with pinned insects, seeds, and invertebrate carapaces. This is only part of the total collection, and with special permission, members of the public can access the upper floor of the museum and its offices.

Here the curator keeps the excess collection items, and the natural history library can be found. Entrance to the museum is included in a ticket to the whole of BAMZ.

4. Entertainment: Camden House
Camden House is all about pomp and circumstance. Located in picturesque Botanical Gardens, it lies empty for most of the year in all its splendour. It is the official residence of Bermuda’s premiere, but the government official does not choose to live there.

The historic house is open for carol services in December, which is also attended by the island’s premier. In addition, it is sometimes used to entertain visiting dignitaries, and Margaret Thatcher and Princess Margaret have both dined here.

The house’s former owner created a factory for arrowroot behind the house, which is now home to the Masterworks Art Gallery. Botanical Gardens’ iconic aviary is also behind the house, as well as a vegetable garden.

5. Black History: Samaritans Lodge
This building, on the corner of Water Street, was the historic headquarters of Order of Good Samaritans & Daughters of Samaria, an organization designed to empower and help former slaves after the abolition of slavery in Bermuda.

The building is now home to the Bermuda Heritage Museum, the only museum dedicated to black history on island. It curates a selection of artefacts associated with the legacy of slavery on island.

The iconic mobylette receives pride of place, and the museum has over 100 motorbikes, as well as 15 classic cars. It also includes a horse carriage made of cedar. The museum also includes some interesting marine transportation methods, like boat engines, and nods to America’s Cup.

Situated in Dockyard, the museum occupies a high-ceilinged historic building, flooded with light and able to hold all the large old pieces on display.

7. Mitchell House
Originally built by Walter Mitchell, the house was most notably owned by a successful black Bermudian couple. The couple owned their own slaves, and ran a restaurant in the town of St. George’s, called The Gun Tavern, which was very profitable.

The house changed owners many times, and various additions were made from its construction to the 19th century. It has been home to families and widows, and has been used to run a private tutoring business, as well as a hotel and tavern.

The kitchen is pristinely preserved, with various cooking implements from an 18th century home. Notably, the house includes a letter from George Washington, a 300-year-old bible, and knives for whale flensing.

In the garden, there is a well, which has been there at least since the 1820s, and was probably the well for the whole town in the 17th and 18th centuries. Owned and run by the St.George’s Historical Society, Mitchell House is now a museum, and its cellar houses an artist’s studio, as well as a vintage printing press, which was used to print the island’s first newspaper.

8. Botany: Waterville
Waterville is a double-whammy for plant lovers – it’s situated right next to Aburfeldy plant nursery, and its own grounds have been beautifully maintained for many years. It used to hold a large tamarind tree, but this was uprooted by hurricane Fabian. There is a heritage rose garden, which was planted in 1988 by the Bermuda Rose Society, as well as a splendid gazebo and memorial garden for Mary-Jean Mitchell Green.

In addition, the house is a historical landmark in itself as it was the first location of the iconic Trimingham’s Department store, and the homestead of the Trimingham family. The waterfront docks edging the property received many Trimingham’s goods shipments.

It is now the headquarters of the Bermuda National Trust, and houses a museum in part of the house itself.

9. Natural Structures: Bermuda’s Caves
Humans have created an impressive array of historical artefacts found in Bermuda, but the natural world has too – don’t forget to explore the historic natural structures Bermuda can offer.

Most of Bermuda’s caves formed in the Pleistocene Ice Age in the very early years of the island’s formation. Over time, dissolved calcium carbonate in rainwater filtering through limestone has sculpted Bermuda’s below ground landscape. The caves can only form with through the action of freshwater, and some are “drowned” today because sea levels rose after their formation.

Caves take millions of years to form, but that history can be wiped in a second. Many of Bermuda’s caves are subject to vandalism by members of the public, and stalactites and stalagmites have been removed.

In addition, some caves are only able to create these impressive forms, and foster biodiversity hotspots, because the environment is so stable. Temperature and humidity fluctuate very little. The introduction of a large life form like a human, even if only visiting for a short time, can disrupt that stable habitat.

Examples of interesting caves to visit include crystal caves, Admiral’s Cave, and the caves in Tom Moore’s Jungle, all located near each other in the east end.

10. Politics: Old State House
How could we forget that St. George was, for a time, the capital of Bermuda. This is where the first Bermudians came ashore from their wrecked Sea Venture. Most of the olde town is preserved because the capital moved to Hamilton almost overnight.

The old state house was built in 1620, just a few years after Bermuda’s settlement. It is the oldest building in Bermuda, held together by turtle oil and lime. Cabinet sessions were held here until 1815.

Now, the old state house is part of the pomp and circumstance of the Peppercorn Ceremony. In this ceremony, the governor of Bermuda allows the freemasons of Bermuda to use the state house for their own business, charging only a symbolic rent of one peppercorn.

During the peppercorn ceremony, the rent is paid in an elaborate ceremony, which the governor, the premier, the mayor of St. George, and the freemasons all attend in formal regalia.

You can visit the flat-roofed building just off of the town square in St. George, however, it is used by the freemasons and can’t be visited inside very easily.

11. History of the Land: Spittal Pond
Spittal Pond is the largest nature reserve in Bermuda, sprawling over 64 acres. How this much land got to be protected is a historical exhibit within itself. When people first began to formally own land in Bermuda, strips of land that were long and thin, with boat access on both North and South shore, were the most desirable. This was to enable boat owners to have ease of transportation by being able to moor their boats on either side of the island.

In 1946, the first of the ten strips of land that would combine to make up the entire reserve was bought. It was undesirable for development because it was marshy, containing the island’s only salt marsh. Even then, the importance of such a reserve was known.

The park was originally supposed to be closed to the public to create a quiet reserve for birds, but eventually the need for national parks superseded this desire, and the current trail was constructed in order to give visitors a view of the pond, but to keep them out of essential bird habitat. The pond and reserve supports various native Bermuda birds, 20 species regularly winter here, and over 200 species have been recorded by birdwatchers.

Aside from natural history, the reserve also contains Jeffrey’s Cave, an important African Diaspora Heritage site where a slave concealed himself, and Portuguese rock, an engraving on the rock face from settlers from the 1500s.

“The checkerboard” is an impressive geological formation resulting from the movement of plate tectonics millions of years ago. During the whaling era in Bermuda, the checkerboard was used as a space to process whales on shore.

12. Religion: St. Peter’s Church
If you are a Christian, or simply interested in the religion of a tiny island like Bermuda, then St. Peter’s Church is a must visit. It is believed to be the oldest continually used Anglican church in the western hemisphere.

The structure in place today was the first church in Bermuda, but it replaced a more ram-shackle place of worship, made of timber and palmetto leaves, which was destroyed in a hurricane.

The island’s first Governor, Richard Moore, oversaw the building of the church in 1615, and the original wooden altar is still in use. Inside, the church is made of cedar, with an exposed ceiling, and is lighted by candle chandeliers. It has the remains of a separate chamber on the west side of the church, which enabled black people to attend segregated services.

The church grounds also house a graveyard, where some of the tombstones are more than 3 centuries old. This graveyard was also segregated, with an area for whites and black slaves. Later, an area for Christian blacks was also created.