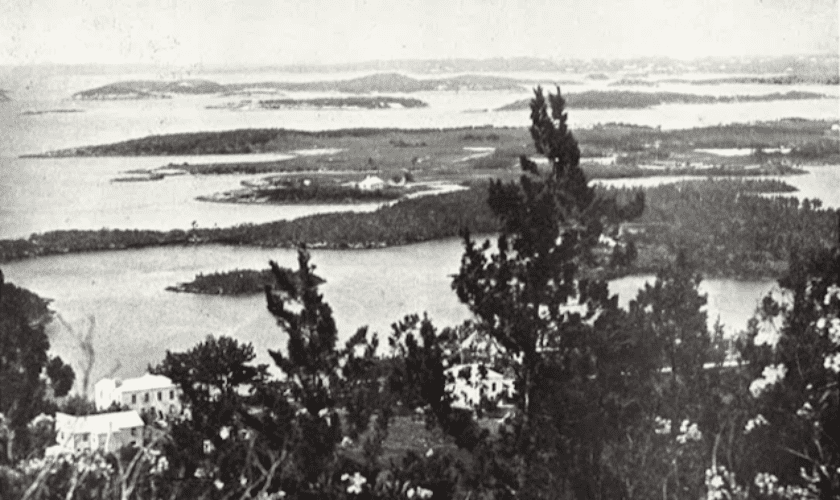 1940 – From the First Issue of The Bermudian

This article was taken from our archives. It originally appeared in the first ever issue of The Bermudian in February 1930. It appears here exactly as it did originally.

It was November 1940, and the Old Bermudian was coming home, having been away from his beloved Island for ten long years.

He had boarded one of the New York-Bermuda hundred passenger air yachts at ten o’clock in the morning, stopped off an hour for luncheon at one of the mid-ocean airports and—now, at half-past four in the afternoon, he was in sight of home.

There in the distance—a mere speck—lay Bermuda.

Being no respecter of shoals, the pilot had the nose of the big, four-motored amphibian pointed straight for Ireland’s Island and, coming nearer and nearer, cleaving its way through the air at a speed of one hundred miles per hour, the bird-like craft was soon over the Dock Yards, flying at fifteen hundred feet altitude.

Peering out of his window, the Old Bermudian’s gaze fell upon a handsome, rambling edifice standing on the site of the old Princess Hotel. He nudged his travelling companion who was dozing on the lounge just across the aisle.

“Might I ask what building that is,” inquired the Old Bermudian, pointing downward.

“That, why that is the New Princess. It was finished in 1932. Haven’t you seen it before?”

“Then you’ll see a lot of new things, Sir. I’ll point them out as we fly past.”

By now the plane was flying quite low, nosing down preparatory to landing.

“You’ll make the improvement in the appearance of the Bermudiana. They’ve put a new roof on and made it conform more to the Bermuda style of architecture. And do you see that beautiful new structure standing on the site of the old Point Pleasant Hotel? The one with the yacht basin filled with yachts and motor-boats? That’s the new Yacht Club?”

“The new Yacht Club? Well, well, well. So they finally got together did they?”

“Over to your left and back you’ll catch a glimpse of the new public gardens. Hurry or you’ll miss it. They must be having a band concert this afternoon. Yes. There’s the band and the new amphitheater seating a thousand people. You can also see the new swimming pool which is one of the largest outdoor pools in the world, and the tea gardens, the new convention halls, the new race track, tennis courts and polo fields. It’s a wonderful layout, one of the most complete to be found anywhere in the world. Everybody goes there in the afternoon to listen to the concerts. Greatest thing that ever happened.”

“What effect has it had on the beaches on the south shore?”

“Oh, none. They’re as popular as ever. There are ever so many people who prefer the surf and the beaches are always crowded. It popularized then a great deal when the Board of Works improved the roads as they’ve done.”

“I hadn’t heard about that. What happened?”

“Well, there are now two almost gradeless roads leading to the south shore. One from the end of the lane and the other from Darrell’s wharf. They’ve eliminated the hills entirely and made the roads wide and paved them. The main roads are all paved now and lined with palms and lighted up at night.”

“Great Scott, do you mean to tell me they’ve done all those things since I’ve been away? You don’t mean to say they’ve taken the bumps out of Front Street!”

“That they have. You’ll notice too that there are no longer any unsightly telephone poles. The wires are all underground now, telephone and electric.”

“Right below you’ll see one of the new ferries. They have double-deckers and they’ve built ferry slips and operate on a regular schedule and everything.”

“Do you mean to say they’ve done away with the old turnstile in the Transportation Building and that I can go through now and not get bumped into at every turn?”

“Yes, I do. They have separate entrances and exits. If you have a bicycle, you simply walk onto the upper deck where they have racks, put your wheel in a stall and descend a broad staircase to the spotlessly-clean passenger deck where the seats are all comfortably cushioned.”

It looked for a moment as if the Old Bermudian was going to faint, but an ever-alert steward handed him a whiskey and soda which he hastily gulped down.

The plane was now being “taxied” toward its hangars on White’s Island.

While waiting for his baggage to be carried off and inspected, the Old Bermudian gazed towards Hamilton. He could hardly restrain himself at what he saw. Rows of new, up-to-date stores, thoroughly modern and yet giving the same Bermudian affect of the ones they had replaced.

He made inquiry concerning them and discovered that since he left the Island, ten years before, a planning commission has been empowered to pass upon on building plans and that one of the things it emphasized most was that the Bermuda style of architecture must prevail. There was one large building he had noticed from the plane. He learned that it was one of the five new schools constructed during his absence.

As the Old Bermudian and his companion drove away, both greeted a kindly appearing gentleman standing on the sidewalk.

“Still Mayor?” the Bermudian asked after they had passed by.

“Still Mayor,” was the reply.

Suddenly there loomed up, just ahead of their carriage, a white object traveling on wheels.

“Don’t tell me they’ve completed the railroad,” he stammered in a someone incredulous tone.

It was another shock to the Old Bermudian. “Driver,” he ordered, addressing the liveried “man-on-the-box,” “take us to the New Windsor. I needs must have another drink.”

As they stood face to face with their whiskey and soda, the Old Bermudian’s friend said to him: “Well, what do you think of it all?”

“I think it’s just great. Bermuda modernized and yet unspoiled. I didn’t think it could be done.”

“Well,” said his friend, “ten years ago there were a lot of people who felt the same way about it. But finally, how it came about no one knows, everyone seemed to submerge his own interest and start working for the good of the whole Island. They’ve all benefited from it. The colony is wealthier than it ever was before, living conditions have improved and everyone seems happier.”

Just at that moment the Old Bermudian happened to think of something.

“I must send a cable. I don’t suppose that office has changed any. DO they still charge one and six the word?”

“Oh, my dear fellow, you have been away a long time, haven’t you? Didn’t you know that you could step right into the booth here and ask the telephone operator to call New York, or London or even Cairo for you?”

A boy appeared in the bar.

“Extra paper, Sir?” he questioned. “All about women getting the vote.”

The Old Bermudian bought one. “Well, well,” he finally remarked. “I never thought they’d come to a point of admitting women were ‘persons.’”

Just as he was about to collapse, his friend grasped him by the arm, steadied him, poured a glass of whisky out for him and bade him drink.