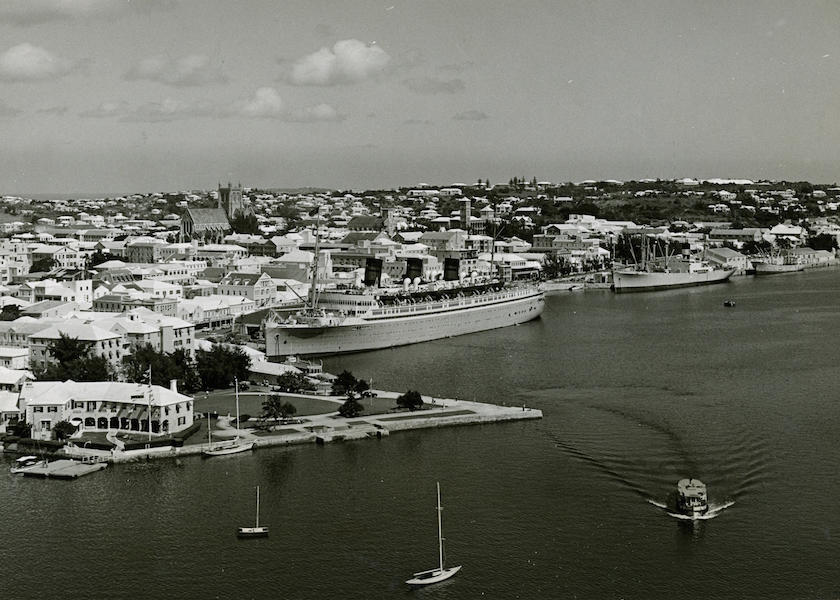 Dallying at the Docks

This article was taken from our archives. It first appeared in the June 1969 issue of The Bermudian. It appears here exactly as it did originally.

An hour or so spent wandering leisurely along Hamilton’s waterfront can be a rewarding experience if you are observant and in a properly receptive mood. Moreover, you are likely to encounter many an engaging personality while you are about it. Take Grumbo, for instance.

Grumbo had awakened that Monday morning to the instant knowledge that once again he was to pay heavily for ignoring, the night before, the dull but sensible precepts for healthy living. Groaning unhappily, Grumbo now lowered his arthritic legs to the floor and shuffled to the wash basin where he rinsed away the cottonwool taste from his mouth, completed his morning toilet, and got dressed in flannel-trousers, a pair of badly scuffed army boots (a gift from the now defunct Bermuda Volunteer Rifle Corps), a tattered tweed jacket and a frayed straw hat. Then, with a final misanthropic grunt, he headed for the Hamilton waterfront.

One might say Grumbo is, and has been for more than 30 years, in the packaging business, and although his wrapping technique may not be up to Front Street merchant’s standards, he is not without clientele. After collection all the loose paper and string he can find, Grumbo stations himself on one of the wharves and awaits the arrival of the commercial fishing fleet, laden with its harvest from the island’s offshore fishing grounds. After the fish have been cleaned, he wraps them up for customers and receives a little something towards his “Oh-be-joyful” hours which he may elect to enjoy at any time of the morning or afternoon at his favourite tavern nearby.

On this Monday morning Grumbo stood at the corner of Parliament and Front Streets with a glow of exhilaration on his deeply-lined face. The sidewalks were overflowing with trash awaiting collection by the garbage trucks. Grumbo, chuckling delightedly, lurched forward in his “upright-to-backward” posture (probably caused by his arthritis) and made for A.S. Cooper & Sons. “Mister Cooper is sure picking up in business,” he muttered and began picking over a huge pile of Wedgwood china wrappings, helping himself to a goodly supply. 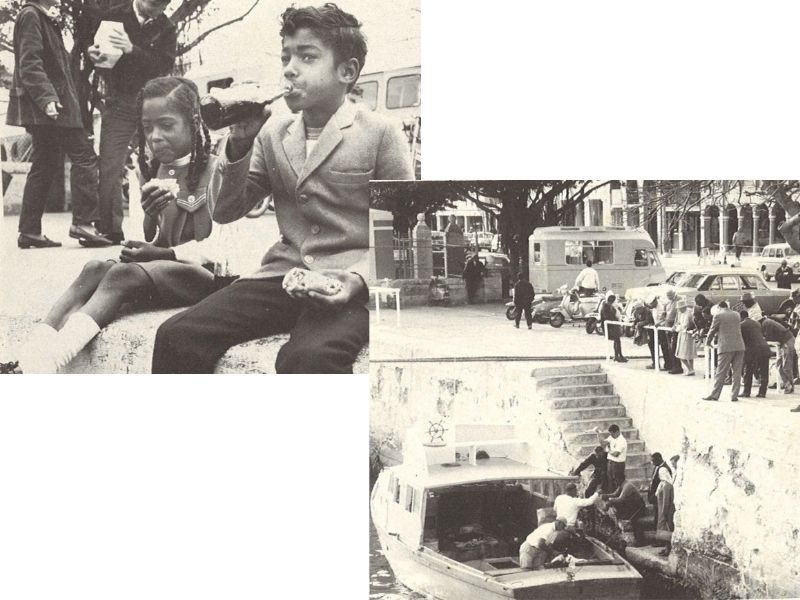 Leaving Grumbo to ply his trade, I moved along the docks, sat on a bollard and watched a rust-covered freighter unloading cargo. As indicated on her stern she was registered in Rotterdam. Moored ahead of her was a big tanker, and another freighter flying the flag of Liberia, and once more I was aware of the exotic aura that seems to cling to ships from distant places, now at rest at anchor in the harbour or lying alongside the docks. The fishing boats were beginning to arrive at the wharves to unload their catch. 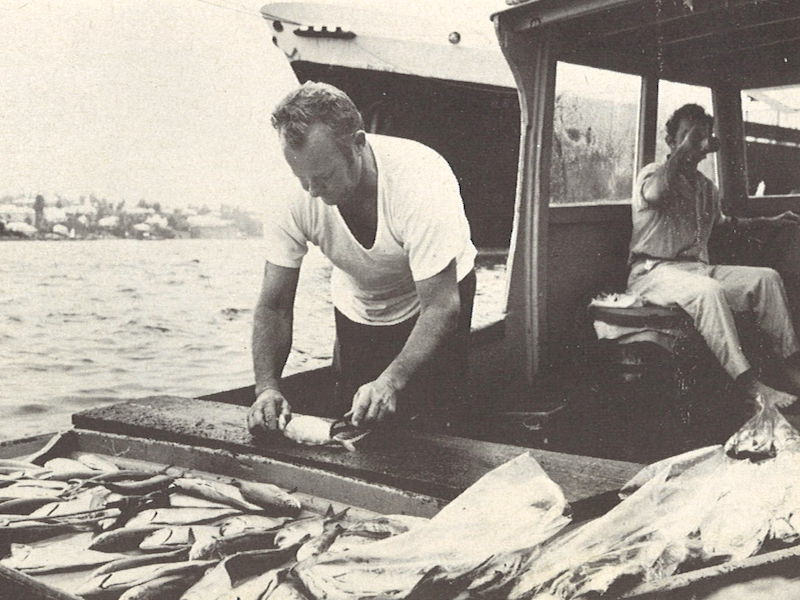 I reflected that for Bermuda, one of the most isolated islands on earth and more than 600 miles from the nearest land, the sea in one way or another had served as breadwinner for more than three centuries. Fishing had been the first of her industries and is still of considerable significance on the colony’s economy. The principal food of the 17th century settlers had been fish, potatoes, and a kind of gruel made of Indian corn and water. Later, the colonists turned to whaling, and at one period there were at least six whaling stations operating in the tiny colony. Probably the last of the old whalers was Tommy Fox, affectionately known as “uncrowned king of St. David’s Island” where he lived. Old Tommy, a patriarch among his St. David’s neighbours, had hunted whales long after the local industry as such was defunct. In 1940 a humpback whale was brought ashore here, and its captors stripped the carcass of its meat and oil. After it had lain in the broiling sun so long that it gave off a stench that made lesser men belch, Tommy Fox, then well over 70, prodded the whale’s exposed interior with nostalgic affection, remarking as he left, “I sure do hate to leave this nice smell”. Deeply religious, old Tommy once crawled down the throat of a captured sperm whale in order to confound sceptics who doubted the story of Jonah.

When profits from whaling began to dwindle early in the 18th century, the colonists built ocean-going ships and sailed them south to Turks Islands. There they raked the salt cays, trading the salt at mainland ports for flour and other necessities. In 1710 envious Spaniards captured Turks Islands and stole the salt piles, whereupon Bermuda dispatched an avenging expedition under Captain Lewis Middleton. The Bermudians routed the Spaniards at Turks, but for the next 40 years where subjected to intermittent raids.

Near the dockside Aruba Richards was putting the final touches to his meat pies which he sold from a mobile wagon. They sold well. Aruba inherited the lunch wagon business from his father 41 years ago. Aruba misses the old days when things seemed to run more smoothly and slowly. Now the motor traffic, cheeky youngsters, unrest, and fancy politics confused him, and he found it increasingly difficult to keep in step. Brooding over the more leisurely past, Aruba thought of the day in July 1928 when he had taken over the reins of the horse-drawn wagon from his father and, accompanied by his father’s faithful companion, old Jessie, had driven along white coral lanes to set up shop on the waterfront.

The city had presented a vastly different picture then. No cars or trucks, not even the short-lived railroad. Vessels tied up or at anchor in the harbour had included many a windjammer, with sails neatly furled, and longshoremen unloading cargoes of lumber from Jacksonville or salt codfish from Halifax. He could recall clearly the children scampering about the wharves chasing hoops or old bicycle wheels; the streets lined with horse-drawn carriages or drays, their drivers often dozing in the sunlight. Old Jessie would be the first to get her day organized. Wheezing with effort, she would lower her huge bulk to the pavement, and going to the back of the wagon, she would produce a chair, a small table and a big umbrella. Out of a large canvas bag she would pull jars of bread pudding, gallon stone bottles of home-made ginger beer, and an assortment of hand-made trinkets. These she would carefully arrange on the table, then settle herself comfortably into the chair and await the day’s business under the shade of the umbrella. 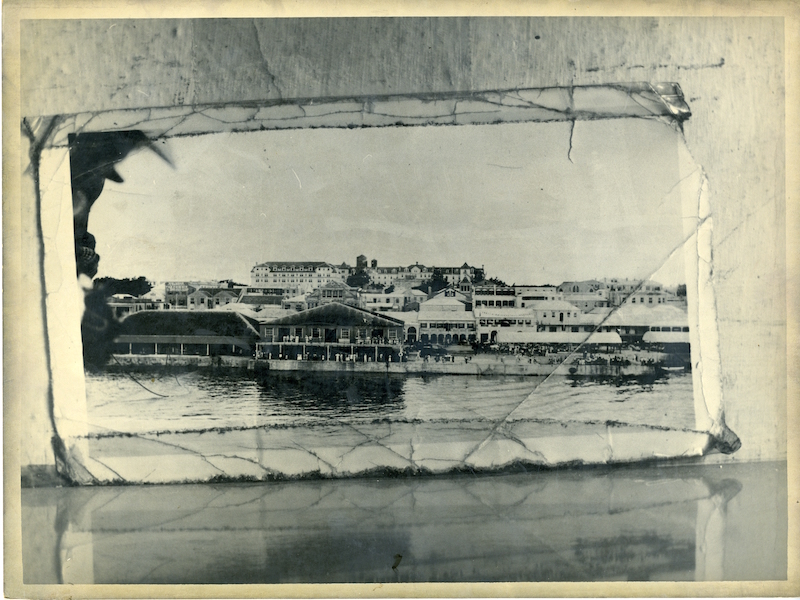 Aruba shook himself back to the present as a strong aroma warned him that his meat pies were about to burn. Jerking open the oven door he extracted the tray of smoking pies. A liberal sprinkling of flour effectively concealed the evidence of his neglect, and after he had laid out the various condiments to flavour his “wonder pies”, he called to his wife that he was ready for another day’s work.

A big cruise ship was entering the harbour and again I reflected upon how Bermuda always had been wedded to the sea. In the 18th century she had built many ocean-going vessels herself, usually small but swift copper-keeled sloops. A score of them operated as privateers during the American Revolution and, in the single month of September 1782, brought in 20 prizes. From one privateering foray in the Caribbean in 1799, Darrell Harvey, commanding a 120-ton sloop manned by 125 Bermudians, returned to Bermuda with 18 French prizes. Some of the more swashbuckling Bermudian shipmasters went in for overt piracy, like the colourful Nathaniel North, who later became rajah of a colony in Madagascar. When the advent of big, heavily-armed merchantmen made the odds too great for their little sloops, Bermudian seafarers returned to legitimate commerce.

Between 1853 and 1864, when all maritime nations were striving to produce vessels which would maintain the supremacy of sail over steam, Bermudians built their finest ships, five speedy and graceful clipper barques. The most famous was the Sir George Seymour, owned by the Watlington family, which made a record 13-day run from Bermuda to Cork, Ireland.

Then there was the American Civil War, when Bermuda harbours were crowded with blockade runners, and the Colony’s ships and men were available at a premium to the hard-pressed Confederacy. Captains earned as much as $5,000 for a round trip to Wilmington. There were always plenty of adventurers in Bermuda, openly in sympathy with the seceding states and intrepid enough to take their swift ships out with gunpowder and other supplies for the South, and run the gauntlet through the cordon of Federal cruisers that prowled the southern seaboard. Strong nerves and bold hearts were essential to such enterprise, but Bermudians through the ages seemed to count the sea as their natural element. Steamships finally finished ship building in the Colony and the Islanders turned their passion for the sea to boat racing, contributing to the yachting world the famed “Bermuda rig,” now in general use by all classes of racing yachts. 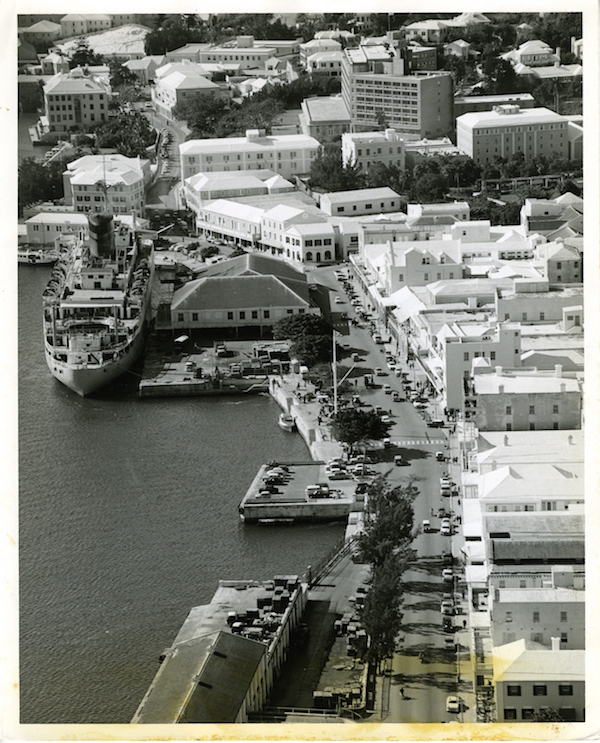 The cruise ship was now being warped alongside No. 1 Shed; a long line of taxicabs stretched down Front Street ready for passengers, and trucks were gathered at dockside waiting to transport incoming freight. There were even a few horse-drawn carriages awaiting fares. The cruise ship, huge and majestic, seemed to tower over the city. Passengers lined the rails of the promenade decks getting their first close look at the island’s capital, with its white roofs dazzling in the bright sunlight. Front Street was suddenly jumping with activity. Businessmen hurried their pace to keep appointments, glancing nervously at their watches, while an endless line of taxis and private cars filled the street, with all the drivers appearing to be intent on the same parking space.

Grumbo took it all in. He was not unhappy, having just a little while before found a crate of empty mineral water bottles behind his favourite pride-of-India tree. His pockets jungled musically with the deposits he had collected from a nearby liquor store.

Now, from my window overlooking Front Street, I can see Grumbo shuffling back to his favourite spot on the wharf. The fishing boats are still coming in and customers are thronging to look over the catches. Sailors on platforms and bosun’s chairs are touching up rust spots on the towering sides of the cruise ships. Big freighters further down the docks are unloading their crates of merchandise, with derricks swimming to and fro like the antennae of great insects. Aruba’s beef pies are selling at a furious rate, and I just noticed that Grumbo is having his picture taken by a tourist who, I’m sure, will find that it is not free of charge.

It is an ever-changing absorbing scene that carries an insidious invitation to indolence and bemusement.