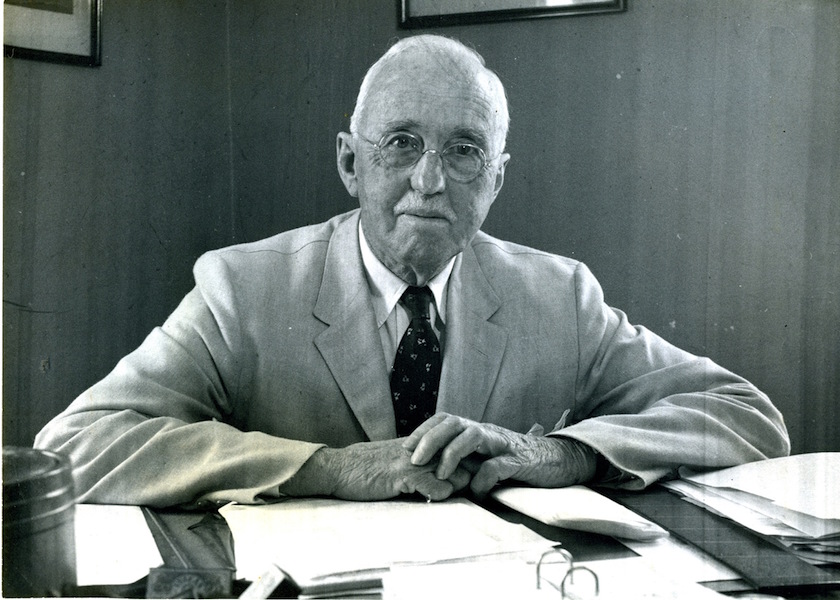 51 Years Ago: An Interview with Kenneth Fenton Trimingham

This article originally appeared in an April 1969 issue of The Bermudian under the title ‘A Man and His Trust’ by William S. Zuill

Trimingham Brothers is celebrating its 125th anniversary this year – which is somewhat surprising because the business is in fact 127 years old. For years Trimingham’s, the notable Hamilton store, has carried “Established 1844” in its advertising, but back in 1959 it was discovered that it was founded at least two years earlier. Tradition, however, dies hard, and Trimingham’s remains – 125 years old.

Whether 125 years old or 127 years old, the business is a leading Bermuda Institution, and the main store running from Front Street to Reid Street is a fascinating place. It’s a business where tradition means a lot. It’s run by descendants of the man who founded it – but it has not atrophied with time. Ten years after it was founded it was a leading Hamilton shop, and a leading Hamilton shop it has remained ever since. It is a place where dowagers shop with pleasure – but it is also a place where the most mod Bermuda women go for the latest fashions. And at the same time it retains that aura of luxury and service which makes it such a pleasant place to visit.

The man who has done much to see the store through its last 50 years, and whose influence still pervades the establishment, is Kenneth Fenton Trimingham who, at 83, still plays a vital role in the business.

“Mr Kenneth gives out vibrations,” an employee said recently. “There’s a subtle difference in the atmosphere when he’s in the store.” Mr Trimingham is a chairman of the board, and one gets the impression that much of the day to day work is left to others. Even so, he still works hard to maintain the quality and tone, the good taste at Trimingham’s, and takes his place on the floor to wait on customers, particularly in his favourite haunt, the men’s department.

In an interview for this article Mr Trimingham made three points which reflect his life and beliefs. The first: “I think one generation is only a trustee for the next generation.” The second: “You can’t work on a quantity basis with a quality product,” The third: “My mother and father gave me good taste. A thing well bought is half sold, my father used to say.”

Trimingham Brothers has made quality its watchword and the family has carefully brought on members of its younger generation who have shown a leaning towards merchandising. Nowadays, it would probably be fair to say, much of the running of the store and many of the forward-thinking ideas are coming from younger members of the family who have, however, been brought up in the traditions set by the founder, James Harvey Trimingham.

James Harvey, who this year is gracing Trimingham’s advertisements as “the original Mr T.”, started Trimingam’s after the family fortunes went down with the loss of much of the family fleet of sailing vessels in the late 1820’s. At the same time Bermuda entered a recession, and at the age of 13 James Harvey, whose father had died when he was nine years old, went to work as an apprentice to N.T. Butterfield. At that time Mr Butterfield did a little banking but was in the main a drygoods merchant. Young James learned well, and nine years later was in business himself, selling goods imported from London from the old family house, Waterville, at the Foot-of-the-Lane. The records show that the business prospered, and by 1879 James Harvey had taken his three sons into the business. Five years later he retired, and the business became Trimingham’s Brothers.

It was the sons of the third son, Thomas Darrell Trimingham, who later took on the firm – the late Eldon Harvey Trimingham, who was knighted, and Kenneth Fenton Trimingham, the subject of this article. Kenneth, the elder of the two, was born on February 13, 1886, at Inglewood, the great house which James Harvey built on the family property in Paget – it was the house which was occupied by Princess Louise, daughter of Queen Victoria, during a winter sojourn in Bermuda. Thomas Darrell and his wife, Emily Fenton (who came from Brooklyn) and their baby were there for about a year, and then moved to Waterville. From there they went to Yadow, on Pitt’s Bay Road, and then Thomas Darrell build a new house, Craigiemore, and the family settled down.

Kenneth attended Saltus Grammar School, and after that studied at the Massachusetts Institute of Technology where he took a course in yacht designing.

“I figured I wanted to become a naval architect specialising in yacht designing,” Mr Trimingham said, but this dream was knocked in the head by a noted yacht designer, William Gardner. Mr Gardner, a friend of Kenneth’s father, told the young man: “The only two naval architects making a living from yacht designing are myself and Nat Herreschoff. In my opinion, if you can get to like drygoods, then it will be a sight better for you to go home and enter the store.”

“I decided to come back,” Mr Trimingham said, “and I have been with the store ever since.”

That was in 1907, and the 23-year-old Kenneth started off in the men’s department, working his way up to buyer.

Later, when the time came for Mr Trimingham and his brother to run the business, Kenneth took over all the buying “from boots to bonnets” as well as the selling, while Eldon looked after the financial side. It was a partnership which prospered to the extent that an article in Town & Country magazine in 1959 declared: “Next to Brooks Brothers, Trimingham’s is probably the best-known haberdashery in the Western Hemisphere.”

The successful trusteeship of Trimingham’s was not K.F.T.’s only contribution to Bermuda. Although he never entered the House of Assembly, he worked for Government and served in the Legislative Council. “I was naturally interested in the tourist trade,” Mr Trimingham said. He became a member of the Trade Development Board in June, 1933, and chairman in January 1940. The thirties, up to the outbreak of war, was a period of big increases in Bermuda’s tourist trade as Furness, Withy developed the New York-Bermuda run with those splendid vessels, the Queen and Monarch of Bermuda, and saw their hotel business reach a high point.

Mr Trimingham’s biggest job was persuading the Holland-America Lines to run here after 1939, the outbreak of World War II, when the Furness ships were withdrawn. In this Bermuda was aided by Vincent Astor. One vital matter was persuading the Americans that no passport requirement should be made for people travelling to and returning from Bermuda. Mr Trimingham and Sir Howard Trott succeeded in this – only to be torpedoed from Bermuda by the then Governor, who insisted on the documents. The run, however, was put on, but was not particularly successful, and soon afterwards the United States itself was embroiled in war. 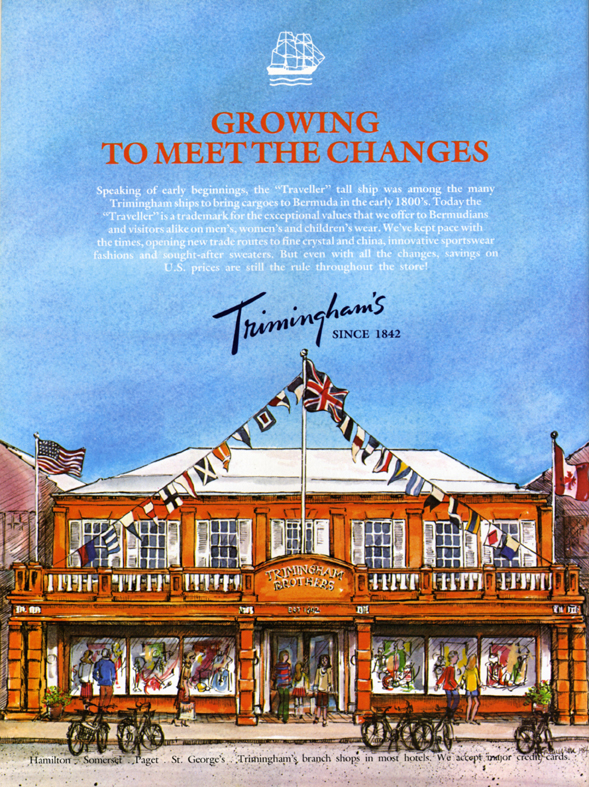 During the war Mr Trimingham retained the responsibility of trying to provide shipping for Bermuda, a vital and difficult problem.

Mr Trimingham was a member of the Legislative Council from 1936 to the mid 1940s. Elizabeth Taylor, writing about him in this magazine in July, 1942, said: “He prefers reason to rhetoric, but his contributions to date, though short, are convincing and carry great weight… his wide experience and judgement are much appreciated.”

Despite the difficulties which the sea brought them, it always had a lure for every generation of Triminghams. Mr Trimingham himself has owned boats, some of them superb racing craft, all of his life, but his last vessel – a punt – has now been turned over to the younger generation as an off-on vessel.

It has been sail all the way for Mr Trimingham. I asked him about motorboats. “We called them stinkpots,” he said with a malicious chuckle. Back in the 1920s Bermudians raced a variety of boats which race committees did their best to handicap. “It was very unsatisfactory,” Mr Trimingham said, “because a great deal depended on the strength of the wind. A small boat tended to bury when it was blowing, and suffered when racing against big boats. The reverse occurred in light winds. We decided the only thing to do was to have a one-design class.” Mr Trimingham has supported the one-design concept ever since.

The first one-design vessels came from Germany, and then came the era of the Bjarne Aas International One Designs from Norway. Up to that time Kenneth and Eldon had owned boats between them, but now they purchased one each to help develop the new class. After many years Eldon decided that racing took too much out of him and gave it up. Kenneth continued, and pioneered the 5.05-metre class, which were also designed by Bjarne Aas. His feeling was that these vessels, smaller than the International One Designs, would prove to be popular as the price of boats became more expensive. But in fact, Bermuda yachtsmen were turning their attention to ocean yachts and nothing came of Mr Trimingham’s efforts.

Back in the 1920s Mr Trimingham assisted in reviving the Newport-Bermuda race, building up the Bermuda finish line committee, which undertook to be on duty day and night to take the exact time of arrival of the yachts. He was part of the movement to revive the race, which had started before the First World War, but had been interrupted by the war. Mr Trimingham used his designing knowledge during World War II to develop a series of fast racing punts, which became the principal war-time racing machines here during the war. They were made locally, and Mr Trimingham still thinks of them as the best sort of boat for youngsters to learn to sail in.

The lure of the sea has held with the coming generation. Ocean-going yachts are owned by both Mr Trimingham’s sons, Kenneth Fenton Trimingham “(Jerry”) and DeForesy Wheeler Trimingham (“Shorty”). They are the children of his first marriage to the late Dorothy Birdsaye Wheeler. He recently married for a second time Agnes Griswold (nee Osborne) and they live at Fairwinds, Tucker’s Town, a house she inherited from her mother and father.

As Mr Trimingham surveys Bermuda today he worries. He fears the island is seeking to build up numbers of visitors without sufficient regards as to the kind of person we may be attracting. He fears, for instance, forces which would establish a gambling casino here. “We do not have enough area to seek numbers of people,” he said. It is not enough to rely on beaches and warmth to attract people, he feels. His view of Bermuda’s proper role: “I always did think Bermuda had been blessed by the good Lord with a quality which would appeal to the right kind of people, who wanted to come to a place which provided beauty and rest and recreation. We provided great charm for people who wanted a quiet sort of life. I think Bermuda’s key should be simplicity – well done,” Mr Trimingham said. His strong sense of duty to the future means that he continues to press for quality – and refuses to fall prey to old age. As he strides firmly through the store, or chats with a Government official, he remains an important part of Bermuda today.