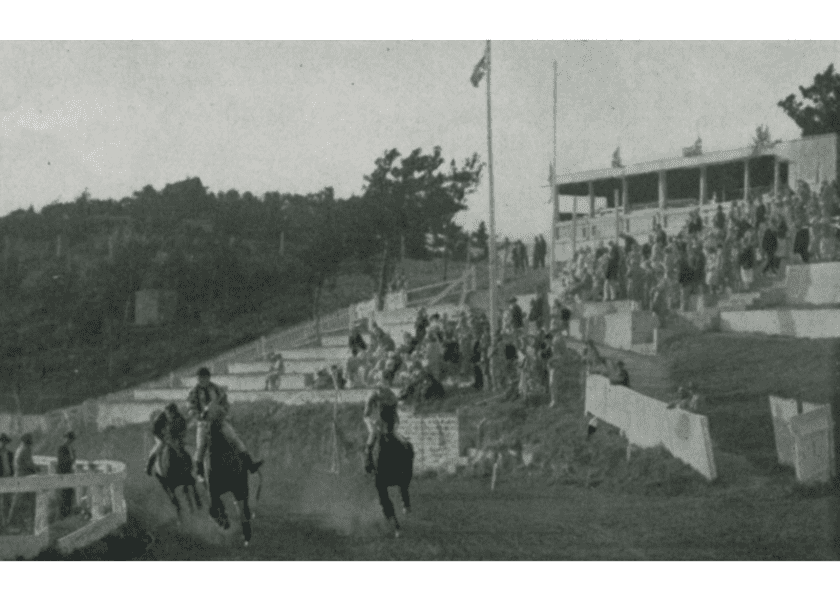 A Day at the Races

This article was taken from our archives. It originally appeared in the February 1948 issue of The Bermudian. It appears here exactly as it did in print originally.

If you’d like to produce a faster and funnier movie film comedy than the celebrated Marx brothers’ “A Day at the Races,” all you need do is take your camera out to Shelly Bay sometime when the Bermuda Jockey Club is staging a program of trotting and running races. If the sun is shining, you won’t require and special lights. And you won’t have to hire actors; the spectators in the “stands” and particularly the horses and their riders or drivers, will provide you with all the laughs you can possibly cover.

If you’re not too familiar with Bermuda’s winding roads your first problem will be finding Shelly Bay at all. No directional signs are posted anywhere. Even when you reach the site of the festivities, there is nothing to tell that “this is it” until you spy a crowd of people apparently seated on a bare hillside and peering intently down into the crater of an extinct volcano.

Accustomed to Stateside conditions, where alert householders near horse parks, football stadia, and other places of sporting entertainment beckon you to stable your car on their lawn, we looked for similar invitations. But, perhaps because it was the first day (Saturday, DeceAmber 26th, 1959) of Shelly Bay’s reopening, or perhaps because it was Boxing Day and the middle of a three-day Christmas holiday, the track’s neighbors were singularly oblivious to the opportunity of picking up a few year-end pounds.

Our second time around we observed a few cars slithering off the crowded roadway into a muddy declivity surrounded by rocky hills. We joined this skid-parade, and eventually came to rest on a steep slope where seemed likely that we might be able to leave our chariot in comparative safety, provided it did not decide to roll over on its side. We locked the car and clamored up the hill to the track.

Here, at a ticket booth toward which the Hon. B.C.C. Outerbridge, president of the Jockey Club, was training an appraising eye, we parted with ten bob (each) plus two shillings for an official program optimistically announcing “The King of Sports—The Sport of Kings” and bearing a cover portrait of an imposing Man o’ War, or thereabouts.

Writing in these pages back in January 1952, Mr. Cleon Throckmorton described the Shelly Bay track with amazed amusement. “Last year,” he said, “the entire array of horses would disappear behind a large hill covered with trees and bushes. The crowd would stop cheering while the jockeys behind the bump would, as far as any spectator could tell to the contrary, talk it over and decide among themselves which horse would be the winner. After a few moments, they would appear from behind the bushes and the crowd would start rooting again. This fascinating obstruction has since been removed and replaced by a fine a mangrove swamp.”

Mr. Throckmorton, incidentally, managed to get down a ten-shilling bet on Mouse Catcher (Jockey Pete Mello) which came in handsomely and paid off £1.3s. We had no such luck. The officers of the Bermuda Jockey Club, Ltd., well aware that gambling is evil, have thoughtfully arranged the betting windows at Shelly Bay in such a manner that it is virtually impossible to reach them. This is true not only of the apertures at which you purchase you tote tickets, but also at those which pay off. One gentleman who had somehow managed to push his way through the crowds and obtain a ticket which proved a winner, tore it up when the result was announced. “You won’t get me back in that mob for any amount of money,” he announced.

When we arrived, the Bermuda Hardwares Trophy, first heat, a one-mile, class A pace, was just concluding, with the Christmas Derby coming up. Unable to get within hailing distance of the betting windows, we contemplated organizing a horse pool of our own. But a stern note in the program hauled us up short: “Bookmaking or betting other than through pari-mutual system is strictly prohibited.” So we contended ourselves with “mental” bets—in which no funds are wagered, but only verbal preferences expressed.

“Spills, thrills, and chills” were the words used in a local newspaper to describe the day’s card, and for once a sports writer was not guilty of exaggeration. We missed the first spill, when a well-named nag, Stir-It-Up, headed for the stables during the second race of the morning and scraped his jockey, Ray Semos, off along the rail. Bruised and weary, Ray slumbered briefly as the other bangtails galloped over and around him, but was revived in time to finished out his day’s work.

For the Christmas Derby we rose to our tiptoes and sought a view of the starting gate, a weird contraption of parallel ropes strung across the track. Six horses danced mincingly out from their stalls and allowed their colorfully-silked jockeys to pilot them into position. The idea was to line all half-dozen beasts up with their noses against rope-barrier, which would then he raised out of the way by the starter, Harry Dunkley, Esq. Accordingly, one or two of them, instead of lining up for the start, lay back a bit and planned to come up running.

Run they did—and straight through the barrier. Most of the animals, no doubt seeking to protect the helmsman on their backs, took the ropes with their heads, necks, or chests. All but a smart critter named Orama (so smart that he won the race eventually) who ducked his noggin and allowed the ropes to remove his jockey, Shorty Churm, and dump him on his duff. A second attempt at a start, after riders and months had been sorted and re-assembled, ended in a similar mishmash and the complete demolition of Mr. Dunkely’s recalcitrant rigging. Undaunted, he produced a gigantic red flag as if by magic and sent the horses away with a single flourish. Orama took it easy for half the distance, probably to let Short’s head clear, and then came on to win easily in 1:42. But hardly anyone was looking; even if they could have seen the finish, there was still too much to argue over about the start. “it’s a shame!” one woman was orating to no one in particular. “Something always happens. Last time I was here the had to shoot two horses—right down at the turn!”

The Battle of Shelly Bay continued well into the New Year, as suggestions from fans continued to pour in—a new starting gate, automatic pari-mutual machines, a race-caller to report on the progress of each race, and a bell to sound at the start.

Personally it is my hope that the Jockey Club goes slow on too many improvements that might mar the present carnival atmosphere of the track. As a venerable Kentuckian once remarked to me at his state’s famous Derby: “You can beat a race, suh, but you cannot beat the races!”