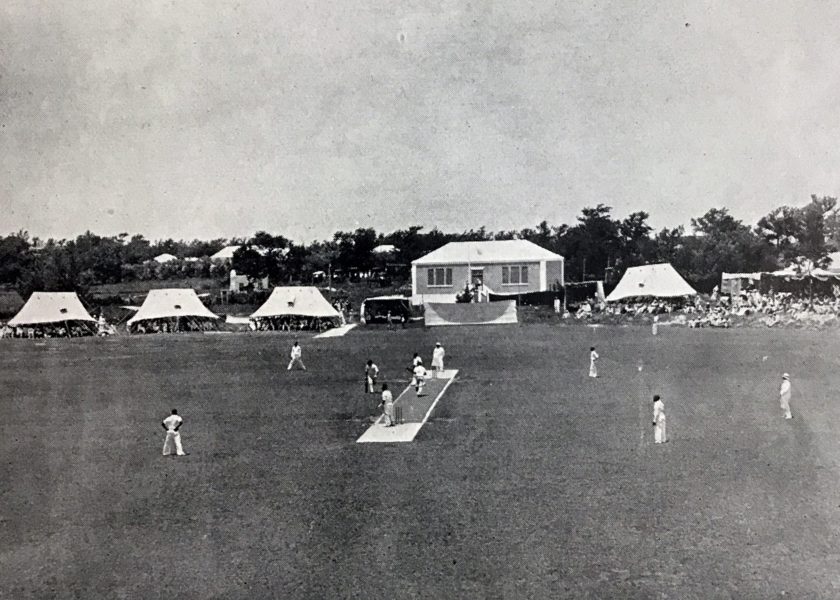 This article was taken from our archives. It first appeared in The Bermudian in September, 1932. It appears here exactly as it did originally.

Numbers of American visitors flocked to Somerset on Thursday, July 28th, to see their first cricket match. Most of them went anticipating a slow and boring spectacle, for cricket has that reputation in non-playing countries. Instead they were treated to something rare and many pronounced their preference for the game over their national game of baseball.

For the 32nd annual contest for the Challenge Cup between Somerset and St. Georges was marked by many exciting and spectacular plays, smashed records in scoring, and fielding that would have been a credit to any English County team.

Among the 3,000 to 5,000 spectators, His Excellency the Governor, a keen cricket fan, attended both days, and congratulated both teams on their prowess. A military band was present by the courtesy of Major Chenevix-Trench, and during those two excellent days it was impossible to secure a carriage for any other purposes except to go to the Cup Match.

Although the St. Georges team put up a dogged fight to regain the trophy, which Somerset captured from them last year, the West Enders were easily victorious. The Somerset batsmen were superior, their fielding was superlative, and their bowlers so vigorous and variable that at no time was the issue of the match seriously in doubt.

The Somerset hero was Alma Hunt, the most effective batsman and bowler on the team. On the first day he accumulated no less than 82 runs for his side, a score which broke the record for individual scoring in any former Cup Match in Bermuda. In 1905 Christopher (Pig’s Ear) Tucker achieved 80 runs in the Cup Match, a record unapproached until this year, for although the fielding and bowling of the cricketers on both teams shows exemplary form, their batting leaves much to be improved, probably through the absence of competent trainers here.

Not content with his laurels for piling up a record number of runs, Alma Hunt performed the “hat trick” on the second day of play which he bowled out three St. Georges men with three consecutive balls, an event which threw the Somerset crowd into wild transports of glee. At the end of the match His Excellency presented the Cup to the winning captain, Warren Simmons, veteran of may Cup Matches, and other prizes to the more brilliant players. Alma Hunt received no less than sixteen.

Somerset won the toss on the first day and elected to bat first. They stayed in until after the lunch interval, when Warren Simmons was caught out by the St. Georges captain, which dismissed the side for 185 runs.

St. Georges was still optimistic, but their wickets fell fast before the Somerset bowling and the excellent fielding of the West End team. Six men were sent back to the pavilion with only 31 runs scored for St. Georges. S. Darrell and E. Dowling formed a partnership which drove the score up to 70. All the St. Georges batsman were out for 110 runs. Somerset began its second innings and before stumps were drawn at 6pm, 73 runs had been scored for 3 wickets. Alma Hunt was greeted with cheers when he took his place at the wicket, and the Somerset crowd fully expected another exhibition of run-getting. They were disappointed, and Hunt was sent back for a scant four runs.

On the second day, with a lead of 148 runs, Somerset was confident of victory. The morale of the St. Georges team seemed to collapse during the morning and the West Enders piled up the score. Somerset’s second innings closed for 224 runs, with E. Simons scoring 43 not out.

With the superhuman task of scoring 300 runs in the second innings to win the match, the St. Georgians had the aspect of a beaten team. The Somerset fielding made runs almost impossible, and nine wickets had fallen before the 50 mark was reached. Hunt had performed his “hat-trick.” Finally Packwood was caught behind the wickets by E. Hunt off Alma Hunt, and the match was over, St. Georges having attained the feeble score of 60 runs. Somerset thus overwhelmed St. Georges by the huge margin of 239 runs, and the Cup remains at the West End.