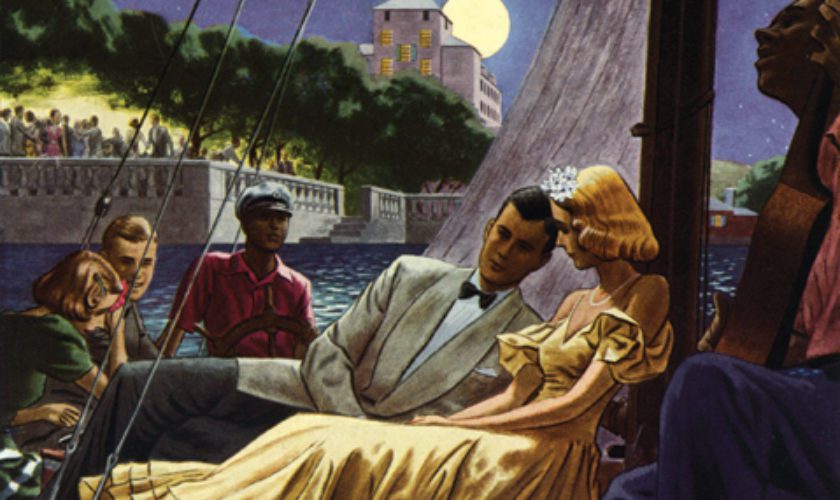 Books are like archaeological sites. They can tell us what life was like and enable us to compare and contrast our present with our past selves, country, environment, landscape and mindscape. They show us how others saw us and give insight into how much has changed—or stayed the same. Books on Bermuda were written by Bermudians, visitors, servicemen, clergy, convicts, missionaries and teachers. Each one is unique. After all, until recently books were the only means of transmitting knowledge and experience across the generations, so they also serve as time capsules showing the attitudes and thoughts of their authors.

“There can never have been a time when it was as good to be rich as in the late years of the last [nineteenth] century and the first decade of the present one,” wrote John Kenneth Galbraith in his 1974 book Money. He continues, “There was no income tax…there was the rewarding contrast with the vast majority which was still very poor. With sound instinct historians refer to these years as the gilded age.”

The novel Told by Two describes the unfolding of a romantic but illicit relationship in Bermuda between two visitors in this gilded age, 22-year-old first-time visitor Mrs. Robert (Polly) Pettingill of Gotham, New York, and veteran Bermudaphile Amory Burnham Jr. from Boston, who is some 10 years her senior and on his sixth visit. Pettingill and Burnham narrate alternative chapters throughout the book. Hence the title, Told by Two.

And what a pair of affected, supercilious, selfish, devious, opinionated, snobby, name-dropping, bitchy, high-maintenance, unrepentant and conspicuous consumers they are. As a result, they open for the modern reader a cultural time capsule of contemporary attitudes and manners prevalent among the crème de la crème of the social strata that made up Bermuda’s visitors during the time just before mass tourism started.

The opening chapter introduces us to a slightly seasick Polly aboard the SS Trinidad of the Quebec Steamship Company, expounding her views on life and living and quoting:

Permit me not to toe the mark;
Be ever prim and true,
But rather let me do the things
That I ought not to do.

Clearly, she is a bit of a rebel and up for adventure. She dismisses her fellow passengers as “just a lot of ‘jays’” (presumably because these birds are common, colourful, noisy and arrive in large numbers). The male passengers do not escape her attention either: “There’s no excuse for a man wearing a collar so big that the entire contour of his Adam’s Apple is on show.” She herself is wearing a chinchilla jacket that “makes every other coat here look like thirty cents.” Husband Bob bought it for her last year in Marienbad, the most exclusive and snobby Austrian resort of the time. In her jacket she carries her lap dog, a King Charles spaniel variant (called a Blenheim), Mikowitz or Miko for short, who pokes his snout out from an aperture in the coat. She addresses him in the following fashion: “There, my treasure! Art thou not, now, the most comfortable of doggies? Are there many little bow-wows, do you think, who are cradled in chinchilla?”

Why is Polly visiting Bermuda with dog and a sole maid, Josephine? For a complete rest and to escape her husband, Bob, who sounds a bit like the billionaire banker J. Pierpont Morgan: “His face is very narrow and very red and he has a long nose and beady eyes.” Like Morgan, he is something in the city and presumably hugely wealthy. Polly’s nerves are in tatters because Bob is trying to make her accountable for her expenditure:

If there’s anything in this world I detest, it’s a great big man with a pocket full of money…going over milliners’ and dressmakers’ and dry goods bills. It’s a perfectly ridiculous sight! Why was this hat fifty dollars; and why can’t Moschcowitz make a gown under two hundred? What’s the good of Bob earning so much money, anyway, if I don’t spend it?

She notices Burnham on board the steamer when he looks amusedly at her dog. In contrast to her husband, Burnham, although wealthy, is insouciant, fashionable, witty and just as bitchy as Polly. But he is generous. For example, he showers Polly with presents, such as cigarettes by Nestor from Boston. They were the most expensive in the world, being tipped with pure gold leaf and costing $22 a pack in 2010 money.

He is definitely a child of the time, rich, spoiled, world-weary and devious in a manner reminiscent of Oscar Wilde’s characters. He has joined two clubs, he tells us, one for meeting his own class, the other for putting up friends who don’t quite make the cut. Later in the book, a telegram from a friend gives him pause for thought: “This day I have married Miss Maitland. She is rich, fat, innocent and stupid; therefore, I am a happy man.”

Inevitably, Polly and Burnham connect, and the book’s action focuses on whether she will elope with him or not. However, for today’s Bermudian reader the plot, such as it is, is of far less interest than the depiction of Bermuda in 1900. We learn from them that the big hotels, such as the Princess and the Hamilton, charge $21 to $28 a week and that one can have a pleasant fortnight’s holiday for under $100. Polly’s exclamation “No wonder Bermuda is over-run with excursionists!” gives us a glimpse of Bermuda’s blossoming tourism industry.

As they get to know each other, they explore Devil’s Hole—one of Bermuda’s first tourist attractions—Walsingham Caves, St. George’s and Dockyard. They sail in Hamilton Harbour, shop (at the Tower and at Childs’ jewellery shop, where Julia C. Dorr had been 15 years earlier) and have tea with the governor’s wife, Lady Digby Barker (who did indeed exist). Through their charming and sometimes amusing observations, Bermuda provides a shimmering backdrop to the novel.
“Somerset is not famous in any way, that I have heard of, but is said to be very picturesque,” Polly comments. “I believe it is a retreat for invalids who find life at Hamilton too gay, Somerset being unmistakably pastoral….”
And: “At St. George’s…they buried the heart of Admiral Sir George Somers, Kt…they hacked out his heart and buried it here. I don’t think it was very polite of them, do you?”
Whole chapters are devoted to the island’s history and geography. There is even a moonlit buggy ride, surely the first time this features as part of the Bermudian tourist experience. Burnham describes the route between Hamilton and Flatts: “The little cottages along the way gleamed like marble in the silvery moonlight and I think there were fairies holding revel in the lily fields…I held Polly’s hand tight in mine, and we said but little, drinking in the beauty of the night.”

In addition, we see how their view of their fellow guests contrasts with their opinion of Bermudians. “She is a celebrity,” Polly writes of a guest staying in the Hamilton Hotel. “She writes poems…after Burns—considerably after! …Mrs. Carroll is an elderly dame, of fabulous wealth, and carries her millions in her stomach, if one may judge from her shape! She has a mouth like a cuttlefish and a voice like a trombone.… Burnham says that he is not an admirer of Mr. Bryce, who would hardly pass muster on the American Kennel Club register! That sounds almost derogatory, doesn’t it?”

However, neither character is sarcastic about Bermudian hospitality. “…the natives salute you on the street as though you were old-time friends,” says Polly. “…little children throw nosegays of scarlet heath, lilies and pomegranate flowers into the carriage as you pass…. Everywhere the greatest cordiality is shown by Bermudians to the strangers within their gates.” Through descriptions such as these, we glimpse a Bermuda busy laying the foundations of what was to become its seventy-year success with tourism.

About the Author
Marie St. Felix was the pseudonym of New Yorker Harriet Louise Husted (1865–1943). By 1900, she had published at least four romantic novels, and in 1901 she married Dublin-born Jerome Morley Lynch (1870–1951), MD, FACS, who later became president of the American Proctologic Society and wrote a number of publications on the subject. There are occasional and tantalising glimpses of Harriet in contemporary newspapers. For example, in 1895 the following appeared in the New York Times of July 20: “An exciting incident of the week was the arrival of Mrs. Marie St. Felix, the well-known writer, who reached Fire Island after a narrow escape from being carried out to sea in a small boat…with a gentleman friend.… It was 11 o’clock at night when the two excursionists placed foot on land again and they lost no time hurrying to the Surf Hotel….”
Given the accuracy and authenticity of her Bermuda descriptions, it is very likely she visited the island some time in 1901. After marrying Jerome, she disappears from view, though we know they lived at 205 East 61st Street in New York City. Her books are still available on the secondhand market.