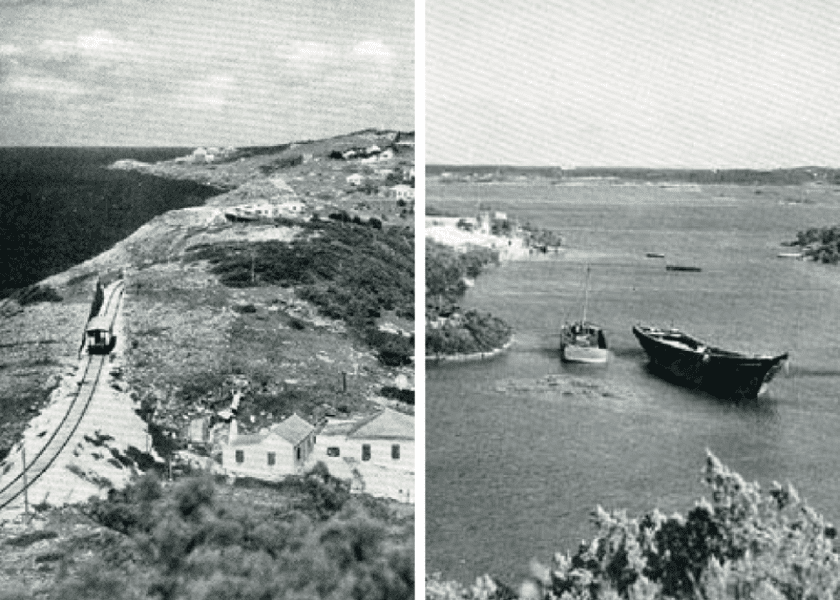 This article was taken from our archives. It originally appeared in the September 1933 issue of The Bermudian. It appears here exactly as it did originally.

Miss Scoville, who recently was graduated from Vassar College, wanted to see Bermuda. She had heard that the colony, being one of the fashionable resorts of the world, was also impossibly expensive; whereupon she assayed to prove that, even with little money, you can go almost anywhere and have a magnificent time provided you have initiative and enough of the adventuring spirit in you to ignore the crowd and do the things of your own choice in your own fashion. This is her account of her fifteen-dollars-for-five-days’ vacation in Bermuda in company of her classmate, Miss Alice Dodge.

It was June that Dodgie and I took our holiday in Bermuda. We determined to have our trip, excluding the passage down and back, for fifteen dollars. You can imagine the warnings and opposition this evoked. Up to the very last minute, kind friends and family telegraphed us extra money for emergency. We finally had enough to pay the bills of doctors and hospitals in case of a sudden attack of appendicitis. However, we left these riches in New York and struck out to see Bermuda in our original poverty-stricken condition.

Our luggage consisted of one suitcase apiece filled with our best clothes for the edification of that smart liner, Queen of Bermuda, and one small carry-all each, containing ragamuffin clothes for roughing it in Bermuda—not that I had ever heard of anybody roughing it there, but on fifteen dollars I did not see how we could help it. Each carry-all had an extra tennis dress, an extra set of underwear, a comb and a toothbrush, two pairs of socks and a bathing suit.

We stepped off the Queen among the smartly trousseau-ed honeymoon ladies (actually forty of them!) and in our cotton tennis dresses we felt a little de trop. In fact, one grim official tried to hector me out of the Customs shed, insisting it was for passengers only.

We checked our suitcases and immediately started off with our tiny carry-alls and fifteen dollars apiece to look for beauty and adventure. We hoped to discover parts of Bermuda which the average tourist and vacationist rarely or never saw.

We hired fine new Hudson bicycles from Astwood’s, pleading with maidenly wistfulness until we got them at a pound for five days. Then we hurried off, seeking a place to lay our heads at night, for our valiant proposal to sleep our on quiet little beaches under the stars was so frowned upon that we regretfully abandoned it, wondering vaguely how we would pay for room and board out of our meager allowance. Still, it is impossible to worry over anything in such a fairyland. We’d manage somehow—and we thought of nicer things.

Very soon we were established in a private house in Paget, overlooking Hamilton Harbour. For two dollars a day per person we had room and three meals, one of them made up into a picnic lunch. We would have been well content to sleep in an attic or even on a doorstep, but we found ourselves in a suite of three rooms with a bath, a most unexpected luxuriance that made me feel cheated out of my hardships.

Right after lunch we bicycled for miles along the white coral roads, through avenues of crimson hibiscus and pink oleanders, sights familiar enough to us in print and picture but now full of glamour to our eager eyes. We chose a quiet turquoise cove on the North Shore for our first swim and marveled at its pale peach sand. Not till later did we find we had been enjoying the Admiral’s own private beach.

On Sunday, on our way to Somerset, we rested beneath a hibiscus hedge and listened to an out-door Negro revival meeting, and the voices were rich, powerful and beautiful. A light-skinned West Indian girl who swaggered by in a magenta dress and long sinful earrings was followed by reproachful and deprecatory stares.

Then we cycled miles in a gentle downpour, which seemed not so much rain as a divine beneficence, for the sun shone throughout, and a rainbow somehow more vivid than any rainbow I had ever seen before, curved from Wreck Hill to the North Rock. In sleepy Sandys Parish at the west end of the islands I ran into a girl I knew. We were at Shipley School together. She was married, had a baby, a Scottish terrier and a roguish looking Sealyham—and, of course, a husband. The latter, on discovering what we were doing, grew enthusiastic and tried to plan excursions for us. I listened to him politely, but privately decided to do things my own way. He mixed us a Trinidad rum cocktail, made us take off our wet clothes and put on some of his wife’s while we had our lunch. They insisted on that. After the cocktail, which was awfully good, but awfully strong, we had German beer with our lunch.

They wanted us to go sailing then, and we were sorely tempted—the rum and the beer had made us so deliciously drowsy. Still, I had a mission and only a few more days left in which to accomplish it.

We set off to Ireland Island and the naval dockyard—an anachronism, somehow, that just doesn’t belong, and is in consequence intriguing. The inhabitants of Ireland Island are not Bermudians but English who are occupied with the business of the naval dockyard. There are houses in little streets, drab and without beauty. The speech of the people there is cockney, with a sprinkling of Portsmouth, Liverpool and other dockyard ports of England. Still, it served an admirable purpose for me, for it threw into bold relief the incredible beauty of the rest of the islands.

Next day we made for St. George’s at the east end. On the way we passed an occasional victoria or surrey (the horses wore straw sun-bonnets) filled with tourists, looking languid and cool. We didn’t envy them a bit, but perspired happily climbing the hills, pushing our bikes, and coasted swiftly down the other side, grateful for the salt wind whipping our faces.

St. George’s is like a village out of another century, peaceful, clean and indolent, as if unconcerned with human ambitions and unimpressed with the rapid tempo of the 1930’s.

We wandered into the ruins of an ancient church, desolate and deserted but for a pugnacious billy-goat that tried to butt us. Then we made friends with a native who used to drive the horse-bus between the old town and Hamilton. He showed us about a cemetery which smelled of the pungent church-yard geranium, found only among gravestones. The burial place, he explained, was full of victims of the yellow fever, which swept the islands a century or more ago. A crested cardinal alighted on one of the graves, and he pointed to it and said: “They stopped the epidemic. Since the red-birds came to the island there’s been no more yellow fever.”

St. David’s Island, just off St. George’s, is utterly fascinating. Some of the inhabitants have never set foot on the main island, just a fraction of a mile across the harbour. One legend has it that an old lady of eighty years once resolved to see the great world across the bay before she died; she made her will in case anything should befall her during her adventure, and then crossed to the city of St. George’s.

On St. David’s we met Mr. H. M. Fox, tall and gaunt, who is known as His Majesty Fox or the King of St. David’s. He is seventy-seven years old and walks the thirteen miles into Hamilton and back frequently. We all sat under the cedars and talked with an old man, who had white woolly hair beneath his peaked green felt hat. This old man was named Minus, because his great-grandfather had complained that his parents had left him minus a name! We discussed the Scotsboro case, the new bridge to the mainland, which, by the way, recently collapsed before it was completed, and ended with an interesting case-history of Minus’ grandmother. She died at the age of one hundred and five from a ruptured blood vessel, burst by shouting too lustily.

Mr. Fox talked about his whaling days, stories filled with romance and adventure, hardships, defeats and triumphs. Today, he is more interested in the St. David’s Social Club. This is where the islanders gather in the evenings to play cards or listen to the radio. It is a temperance club. Mr. Fox, who founded it, has never taken a drop in his life, he “wouldn’t drink with the King.” The club has cricket matches also, between the married and single men.

Another day we visited a little school taught by Miss Janie Frith, aged ninety. She began teaching when she was sixteen and is now teaching the great-grandchildren of her first pupils. They are devoted to the little old lady who teaches them sums on slates and hears them recite from “Useful Knowledge.”

A friendly Bermudian loaned us a motorboat in which we explored the smaller islands, the tiny bays and reaches almost inaccessible from the shore. That day we ate our lunch across from “Skeeter’s” Island, the burial place of the only two murderers in the history of Bermuda.

On our last morning we took a last cycle ride to Devonshire Fort, near Hungry Bay, and sat near the sea, wishing our five days could be five months. Our ship sailed at three p.m.

The impression I shall always keep of the incomparable islands is one of colourfulness. Why—the birds and even the fishes seem to be competing with the flowers and the sea and sky for perfection in heavenly colour combinations. The bougainvillea, the cardinal, and the red snapper; the morning glory, the bluebird, and that dream of grace, the angel fish. Never do I hope to see such blues as in the shallow reaches with in the reef border. There, when the sky is grey (as it is sometimes, even in Bermuda) the sea is still some rich shade, not just one sheet of pure colour either, but a series of dark, pale and paler greens and blues and purples, and where a sand bar comes near the surface, yellow and old gold.

Oh, dear, the editor must read so much of this sort of thing from so many people who want to write their “impressions.” Anyway, Bermuda is a colony in which there is no squalor, no obtrusive signs of poverty, and no vulgar indications of great wealth. The colony has an air of graciousness, of aristocratic restraint, self-assurance and dignity. In brief, it is unique, and I loved it.

The next day we sailed for New York. We went in triumph aboard the Queen, in triumph because the sum total of our expenses, including our bicycles, board and lodging, a bottle of claret and ferry fares totaled fourteen dollars and eighty-five cents each. Proudly we discussed our holiday with the honeymoon couples, and proudly we flaunted the cost of our trip. They paid ten dollars a day. All they could tell us about was bathing at the beach.

Still, I suppose, they did have their honeymoon.