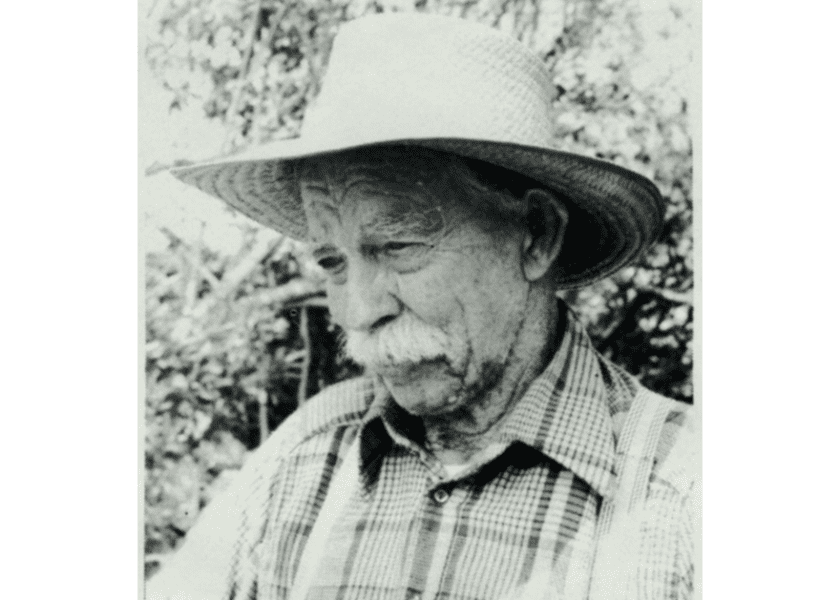 If you’ve never heard the tales of Fredrick “Gunny” Wade, you’re in for a treat! John Barritt recounts the legendary life of an true Bermudian man; one who captured a whale, fought with a 170lbs turtle and got married at age 70! Those were the good ol’ days!

This is a tale about an 86-year-old flamboyant, forgotten independent of yesteryear.

His name is Frederick Gunnison Astwood—“Gunny” most people call him. He used to spend as much time as a he could out at sea fishing. It was fun and it was a living. He remembers how he used to get up before dawn.

“Bait was hard to get after the sun came up. We would haul in lots of pilchers in the dark. Now though, you don’t see any around like you used to.”

The bait was for pots he and his crew laid on the ocean floor about ten miles southwest of Bermuda. If the weather was good they’d go out every day in Gunny’s cedar fishing boat. They would haul the pots up, empty them of fish, bait them again and wait another couple of hours, then haul them up once more. Gunny had to catch at least 600 lbs of fish each week. He had a contract with two hotels—300 lbs every Tuesday and 300 lbs every Friday. An able fisherman, he always had some to spare.

“Whenever we had anything left over we’d sell it on the roads. Back then, years ago, there used to be fellows with wagons who would go along the roads selling fish, and they’d tell people by blowing a conch shell. You blow a conch, you know, and you can hear it miles away. They can make some noise.”

But that part of the past he remembers best, that part he enjoys talking about, is the he harpooned a 50-ton whale. It is the proudest moment in his life.

“I’d been following whales since I was 18-years-old. I used to join hem every year out there. People would see them off the South Shore and everyone wanted to catch on, and I thought I’d catch one.”

Success only came after 32 years of trying. A 50-year-old Gunny Astwood got lucky just when he was about to give up. It was the spring of 1940, early April. It was seven o’clock in the morning after he and a crew of five had spent the night out at sea in two boats about 20 miles off Bermuda. In the distance they saw what they thought were buoys that had broken loose.

“It was two whales making love,” chuckled Gunny. “They looked like two buoys though, standing up in the water together like that.”

But when he got within 100 yards of the whales, they separated. Gunny took a shot at one with his Norwegian whaling gun. He missed it would have been only his seventh strike in 32 years.

He got his next chance minutes later. There was another whale coming up fast behind the one he missed. An excited Gunny Astwood reloaded, fired and suddenly realized his dream had a chance of coming true. The whale dove deep and ran for five hours with 200 fathoms of rope. And at three o’clock when he surfaced Gunny Astwood was there, poised to deliver the fatal blow. It was a lance with explosives in the bard. The whale died two hours later.

“I remember clearly that he died at five. One of my men had a watch on and we timed everything that day.”

But there was an even bigger thrill awaiting Gunny the next day—the day he would triumphantly tow his prize catch into Hamilton Harbour for everyone to see. He was going to bring it to Darrell’s Slip (Darrell’s Wharf today) where he planned to show off his whale for at least 24 hours. It was the thing to do in those days. And besides you could charge people a shilling to the see the whale and have their picture taken standing in front of Gunny Astwood’s catch.

“Seems to me that there were a lot of people who didn’t pay their shilling,” he remembers with a smile. He and his crew only got to divide up about $600.

He remembers too, the exact size of the his whale. It was a 43-foot long humpback and the flukes on this tail measured 16 feet from tip to tip. Fins on either side of the body were about 12 feet in length and he was about 37 feet in circumference.

“We got about eight 50-gallon barrels of oil out of that whale plus enough meat to supply every man, woman and child in the island with a couple of pounds.”

But Gunny was never in it for the money. He was in it for the thrill to be able to say, “I caught a whale.” Daredevil that he was, he caught lots of other things for the sheer adventure of it. Like two monster manta rays, one of which measured 14 feet, 6 inches from wing tip to wing tip.

“You had to be careful when you fooled around with them. They called them devil fish because they are the only fish that will turn on you after you strike them. And you have to use wire on the harpoon because they have sharp fins that will cut rope easy.” Gunny made a little money putting them on show too. He brought them into Hamilton where people could be photographed in front of his catches a shilling.

Then there was the time he hooked a 170-lb turtle on a hook and line.

“It was out in deep water. They told me that he was a hawksbill and very big for his type. He weighed around 170 lbs I guess. I gave him to the Aquarium to keep for show.”

Or what about the time during the war he was fired on by US soldiers while he was battling a 40-lb rockfish Gunny Astwood wasn’t about to give up?

It was on the South Shore about half a mile from shore. I nearly got hit by a machine gun. There were about five bullets and one went right by my shoulder. I heard the hiss. Another struck the water about ten feet in front of my boat and bounced over the bow. I reported that to one of the police and stopped going down on the South Shore…they were shooting at me for sport I think.” His wife Pamela explains that where Gunny was, was off limits to fisherman during the war. The US military had guns down there. True independent that he is, Gunny had to find out the hard way.

Even today there is a kind of reckless determination about Gunny Astwood that keeps him going and happy. Although he no longer gets up around dawn—it’s more like eight now—he prefers to spend his days outdoors, gardening.

“Oh I poke around the property you know. Look after my banana trees. I got a bout a thousand and keep them trimmed and all that.” He also has a vegetable garden, which produces all the beets, carrots and tomatoes, the Astwoods need.

The live in Sea Song off Warwick Lane, Warwick, on property the Astwood family have owned for donkey’s years. Mr. Astwood can be found out in the garden at some point during the day, every day if the weather is good. He hasn’t been sick in years and only had three operations in life.

“Gunny doesn’t smoke, doesn’t drink, and gets plenty of fresh air, hates being in, in fact,” says a friend of the family, Miss Dorothy Ledward.

“I don’t know what the secret is,” says Gunny. “Just always have something to do keep, keep the blood circulating you know.” He gets to bed each night around eight or nine after he’s seen the news on TV—which incidentally, he watches without glasses.

“Never needed ‘em, though my sight’s not as good as it used to be you know. Getting foggy now.”

A real wit this Gunny Astwood.

He got married when he was 70 years old.

“Well you do have changes of mind sometime you know.”
Betcha it was dangerous chasing whales like you did?
“Dangerous? It’s always dangerous just to be alive, especially with what’s going on in the world these days.”
Guess Bermuda’s just not as beautiful as it was in your day with all these houses and motor cars?
“You can think what you like about Bermuda today, but you can’t do much about it.”
Miss them good old days huh?
“You can call them the good old days if you like but you had to work hard then same as you got to now.”
That’s Gunny Astwood for you.