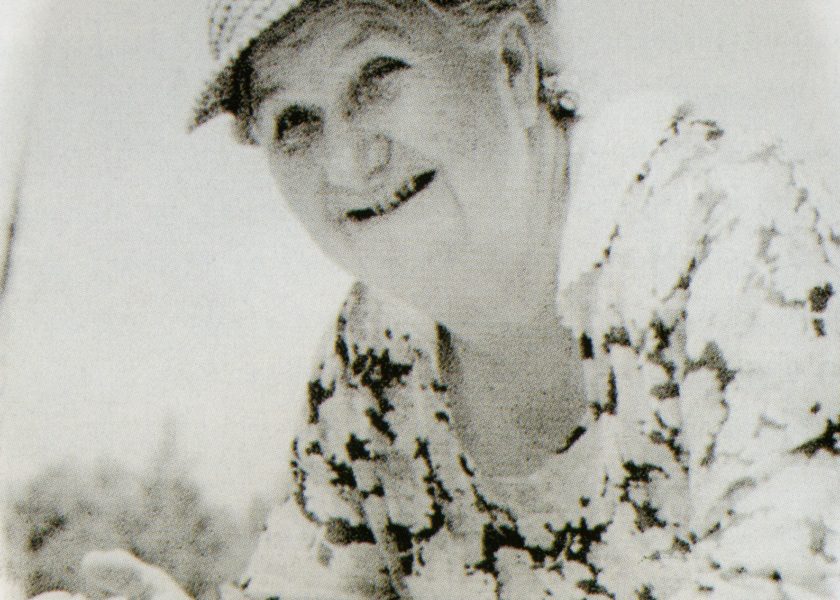 A Woman of Independent Means

This article was taken from our archives. It first appeared in the November 2003  issue of The Bermudian. It appears here exactly as it did originally.

Long before there was a Princess in Southampton, there was a Queen. Claudia Darrell would have likely scoffed at such a title, but her rule as owner and convivial hostess of her domain, the Waterlot Inn, was legendary.

The hill that tumbles down to the inn, nestled in Jews Bay below Gibb’s Hill lighthouse, was known to generations of Bermudians as “Claudia Darrell’s hill.” Her death in 1949 at the same inn where she had been born 75 years earlier, on September 27, 1874, warranted front-page news in The Royal Gazette and the flags in Hamilton flew at half-mast. Her passing marked the end of an era; with the advent of the motorcar and mass tourism, Bermuda and the Waterlot, once a stopover for horses and carriages making their way to and from the West End, changed forever.

A resourceful and fiercely independent woman at a time when being so was considered both unfashionable and unladylike, Claudia Darrell was a larger-than-life character who was handier than most men. An accomplished cabinetmaker, boatbuilder, farmer, cook and accountant with an expert eye for Bermudian antiques, she could tackle most anything if the need arose, including whitewashing the roof or ploughing a nearby field. During the Second World War, when manpower was short, she took to her pony and cart and hand delivered the mail herself.

Although she yearned to be a doctor and was the first woman in Bermuda to administer gas as an anaesthetic, she became postmistress, parish registrar and mother confessor rolled into one. A grande dame who supped with the likes of Waterlot guests Mark Twain, James Thurber, Eleanor Roosevelt and Eugene O’Neill, she nevertheless maintained a common touch, holding charity bazaars and dispensing food and clothing to the needy.

“She was a nice, kindhearted lady and very kind to poor people,” recalls Ann Santucci, 81, who started working for Claudia after school and stayed at the Waterlot as a waitress for 50 years. “She was always giving somebody something. If people needed stuff, she’d just give it to them. She was very comical-always smoking-but strict and very hardworking. She taught me a lot.”

Laura Prichard, a server at the modern Waterlot, has been fascinated by Claudia’s legend since she arrived in Bermuda from Canada earlier this year and has been researching Claudia’s story. “I think what fascinates me about her is that she was a woman before her time in doing what she wanted,” she said. “She either simply did things herself or got someone to do it. She was vey much a woman of strength, both mentally and physically.”

Claudia created a stir in the 1890s when, disgruntled at having to walk six miles into Hamilton each morning to work in H.A. &E. Smith and later Lockwood’s department stores, she became the second woman in Bermuda to own and ride a bicycle.

Legend has it that when the Pollockshields ran aground off Elbow Beach in a 1916 hurricane and efforts to get lifelines to the stricken vessel repeatedly failed, it was Claudia who came to the rescue. She dragged all the able-bodied men out of the pubs in Southampton and persuaded them to haul a whaling boat over the island’s hilly spine to South Shore, marching alongside them with coffee and sandwiches.

“The men,” wrote Edith Lightbourn in a celebrated article in a 1941 issue of The Bermudian, “feared Claudia more than a rough sea, and under her inspiration they proceeded to rescue the threatened sailors.” The captain was swept overboard, but 33 sailors and three kittens were saved.

Claudia opened her tearoom at Waterlot soon after the First World War in the picturesque Darrell ancestral home, which dates back to 1670. How Claudia, the eldest daughter of Captain James Thomas Darrell, came to inherit Waterlot is not as clear. It was customary for a son to inherit property, but her Gazette obituary of 1949 notes that in addition to her sisters, Sally and Etta, both married and living in New York, Claudia and been predeceased by a bother, B. Darrell, in 1929.

She inherited the job of postmistress for Southampton East from her father, whose ancestors included James Perot, Bermuda’s first postmaster and issuer of the famous prized Perot stamps. Indeed, the Darrells, who according to Bermuda folklore were variously rich, poor or crazy, could trace their Bermudian heritage to 1648, when John Darrell came to the island and laid claim to a swath of land that stretched across the parish from North Shore to South Shore.

In fact, reports family genealogist Owen Darrell, a fourth cousin of Claudia’s, the Darrells can trace their roots to William d’Arel, a French nobleman who accompanied William the Conqueror on the Norman Conquest of 1066 and became Sir William Darrell of Brodsworth for his part in the fall of York in 1069.

Waterlot-literally the “water lot” of land-is a fine example of old Bermudian architecture and has been likened to the fictional Dingley Dell from Dickens’s “Pickwick Papers.” Writing in the late 1940s, Lightbourn described the Waterlot as having “all the features of the Bermudian tradition, with its bold chimneys, buttresses, tray ceilings, water tanks with sloping tops, and the various out-houses that once served as slave quarters, kitchens and butteries. … The floors throughout are of broad cedar planks which betray little of their great age. The walls are tinted a pleasing pink below the white washed rooftops. On a calm day, looking towards the Waterlot Inn from across the little bay, the place is so vividly mirrored that you might think it had tumbled overboard, upside down and intact.”

It was here that Claudia Darrell served tea and her famous lobster lunches-she later added a bar-greeting friend and newcomer alike with a hearty “How the hell are you?” or a welcoming “Come in and make yourself comfortable.”

Noted Lightbourn: “She runs the establishment much in the same manner of one of her seafaring ancestors running his ship, issuing orders in short clipped sentences uttered in a peculiar sort of undertone which brings instant action from her assistants. As you might expect, the service at the Waterlot is speedy, civil and unobtrusive. Those who work for her adore Claudia.”

However, the proprietress was far from shy about joining in with her frequently high-spirited guests and more often than not was the life and soul of the party. “In spite of her years she will sign, dance and in general make ‘whoopee’ …with young and old,” wrote Lightbourn.

A Royal Gazette report in 1977 marking the reopening of the Waterlot after renovations noted: “A generation of travellers making the journey along Middle Road down what became known as ‘Claudia Darrell’s Hill’ would stop at the Waterlot for light refreshment and company. But as their company became more numerous, the refreshment they enjoyed became somewhat stronger.”

One night even Claudia’s threshold for tolerance was tested when the roof of a water tank collapsed under the weight of a young man dancing a hula-hula on top of it, sending him crashing into the deep dark water. Claudia mixed him a stiff drink to ward off the chill on his journey back to town but muttered: “Dammit-wish the man had drowned! That was the last water I had.”

Such was her joie de vivre that one group of visiting movie executives tried to tempt Claudia to Hollywood as the new Marie Dressler, to whom she bore a resemblance.

Claudia was also something of a wheeler-dealer. Not much seems to have happened in Southampton Parish without her knowledge, and at the Waterlot she facilitated many convivial business transaction, particularly the sale of much of Riddell’s Bay to wealthy Americans.

She was such a character-“as Bermudian as the cedar trees,” as Lightbourn put it-that she was frequently featured in American magazines, mentioned in the columns of visiting journalists and recalled by radio presenters describing a night of revelry at the Waterlot.

No wonder then, that when she died on August 28, 1949, from what was believed to have been a cerebral haemorrhage, the Gazette headline mourned the death of “one of the colony’s most colourful personalities.”

That night, reported the Gazette, Claudia, who had been in good health and “particularly cheerful that morning,” had been eating a bowl of cornflakes when she complained to a friend Clara Hutt of a pain in her neck. Mrs. Hutt called a doctor and helped Claudia to her bedroom, but she died within minutes, at about 9:30 p.m.

After her death, the Waterlot was sold to Jane Conyers and her American husband, Dan Carpenter, who renovated the property to comply with increasingly stringent health laws-Claudia never had a refrigerator in the place-and turned it into a full-fledged restaurant.

In 1951, it was taken over by the trio of Stanhope Joel, Reginald Evans and Ormond Zuill, and then it was sold to Mr. and Mrs. John Faiella, whose family still lives on nearby Rebecca Lane. In 1969, the inn was acquired by West End Properties Ltd., operators of the Southampton Princess, who managed the Waterlot as a gourmet restaurant for the hotel.

Waterlot Inn today retains much of its old Bermuda character despite renovations, the most recent in 1977 following a blaze. The wine cellar, once used by the seafaring Darrells to store freight and which Claudia later turned into a bar, is still there with its original cedar beams. There is still a “Claudia Darrell Room” for private parties, with photos of the grande dame herself, cigarette and bottle of beer in hand, looking down approvingly on proceedings from the panelled walls.

Legend has it that Claudia’s spirit is still alive at the Waterlot, making sure everything is in its place and that guests are taken care of. As Laura Prichard noted after Hurricane Fabian: “Up top [at the hotel], there’s devastation and the roof’s ripped off, but down here, it was little more than a hiccup. We lost a tree and a couple of shrubs. “It’s as if the old lady is still watching over it.”