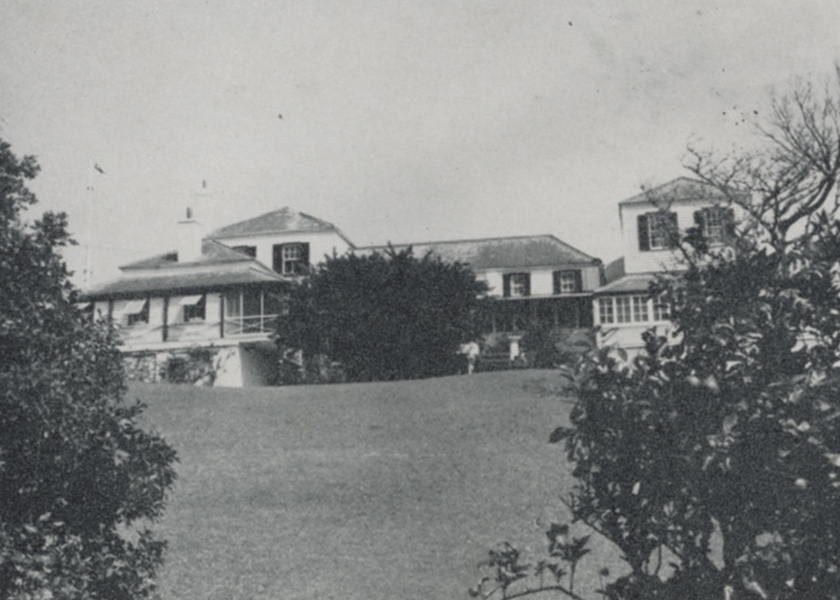 The History of Admiralty House

Written by: Margaret Worth

This article was taken from our archives. It first appeared in the November 1956 issue of  The Bermudian. It appears here exactly as it did originally.

The history of Admiralty House is a record of vicissitudes and conflicting hopes and opinions. It has been a bone of contention between resident admirals and their Lordships of the Admiralty at Whitehall on many occasions; it has been condemned to demolition, reprieved, patched up, added to, excavated and modernised in accordance with the demands or whims of its occupiers, some of whom have been men of decided views and strong individuality. It has emerged as a residence, artistically formless perhaps, and of little account by architectural standards, but in its very formlessness posting a charm and character of its own that make and immediate appeal. 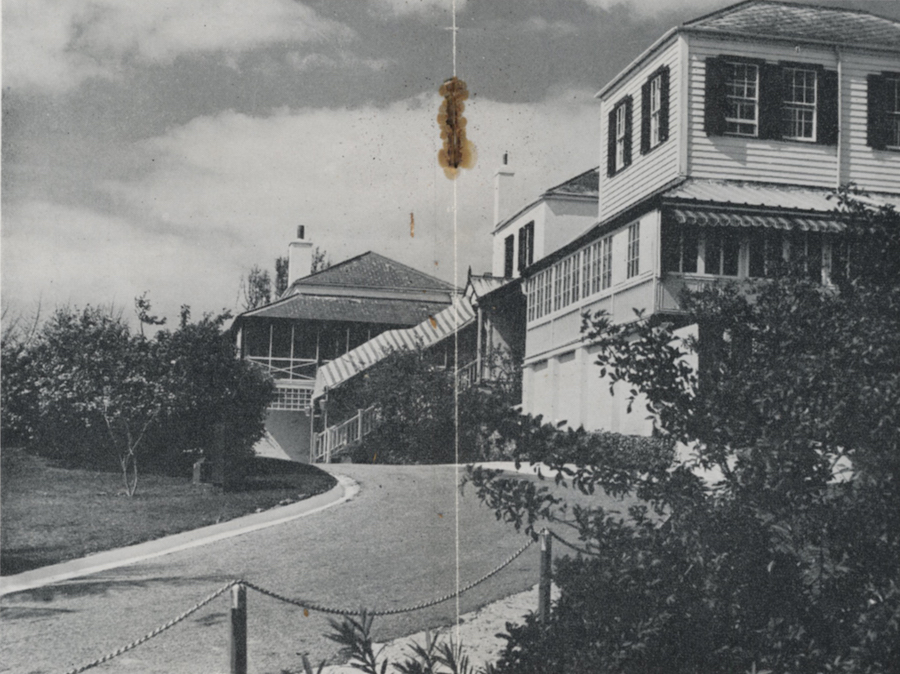 It became the official home of the Admiral in 1816 when the Bermuda Legislature voted a sum of £3,000 in local currency (the equivalent then of £2,000 sterling) to buy the estate at St. John’s Hill and presented it as a freehold gift to be “…vested in His Majesty, his heirs and successors for ever, as, and for the residence and use of the Naval Commander-in-Chief on this station…”

Previous to this deed of gift, the house at St. John’s Hill had been rented by Admiral Sir J. B. Warren for £60 a year because the one allotted to him by the government was in St. George’s and the establishment of the dockyard at Ireland Island required much of his attention. This was in 1810. Two years later he was given Mount Wyndham on Bailey’s Bay, commanding a view of both Grassy Bay and St. George’s. During this time, St. John’s Hill was used as a Naval Hospital. In the Cove garden can still be seen the grave of a midshipman, dated 1813, presumably that of one of the patients in the hospital, though legend has it that he was the victim of the mis-directed revenge of a betrayed husband who hid himself near the trysting-place of his wife and her lover. With a pair of pistols cocked in readiness, the tale goes, he awaited the approach of his wife’s seducer. A figure loomed up in he darkness smoking a cheroot, whereupon the infuriated husband shot him dead, realising his mistake only when it was too late to rectify it. 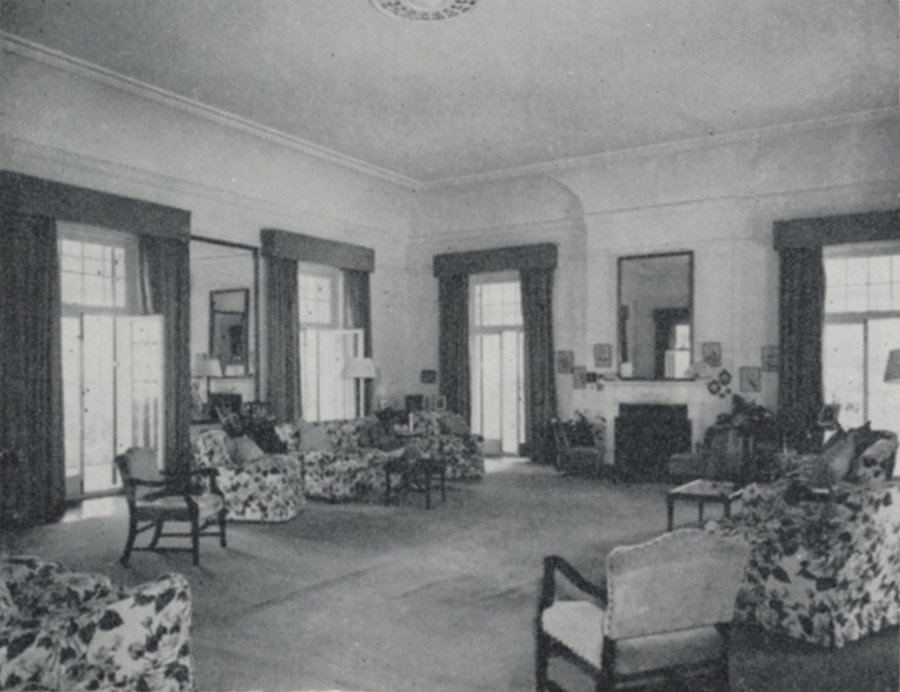 It was during the tenancy of Mount Wyndham that Admiral Cochrane sailed with his fleet to attack Baltimore during the war of 1812. On this occasion he performed the hitherto unprecedented feat of taking the whole fleet through the nine miles of dangerous reefs which constitute the North Rock Passage, and it was an American prisoner of war on board one of his vessels that was inspired to write a rousing song in praise of his country’s flag. The name of the prisoner was Francis Scott Key and he called his song “The Star-Spangled Banner.”

Sir David Milne, who was Admiral at the time when St. John’s Hill was presented to him, evidently preferred Mount Wyndham, for he continued to live there and sent his Flag Captain to the newly-acquired residence. Although much had been done to improve the property on its purchase, it is on record that a committee was appointed in 1819 to carry out repairs and further necessary improvements, and two years later, Admiral Falise, relieving Admiral Griffith-Colpoys, ordered the construction of a wine cellar, the paving of the paths and passages around the house and to the outhouses, “for the preservation of the health of himself and his suite,” and the fitting of jalousies and glass sashes to the verandahs. 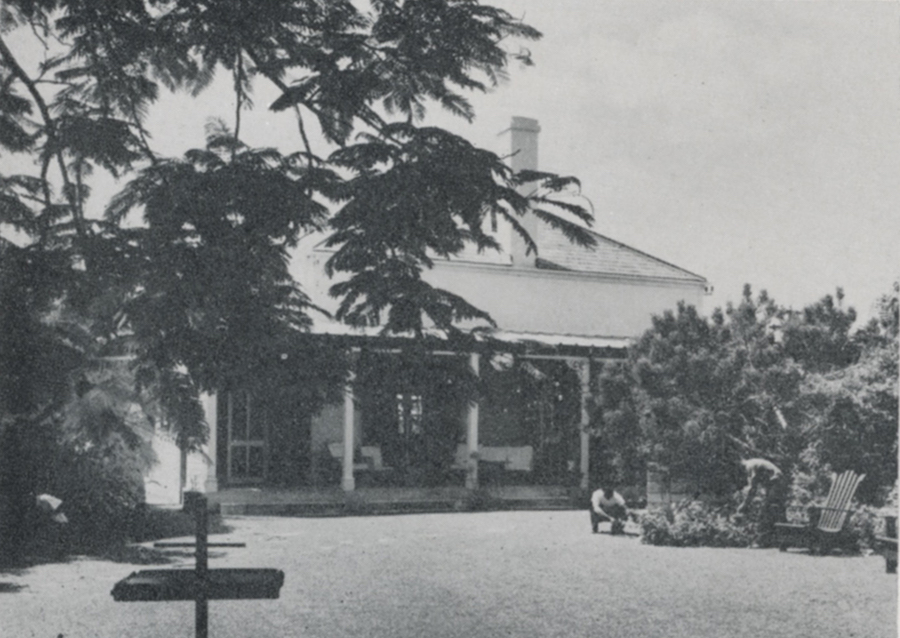 There are reports of surveys held in 1822 and 1824, in reply to the first of which the Navy Board expressed a definite wish that the annual repairs to Admiralty House should not be in excess of £50. The second of these surveys was much more emphatic in its report. It condemned the house in no uncertain terms as being unstable for its purpose, adding that nothing short of rebuilding could make it fit for residence by the Commander-in-Chief. An offer four years later by the Colony to add some reception rooms to the house led to several meetings, after the first of which the Clerk of Works, a Mr. Smith, who was responsible for the dockyard railway scheme, wrote a rather plaintive but determined letter to Sir Charles Ogle, the Admiral. In it he stated, “I am a man of few words and apt to be talked down by those possessing volubility of language… Four years ago I reported on the bad condition and decay of the house. I object to the proposal to build a new dining-room as the house is not worth it; it has cost in the five years gone by and will const in the next five years as much as will build a a good new house requiring no repairs for the next forty years. Sweep the ground clear, Sir Charles, have a plan of a villa for the summer residence of a gentleman’s family in England. It will do for a winter residence here. The Colony will, no doubt, give the stone in lieu of their present offer to enlarge the old house.” The “voluble” members at the next meeting evidently won the day, for a new reception and dining-room were added.

Plans for a new house were drawn up in 1844. Sir Francis Austen, then Commander-in-Chief, described it as “about to be a very handsome building,” and applied to the Colony for a grant of another acre of land. The ground was levelled and materials for the building provided; the hulk Resolute was moored in Boss’s Cove with 30 convicts on board who were to be engaged on the new building, but for some reason the whole scheme fell though and there is no trace of the plans.

Whether poor Mr. Smith was talked out of his post as Clerk of Works we do not know, but in 1848 his successor, a Mr. Anderson, proposed that a new house be built for the Admiral “in the early English style, to which the mode of building pursued by the natives has some affinity; this will also admit of external experiences and of every comfort and convenience required by the rank of the Commander-in-Chief.” He suggested that native labour could be employed cheaply for the work and the soft stone of the island used in the construction. But he had a formidable opponent in the person of the Admiral himself, Lord Dundonald, who in no uncertain terms inveighed against the proposed extravagances. “It has been proposed,” he wrote, “to spend £11,000 on a new Admiralty House. Don’t sanction it! Look at the Commissioner’s House. It has cost by the Dockyard books £56,000 … It is scarcely credible that there is an eleven-stalled stable and two coach-houses attached to this mansion, and that on an island only a mile long and unapproachable except by boat… Send out from England a house in frame saturated in sulphate of iron, a cottage also for the staff; both house and cottage should be of the simplest plan, no paper, no drapery but ample ventilation and roofed with blue slate.” What a blow to Mr. Anderson’s high hopes of “external experiences” – it is interesting to cogitate on the form they might possibly have taken.

But Lord Dundonald’s austere suggestion met with no better luck, for about this time a new building was put up to replace the dilapidated house and office of the Secretary, and the main house stood on with its numerous additions clinging to it like molluscs.

The ingenuity and forcefulness of Lord Dundonald found a fresh outlet in the tunnelling and excavating activities in which he indulged. He was responsible for the building of the pier, dredging Clarence Cove, making the underground passage that leads to the kitchen garden and paddock on the opposite side of the road and for digging out the extensive caves and galleries in the rocks facing the sea. The ostensible purpose of these excavations was to assist in the landing and disposal of stores from ships, as well as to supply a temporary storage place for perishable goods in a low temperature. It is reported that the Admiral celebrated the completion of the work with a magnificent ball, during the course of which the guests were led down stone steps into a tunnel from which they emerged into a great circular room some 40 feet in circumference, cut out of the rock itself, and proudly displayed by the originator of the scheme.

In the course of the years a kitchen, a dining-room, a room adjoining it, a ball-room and some bedrooms and bathrooms have been built on to the original structure. Additional plots of land have been acquired to extend the grounds, neighbouring cottages have been bought in and adapted as quarters or offices for the Admiral’s staff, (including the one that later became the mess for the secretarial staff which had to be purchased because it was a “a haunt of bad character”), and stables and outhouses have been erected. In 1931 a new entrance was constructed, there having been no main entrance to the house before this, the drive was widened, the electrical circuit was overhauled and a salt water sanitary system installed. World War II brought about a number of changes, when the ball-room was converted for use as a combined Base Cypher Office and Operations Room and several annexes built for the use of the increased staff.

The gardens owe much of their beauty and originality to the work of Admiral Sir Cooper Key, the contemporary of Governor Lefroy, and like him, a keen horticulturalist. He it was that imported the first red bougainvillea into Bermuda from the West Indies, and developed the cultivation of oranges and strawberries to a high degree of perfection. Like the house itself, the gardens possess that special charm of casualness that is so much more attractive than studied formality, and they have been the setting for many delightful parties. Overlooking Clarence Cove (formerly Abbott’s Bay, renamed after the Duke of Clarence, afterward Lord High Admiral, at the time St. John’s Hill became Clarence Hill) is the great figure-head of the old Irresistible, an enormous figure of Neptune, which has watched many an Admiral come and go under his benign gaze. Now the Admiral has departed for the last time; the parties and balls are all over; a focus of social life over many years has disappeared; and the house that has been a beloved port-of-call and a haven of rest for numberless weary mariners awaits the official ruling that will decide its future fate.