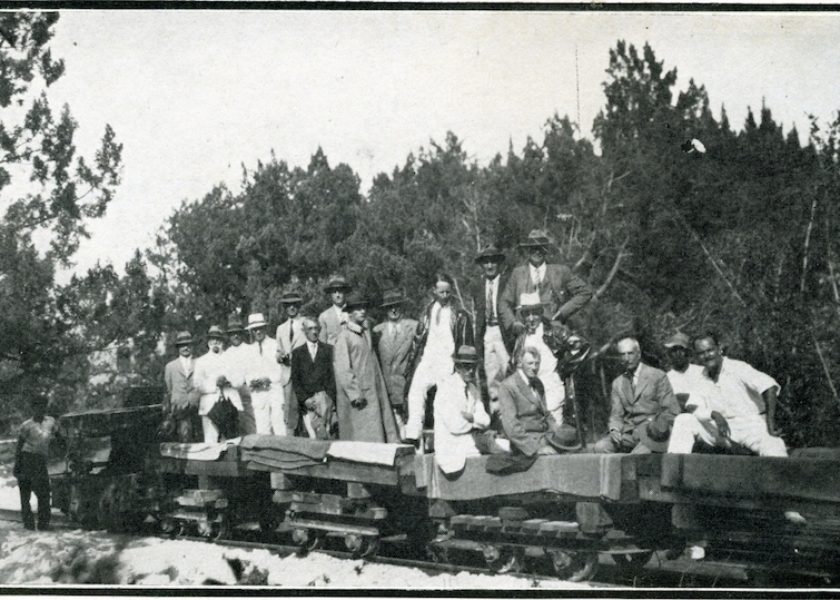 Written by: Janet A. Dublon

This article was taken from our archives. It first appeared in the July 1931 issue of The Bermudian. It appears here exactly as it did originally.

It’s not every day in the week that one can hop down in a strange country and be a “first passenger.” What luck for me! A mere visiting-American-tourist, I had an invitation to ride on the first train ever to run on the Bermuda Railroad with a load of passengers — the very first.

It happened through a chance meeting with Mr. Geoffrey P. Barker, who had come from London to look over the new enterprise of his company (for an English company is building the road). I mentioned a desire to see new things to write about. He told me about the new railroad, but…

“You will take your life in your hands,” said Mr. Barker. “Only work trains have been on the road so far. Maybe there will be a landslide. Maybe something will happen to the track. Maybe the ballast (in the United States I learned to call it “fill”) will cave in under us. But I think not.”

I ignored the remote danger and snapped at the chance to make history. A carriage took me to the Elbow Beach crossing and there I sat, on the morning of May 15th. The driver was resting, the horse was resting, but I was waiting impatiently for the locomotive to come along and pick me up. I pictured a black, round-bellied caboose like the steam-puffers we have in the States and waited to hear its hoarse screech.

“Tootle-de-oot!” There sounds a cross between a whistle and an automobile horn and up the track comes a strange conveyance, not at all like my advance ideas. It looks like an enormous truck, whose owner has dressed it up for a picnic. It does not belch steam, for it is, I discover later, a well-behaved petrol eater. Its previous role has been that of ballast carrier, but Sally, as I immediately name her, has now been scrubbed as clean as the deck of a ship. Three double rows of benches have been built and anchored firmly. They could seat two on each side, or twelve in all.

The new white wood glistens invitingly, but there are only five passengers in this first “coach,” which has already made the fifteen minute run from Hamilton to Elbow Beach Crossing. Two more fares, myself and a construction engineer, climb up the new steps in the back. Those who are already at home in “Sally” are Mr. Geoffrey of Scotland, Mr. Jones, another Englishman, chief Bermuda engineer in charge of the road. That comprises the official testing, inspection party.

So far, two Englishmen, a Scotchman, an American, but not a real Bermudian in sight! The nearest approach to a native son is Mr. Charles Blair Macdonald, an American well known to all devotees of golf, whose Bermuda home is at the Mid-Ocean Club. The feminine members of the party were myself, a first-timer in Bermuda, and Louise Stark, American, whose coppery hue testified to a great deal of Bermuda winter 1931 sunshine.
All our skins are precious to ourselves, and perhaps to others, but there’s not a government official in the lot, so we dare to ride the eleven untried, unproven miles to Somerset. The next week, after we have risked our lives in proving the safety of the roadbed, the official “first” ride is scheduled. Right now, I can only wish you a trip as pleasant as ours promises to be, Messrs. Governor, Mayor and Parliamentarians.

The whistle-horn shrills again, and we are off at high speed, fifteen miles an hour, for this is solid road-bed here in Paget Parish and Warwick. Our locomotive engineer is invisible in the caboose, but a man stands up above in front to relay instructions from Chief Engineer Jones to the driver. “Slow down” it is at crossings, “crawl along” when we come to places where the road bed is not completely finished.

We wind through a green and cut across the smooth, velvety turf of the Belmont Manor golf links. On the landward side lie the rolling cedar-covered hills at the center of the island, while northwards, on our right is blue Hamilton Harbour. I have driven through Warwick in a carriage to Gibbs Hill, and I have followed the soft crunchy South Shore roads with Jimmy the Groom and Ginger the Hired Mount, but never before have I had so perfect a view of the island. The height of the car added to the elevated road bed, makes a perfect vantage point. Railroads spoil Bermuda for the visitor in search of quaint spots and natural beauty? Never. Each turning brought us into contact with new loveliness… here a tall palm, a drift of pink oleanders, or a family of Bermudians before their clean white house, waving to Sally and her passengers gleefully.

Past Riddell’s Bay Golf Course we climbed and up on a trestle, high over the green land below, with a fine view of Little Sound and its raggedy coast and numerous islands. Then down again into the valley below Gibbs Hill Lighthouse and on uneventfully through Southampton. This was a new part of the island to me, and one more rustic-looking to my eyes. Fewer houses visible and those looked older and more interesting.

But no time to stop, we must hurry on to a rendezvous with a speed boat. For when we took our ride, the bridge to Somerset Island was not completed and we had to leave Sally behind. At the Southampton end of the roadbed we climbed down to the waterfront, embarked and poked around Ely’s Harbour, past Cathedral Rock (which really didn’t look like even a ruined cathedral to me) and then came back to the Bermuda Railroad.

But what a change! No nice, new ballast car this time. No, nothing but narrow gauge construction tracks to ride upon and flat cars hitched together. Long logs tied on lengthwise were the seats this time, with the one luxury of new steamer blankets. I picked a seat and was advised to move, because it was just where two cars were tied together and they might decide to part company!
A little ride, then a walk over tracks as yet unsafe. The flowers of Somerset Island were new to me. Yellow buttercups and Scotch heather and violet furze and all sorts of wild weeds grew in the fields and seemed more like familiar Northern flowers than the tropical cultivations of Hamilton and her hotels.

Here I saw a graphic illustration of the sparsity of Bermuda’s soil. A naked railroad cutting showed a depth of black earth of only eight inches, and below that solid rock! But on that eight inches, grass and wild flowers grew riotously.

We walked past Scaur Hill and saw the grim cutting from the old fort down the side of the hill to the sea. When soldier used the garrison in pirate days, they dug out the groove to get water unmolested by enemy guns. Probably the same soldiers who, homesick, put up the sign-post which reads “London, 3,075 miles.”

Ten minutes walk brought us to more solid track, and again we found a flat-bed car awaiting us for the last lap of the journey. This part of the road is the oldest, and the sides of the fill are already overgrown with bright blue morning glories (I think our American name is much more than the accepted Bermuda “Convolvulus”). When all the roadbed is covered with flowers in that fashion, none will be able to call the railroad unbeautiful, for it will probably add the charm of the countryside through which it passes.

It wasn’t long before we reached Somerset terminus and the end of our exciting, thrilling “first” ride. But by the time this appears in print (magazines and printers’ schedules being what they are) railroad rides in Bermuda should be no novelty. Real cars will probably be going at thirty miles an hour, crossing the completed bridge to Somerset Island.

Sally will be forgotten and passenger cars, divided into first and second class compartments, will take her place. But to United States visitors, they will, I am sure, always be nothing more than “one-track trolley cars,” railroad trains though they may be to Bermudians. And one-track trolleys are as quaint to subway-hardened tourists as are your bicycles and victorias… so I am sure Bermuda will lose none of its old-fashioned charm for visitors.