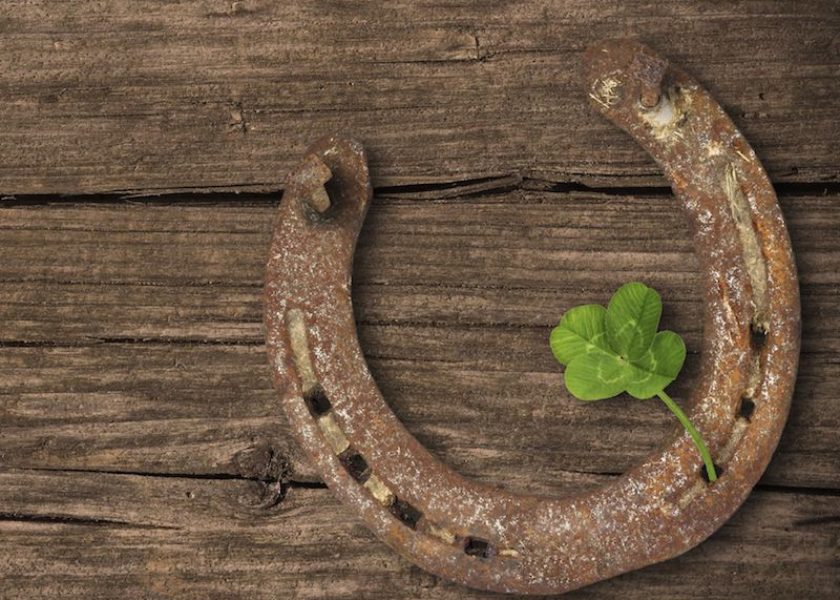 This article was taken from our archives. It originally appeared in the August 1930 issue of The Bermudian. It appears here exactly as it did originally.

“Of course we are not superstitious!” We contend as we surreptitiously tuck a four-leaf clover in our shoe or walk around a ladder. Some superstitions are universal, yet every country has a few of it’s own. Mrs. Maud Godet herewith presents a few beliefs we all must hold if we are to be real Bermudians.

Bermuda, in coming with other lands, has its local superstitions; one of the best known is the curse laid on the Annual Agricultural Show held last April. When the first show was being arranged, way back in the eighteen-eighties, an old vendor of peanuts and cocoanut cakes was refused permission to have a stall on the grounds for the sale of her goods. She stood up and solemnly laid the curse of rain on the Exhibition, and ever since, more often than not, the curse has come true; “Exhibition weather” has become a by-word.

There are other superstitions for which I cannot find a reason. For instance, when the good-wife is stirring the cream for butter (it is commonly made here with a wooden spoon in a bowl) she naturally wishes to know the state of the tide, for the butter will only “come” when the tide is flowing. You may stir all day on an ebb tide without any result. If she asks what the tide is doing, she will be told to “look at the cat’s eyes”! And how she finds out the state of the tide from the cat’s eyes, I have never been able to discover.

If a house becomes infested with ants, the house-wife has a sure cure for the infliction. She goes to the nearest cross-roads with a small box and collects some “wild ants”. (Wild ants are larger, blacker and can run more quickly than the same tame and domesticated variety.) These wilds ants she liberates in the house and they proceed immediately to drive out the tame ones and the house is soon free from the pest. Then the wild ones return to their cross-roads. I have never tried this remedy, but I have been assured it never fails. Another thing the house-keeper is very careful about is to do all her sweeping in the morning, for us she uses brush or broom after three o’clock, she sweeps all the luck of the house away.

There are many superstitions with animals; it is seven years bad lick to kill a cat; cocks crow on a calm night for the change of wind to South East, the donkey brays on the hour of the half hour; whales are always seen off Gibb’s Hill on Good Friday, if you kill a spider it will rain the next day; and by the building of the silk-spiders the weather can be foretold. If they spin their webs high, connecting young cedar trees, it means calm weather; if low, stormy and windy.

Hurricane season is from the first full moon of August to the full moon of October, and a good crop of Avocado pears means a hurricane year. Those months in a “Pear Year” are viewed with suspicion.

I was once given the following bit of doggrel as a weather prophecy:

If a funeral is held from a new house before a wedding takes place in it, it is certain that no daughters of that house will marry and in paying a call at a new house be very careful when you leave, to go out the door you entered, if you leave in any other way you will never return.

Bermuda has few ghost stories, but I have heard that Darrell’s Wharf is supposed to be haunted. Also that one of the Governors of the Island was supposed to beat his wife, and now you may meet a man, dressed in all black even to his collar, in the driveway of Government House who looks in your face and disappears, and the skirts of the Governor’s Lady are to be heard rustling on the stairs of the house.

One of the old boatmen told me years ago, that he had seen the ghost of Skeeters, the murderer who is buried on one of the islands in the Sound. He had been out in his boat, the weather came on by and he was trying to get back to Hamilton Harbour. The rain poured, the wind howled and thunder crashed. By the flashes of vivid lightning he saw Skeeters dancing and leaping on the rocks, waving his arms and gesticulating wildly. “I was scared out of my wits,” he said, “but I put the boat before the wind, and I put my trust in de Lord, and we came down Bully!”