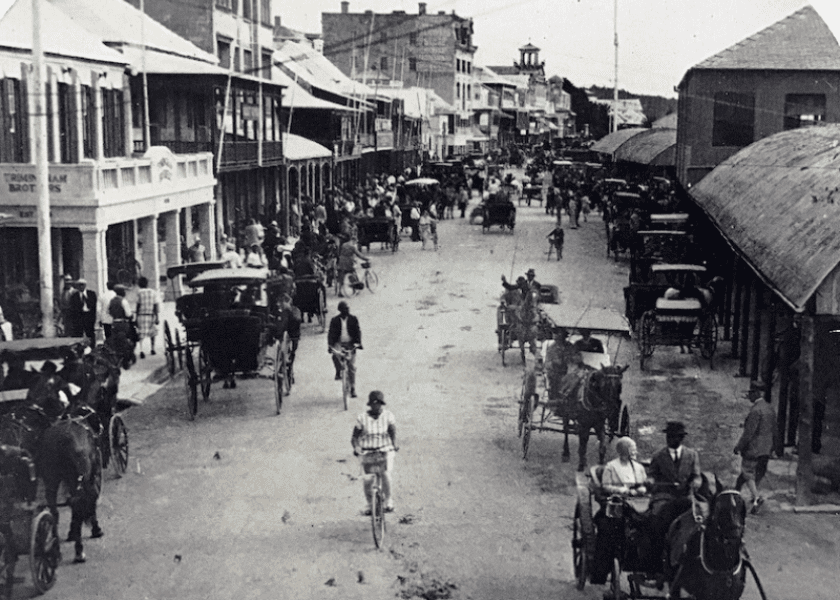 This article is taken from our archives. It appeared in the very first issue of The Bermudian Magazine in February 1930 and was written by Margaret Copp, who gives a charming account of her visit to Bermuda where she hired a bicycle and toured the island from one end to the other, often covering over 20 miles in a day!

“SEA-SICK six times,” I wrote on the back of a letter that would return to the states the next day on the motor ship Bermuda. Land was slowly appearing in vague shadows to the south. After all it had not been a bad trip now that it was over. But my ego was shattered. I had thought myself a good sailor. I had marched the decks nobly with others who were trying to be good sailors. But there had been times–. Still all the ships company told us it had been the roughest trip for months. My return voyage was perfect. Later experience proved they were not just trying to give the trip a good name. And the boat was luxurious. It must have been a bad trip if one were ill on such a ship.

I looked at the water and added another postscript. “I’ve never seen such water,” I raved, “Such a blue! The kind you can just gaze upon and forget your troubles. I never knew what blue was before this.” (The letter was to a very dear friend to whom I could say whatever came into my head to say.)

Green islands became more distinct. The little world I meant to conquer spread out before us, unaware.

We approached Hamilton. One sign greeted our eyes. “Welcome to Bermuda. This is a Rexall Store.” That was the one sign of any proportions we would see in all Bermuda. The anchor rattled down.

One of the first things I did after getting settled on the Islands was to purchase a second hand bicycle for five pounds ($25.00). Then with the aid of a map I began my own private discovery of Bermuda. The whole length of the Islands is not over twenty-two miles. “An easy distance,” I thought, “to cover on wheel.”

After a few bruises, severe reprimands from the extremely “high-hatted” Bermuda police, I had sufficiently mastered such things as brakes, keeping to the left, turning on my attached flashlight at “lighting-up time,” and other details to feel myself quite a devil on a wheel. I had also learned that only “tourists” insisted on riding up hills. Bermudians dismount and walk up steep inclines. It is far less tiring.

My first trip was St. George’s, eleven miles away from Hamilton, at one tip of the Islands. At about one o’clock of a perfectly beautiful September afternoon (the Calendar indicated December) I blithely started along the North Shore Road. I left Hamilton, passed the Parliament Buildings, walked up the hill by Government House, and rode down Bermuda’s own “Khyber Pass” rock-walled, and out onto the Shore Road stretching white in the sun.

I passed the famous “ducking stool,” a rock formation in the water admirably adapted for its ancient use from which in former days recalcitrant maidens were forced to submit to immersion. The road was fairly level and I whizzed along with the wind behind me, even at times passing the carriages, and other cycles.

Further on I passed the Hotel Frascati and Golf course, and the gleaming white roofs of Flatts Village. Here I paused for a visit at the Aquarium to look over the weird and fascinating octopi, beautiful angel fish, the bristling porcupine fish and a host of other strange natives of Bermudian waters. I left reluctantly, but I had to be on my way.

Around Harrington Sound the scenery was particularly beautiful. Rugged rocks, far away vessels, and blue blue water. During my whole stay in Bermuda I tried to find a word to frame that color but it was impossible. Its hue is combined with opals, jade and sapphires.

Past the Shelly Bay race track I came upon the famous crystal caves. I stopped long enough to go through “Wonderland.” It is exceptionally lovely, boasting a salt water pool that rises with the tide inexplicably.

Then I went on again coming to the long causeway that ties the Island of St. George’s to the mainland. The wind blew freely across St. George’s Harbor to the sea. With a wagon, a carriage, and a few other bicyclers I waited while the bridge slowly went up to allow a speed boat to pass beneath.

A half hour’s swift pedaling and I had reached my destination. The drowsy little town of St. George slumbered before me, dominated by the great hotel on the hill. The streets seemed devoid of any set purpose, winding around the village in a queer jumble. The stores, the little houses huddled together comfortably. It was the most restful place I have ever seen in the world. It seemed as though nothing could possibly ever disturb it. Featherbed Alley, Old Maid’s Lane, the tiny streets wove in and out as tranquilly as the thoughts of a contended philosopher.

I stopped at the silent Snow Plant Inn for refreshment, the only one eating there at such a time as three o’clock of a Saturday afternoon. Now and then a bicycle bell tinkled on the road outside, of the clatter of a horse and buggy disturbed the absolute stillness. As dessert to my frugal repast I bought an American candy bar at the apothecary’s on the most serious-minded of the streets. Only then did I remember that I had a long way back to go and that I must stop and see Tom Moore’s house. I did not want to go though. I wanted to stay, get a small house by the sea somewhere and just live there for a time. Someday when the noise and rush of the world in New York has become too much for me, I promise myself that I shall do so, for a few months anyway.

Across the Causeway and back on the other side of Harrington Sound I began my search for Tom Moore’s house. There were no sign posts to direct me, I had to ask the polite little children. After following a rugged dirt road that led into a wilderness of cedar and paw-paw, Bermuda’s own Jungleland, and feeling certain I was quite lost, I came out to another road, and a squat old fashioned Bermuda house. On the porch a kindly old gentleman was sitting.

A very cordial woman came to the door and hospitably showed me through. The place had been turned into a now popular tavern and fairly exhaled Dickens.

When I left “the sun was sinking and the winds were beginning to rise,” and I took the South Shore route, passed the Harrington House, Devils Hole, and left the South behind.

The South Shore stretched its rockiness, its pink shores, and blue bays at my side. But the wind was against me now and I had a long fight against it that was harder than an uphill climb. A twenty-two mile trip is not a short journey on a bicycle! I was slowly realizing that by the time I wended my way back to the bright lights and cheeriness of Saturday night in Hamilton. Hot tea and rich homemade cinnamon buns at The Oasis did a great deal to quench my hunger.

I made a few more short trips in the days ahead before essaying the other end of the Islands, to Spanish Point, Spanish Rock, Fairyland (a moonlight ride through the woodlands to the sea), and other places mentioned in the guide book.

Then one bright Sunday morning I started out early, with the indispensable guide book, lunch, camera, and bathing suit. (It is wonderful how much a bicycle basket will hold.)

It was a beautiful blue day. The air was full of Bermuda’s own subtle fragrance of crushed flowers and cedar. I took the middle road through the parishes of Warwick and Paget, where one could lose for a little while the generally omnipresent sea. There was a hill, cedar covered, surrounded by little farms that made me think of Maine.

At the foot of Gibbs Hill Lighthouse the road melted into one and from there on one follows the sea. I saw His Majesty’s gracious ship “Avon” disappear slowly into the horizon towards New York. In two short days it would be back to winter.

Here everything was intense with life. A bluebird passed. A flaming red cardinal punctuated the deep green of the cedar trees. The blue water was covered with small frosty white handkerchiefs. The potato crop had just been harvested and revealed ruler-cut patches of rich brown earth. And around every turn one came to secret little bays on one hand, or an old Bermudian house of native coral with its wide red “welcoming arms stairways,” on the other.

Old churches appeared now and then approaching Somerset. One had flying buttresses of coral molded grey and green and orange with damp and age. The old houses were more softly rounded. The walls that lined the road had small trees and shrubs springing from their rocks. Age had passed a mellowing hand. One house sprang directly from a wall.

Warnings of a bridge. I slowed down a hill for a bridge just as big as a minute. Then Somerset town was reached, more old churches, some proud municipal buildings, Cavello Bay, an aching blue. And then – the end. All that stretched before me was Ireland Island with its barracks, and the sea.

By a little bay I stopped, went swimming, and had lunch. I had only the sun and my hunger to tell me the time. I rested a while and then turned towards home. Darkness came with a cooler wind, and I was glad to hurry. The wind was strong, and the great lighthouse at Gibbs Hill began to flash its warnings far out to sea. There were many hills to walk. I was glad when I at last reached Hamilton, tired and hungry. But I had seen Somerset, another place, like St. George’s, serene and restful, untouched by time.

My stay in Bermuda was over. Regretfully I sold my wheel, promising myself to return again and travel more.