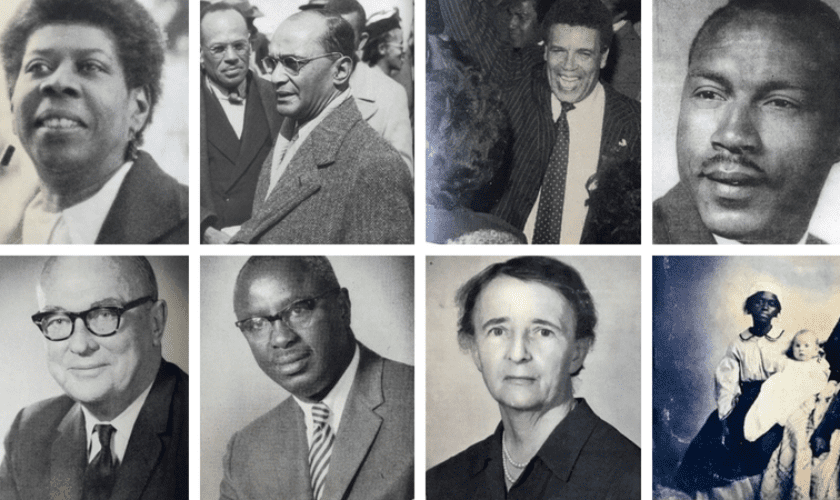 National Heroes Day is Monday, June 20th. Take this time to appreciate the endeavours and successes of our national heroes and where we are now because of them.

Dr. Edgar Fitzgerald Gordon (1895-1955)
Having arrived in Bermuda from Trinidad in 1924, Dr. E.F. Gordon was a member of Bermuda’s Parliament and the founding father of the labour movement, championing the rights of black workers and supporting Bermudian workers of both races. Considered one of the most important leaders of the 20th century, Dr. E.F. Gordon was the president of the Bermuda Workers Association and the forerunner of the Bermuda Industrial Union.

Dr. Pauulu R.N.O.B. Kamarakafego, Dr. Roosevelt Brown (1932-2007)
Civil rights leader and political activist, Dr. Pauulu R.N.O.B. Kamarakafego (born Roosevelt Brown) played a key role in the fight to abolish the property vote in Bermuda. He was also an ecological engineer, member of Parliament, worked in Vanuatu and other developing countries, was a consultant to the United Nations and was the first recipient of the UN Human Rights Commission’s Human Rights Award.

Sir Henry James “Jack” Tucker (1903-1986)
Credited with overseeing Bermuda’s transition to a modern democracy, Sir Henry Tucker was both a banker and member of Parliament, who piloted the bill that gave Bermudian women the right to vote in Parliament in 1944. Sir Henry Tucker is also considered the founding father of international business, the first Government Leader of Bermuda and the founder of the United Bermuda Party.

Mary Prince (c. 1788-unknown)
Born into slavery, Mary Prince endured the harsh realities of what it was to be human property, which included the separation from her family and unimaginable abuse. While in London in 1828, she fled the family she labored for, ultimately gaining her own freedom. Mary Prince went on to write an autobiography titled The History of Mary Price, published in London in 1831. Prince’s book is the only first-hand account of slavery by a Bermudian and Prince is regarded as an international heroine of the abolition movement.

Gladys Misick Morrell (1888-1969)
Born in 1888, Morrell got her start nursing wounded soldiers in France during the first world war. She went on to found the Bermuda Woman Suffragette Society, leading a 25-year battle for women’s voting rights in Bermuda. Not only did she campaign for the right to vote, Morrell also fought for better health care and college scholarships for women.

Sir Edward Richards, KT., CBE (1908-1991)
Sir Edward Richards arrived in Bermuda in 1930 from British Guiana as a teacher at The Berkeley Institute. Working as editor of the Bermuda Recorder, Sir Richards challenged segregation and fought to end social, racial and political injustice as a lawyer and member of Parliament, later becoming Bermuda’s first black leader and Premier and the first black Bermudian man to receive a knighthood.