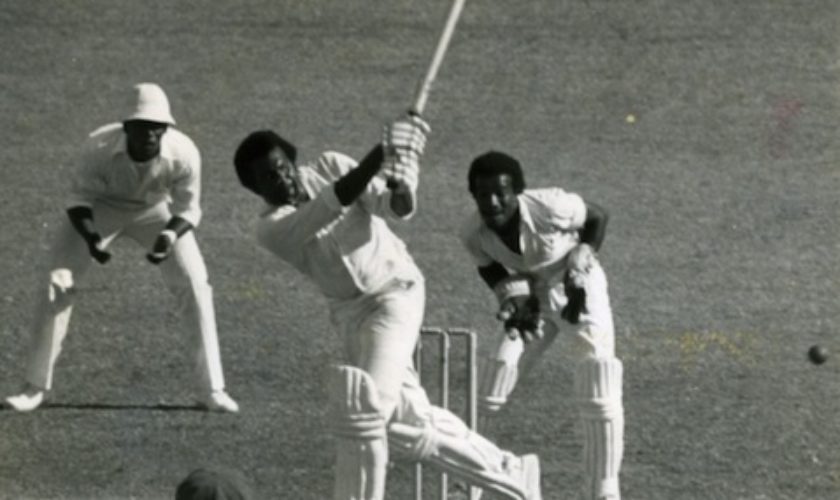 Published in The Bermudian May 1991.

Nowhere else in the cricketing world, not England where the great game was invented nor in the cricket-crazy Caribbean does a whole COUNTRY celebrate a cricket game quite like Bermuda. The food, the fashions and the Crown and Anchor tables are as much a part of the scene as the cricket itself.

Technically, the Thursday of the two-day sporting bacchanalia is actually Emancipation Day. The Friday is Somers Day, to commemorate the accidental landing of Sir George in 1609. But since 1944, when the St. George’s and Somerset clubs petitioned His Excellency the Acting Governor to move Somers day to coincide with the match, Bermuda has had a two-day holiday on the Thursday and Friday before the first Monday in August, although the match was held on the Friday and Saturday during the Second World War “in the best interest of the war effort”, by not interfering too much with the working week.

Before the War, the match had always started on the Thursday so that people could take advantage of the then weekly half-day holiday when many sporting events were held. By the 1940’s many businesses gave the Friday as a general holiday to their staff- and those that didn’t often found staff suddenly taken ill on the Friday but well enough to watch the cricket!

So how did it all begin, this colourful cross between a carnival, Test match and working man’s Ascot?

The first Cup Match was played in 1902- actually there were three games that first year- but the match has its roots in the latter half of the 19th century.

The game was introduced to Bermuda by British soldiers stationed in St. George’s and members of the Royal Navy at Dockyard. The first recorded cricket match in Bermuda was played in 1846 between British servicemen. Bermudians, and black Bermudians in particular, fell in love with the game.

Without proper cricket gear, Bermudians did what they always did- improvise. They carved bats out f oleander trees and wrapped a stone in cloth to create a crude ball. With the formation the all-black Bermuda Militia Artillery in 1890, cricket flourished as Bermudians took advantage of the proper sporting gear provided by the army and the keen opposition offered by games against the Navy and Army.

By the turn of the century- no one is sure exactly when- the St. George’s and Somerset lodges of the Grand United Order of Oddfellows had begun playing each other in an annual friendly cricket match as part of a yearly picnic to mark Emancipation Day (August 1, 1834).

The matches grew in competitiveness and in 1901, after a particularly thrilling clash at the Garrison Field in St. George’s, where the home team won by a run with the last man in, it was suggested that a cup be played for annually.

It was agreed that the first match, in 1902 would be the best of three one-day games and the winner would then hold the cup and host the annual match on their home field until the challengers won it back. It was not until 1941 that the present format was adopted of switching the venue every two years unless the visiting side won the first year. Remarkably, there appear to have been few negative tactics employed by the cup holders as only four of the matches up to 1943 were drawn- and one of those was because of rain.

The very first Cup Match was played on June 12, 1902 at Royal Naval Field, Somerset having won the toss of a coin for the right to stage the first game.

The match ended in a resounding victory for St. George’s by seven wickets. Remarkably, the teams were tied after their first innings, both having scored 73.

Somerset, batting first, made a solid start with captain Thomas Simons (22 runs) and John (Hodder) Simons (19) putting on 43 for the first wicket before John was bowled by Joseph Brangman. From then on it was downhill for Somerset as Brangman whipped through the rest of their order to finish with figures of 5 for 23 from 12.3 overs which included two wicket maidens and two wickets in his final four balls.

John Simons exacted some revenge on the St. George’s batsmen, taking 3 for 12 as only wicketkeeper Nicky Callabrass, a future captain, offered any resistance with 34 before being run out.

But Brangman returned to torment Somerset like no other bowler would until Clarence Parfitt in the 1960s and 1970s. Somerset’s second innings was over in just 102 balls. Brangman bowled 60 of them and of his 10 overs, nine were maidens and he claimed an amazing five wickets for just three runs, quite overshadowing teammate E. Mathie’s equally respectable figure of 4 for 17.

Brangman was a fast medium pace bowler, according to the fiftieth anniversary Cup Match brochure: “Small of stature, he imparted much spin on the ball his off-breaks.” Brangman played just five years in Cup Match but to this day he remains top of the all-time Cup Match bowling averages, having taken 31 wickets at just 6.68 runs apiece.

After Brangman’s heroics, victory was a formality for St. George’s and they knocked off the required 25 runs in 57 balls for the loss of three wickets.

The second match of 1902 was staged at the Garrison Field in St. George’s on July 12 and again Brangman had Somerset in trouble. In their first innings, he took 5 for 21 in 11 overs as Somerset were all out for 83 with Thomas Durrant top-scoring on 16.

John Simons, however, also enjoyed a fine day with the ball and his amazing 3 for 2 from just three overs mopped up the tailend- including the wicket for Brangman, as St. George’s could only muster 53 in reply. Virgil Simons took 3 for 11 and again, only Callabrass made any impression on the Somerset attack, scoring 22.

John Simons just got better as the match went on. He top-scored with an unbeaten 24 as Somerset made 97 against the bowling of Tom (Yankee Tom) Richardson (5 for 24 from nine overs) and Brangman who took 2 for 33 from 11.

Then Simons devastated St. George’s hopes of victory with an amazing 5 for 16 performance from just 12 overs. The East Enders were all out for 40 with half of those scored by their captain A.C. (Brodie) Smith.

And so it was back to Royal Naval Field for the third and deciding match on August 21 where the St. George’s batsmen evidently again found John Simons unplayable. He took 6 for 17 in 11 overs and with Virgil Simons taking 4 for 16, St. George’s crashed to 34 all out with only John Henry Crobin making double figures (12).

Brangman again bowled well, taking 4 for 27 in 14 overs including five maidens, as Somerset scored 65 for 6 with George Trott unbeaten on 26, and Sammy Burt a raffish character who went to the crease in a white cloth cap and a black silk sash about his waist, on 17 not out.

What happened next is something of a mystery. With no newspaper reports of Cup Match until 1912, there is little documented evidence of the early games and even sources and results can differ wildly. Suffice to say, there appears to have been some sort of brawl and the game was abandoned.

Happily for cricket and Bermuda, Cup Match resumed and while it has seen sit-down protests and stumps being kicked down in anger, it has remained an annual institution to this day.

The folklore and traditions of Cup Match have been passed down through the generations and one imagines the game’s founders would be proud to see those traditions continued. However, former Somerset captain Thomas Durrant, who played in all three 1902 games and lived to see both sons Edward and Arthur play in the annual game, remarked in the fiftieth anniversary booklet: “Times have changed and present day cricket don’t compare any too favourably with the game during the period when I played.”

Former Somerset captain Arthur Simons, one of the greatest bowlers Bermuda has ever produced and whose father Howard and uncle Virgil Simons played in the first games, wrote in his 1943 book Bermuda Cricket Reminiscences: “I think that apart from my prime necessities, cricket must have been one of the first things I grasped. It was from the time I knew myself that it was the most important recreation in our household.

“My father and uncles were sportsmen known by many. Cricket was handed down from my ancestors as far back as could be remembered.”

Alma (Champ) Hunt, Bermuda’s great all-rounder and journalist once wrote: “through the Cup Match, cricket still lays claim to the belief … that it is the most democratic of all games. It has the power to merge the community into one spirit- one mood- and why not one world? – for two days at least …”

Arthur Simons recalls his pride in stepping off the steamship Corona at St. George’s with the Somerset team n 1939 to be greeted by a crowd that followed the team bus to Wellington Oval.

“Many spectators arose”, wrote Simons, “several little boys crowding around the bus. I glanced over several of heir faces. I could see various expressions, some appearing to say, ‘I wish I were a cricketer’.”