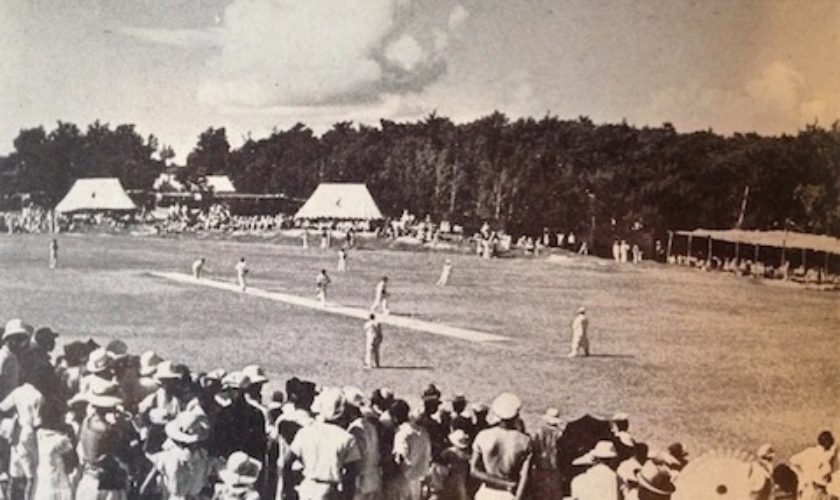 Article originally appeared in the September 1937 issue of The Bermudian

East End versus West End – the annual two-day cricket match has been a gala event in the Colony for thirty-five years. It was estimated that the thirty thousand population of Bermuda no less than seven thousand witnessed the spectacular tussle, which took place in Somerset on July 29th and 30th.

In the guest marquee sits the Governor-General, or should be absent from the Islands as was the case this year, the Acting-Governor. With him are high officials, and some fifty or sixty others who have also received neatly printed invitation to the match.

The margins of the field swarm with cricket fans of both races, wearing gaily coloured clothes and flaunting the red and blue of Somerset, or the light blue and dark blue of St. George’s. The band of the regiment garrisoned here, in this case the Sherwood Foresters, play lively airs intermittently throughout the two days’ play, while here and there among the great crowds are smaller string bands, mostly amateurs making their own brand of musical whoopee. The atmosphere is festive as Derby Day in England, and indeed the multitude itself resembles a racing crowd rather than the less demonstrative cricket gallery.

Trains and ferryboats and motor launches, private carriages, hacks and bicycles bring people from all of the nine parishes, and why not? It is here that you may expect to see the finest cricket played in Bermuda. For hundreds it is the only cricket game they trouble to attend throughout the year, for the Cup match is more than cricket, it is a rare spectacle worthwhile witnessing, with the crowd furnishing much of the entertainment.

In this, the Thirty-fifth Cup Match, it was expected that St. George’s would wrest the Cup from Somerset for the first time in six years, and the East-Enders almost did so, failing to establish a win because they lacked the time. The match was drawn, the sixth indecisive battle since 1902. Yet the second innings of the St. Georgians, which gave them less than an hour in which to make the 154 runs which would put them beyond the total score of Somerset, provided the spectators with the most exciting and thrilling hour of cricket ever seen in Bermuda. The quality of the play was easily comparable to the best English county cricket.

At the end of the match, prizes were presented by the Hon. A. W. G. Grantham, well over a dozen awards going to the hero, “Bosun” Swainson of the St. George’s eleven, who smashed the Cup Match record by scoring the first century in the thirty-five years’ history of the colourful match, beating the former record by no less than 40 runs.