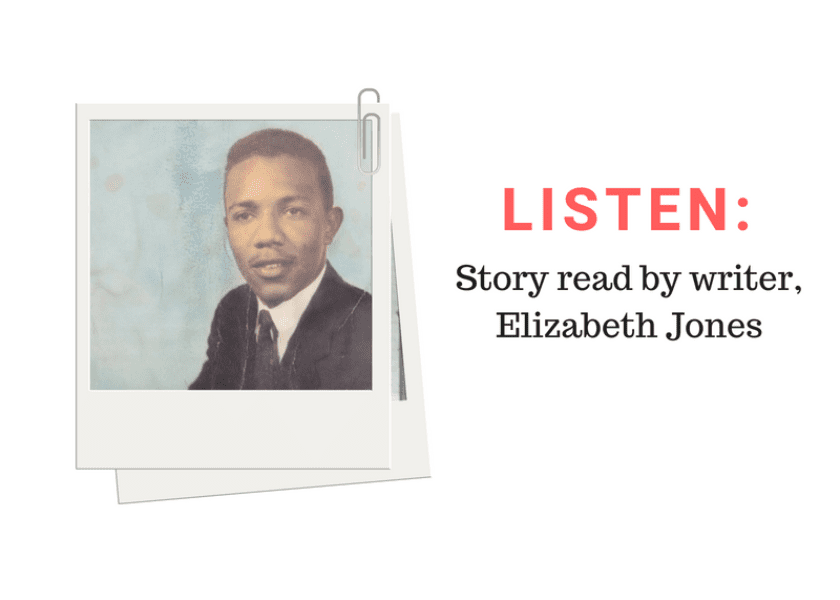 Where I Grew Up: C.V. Jim Woolridge, Flatt’s, Smith’s Parish

I had a wonderful upbringing,” says former minister C. V. Jim Woolridge. “I had a great childhood—I had everything.”

Born August 19, 1926, to George Philip and Lilian Edith Woolridge, he was named Clarence Vernon. “But my father looked at me when I was six weeks old and thought I couldn’t go through life called Clarence Vernon,” he laughs. “So he called me Jim.” Woolridge was the youngest of six boys and in addition had two older sisters and two younger. His father, nicknamed Jack, was also a member of a large family. But, sadly, Jack was five months old when his mother died and he was five years old when his father died. His four brothers and two sisters raised him. His life cannot have been easy, but as Woolridge says, his father always worked very hard and by the time Woolridge was born had his own cottage and land which he farmed.

“We had cows and my dad had half a dozen horses,” Woolridge says. “I rode all the time—all through the hills and on the beaches. On the weekends my friends from Berkeley would come and ride on the field below—I taught them how to ride.”

He still vividly remembers the horses. “They were wonderful—they seemed to love being ridden. You could always tell when they were happy. There were Jimmy, Bessy, Zady and Tom Watts, a light bay—he was a beautiful trotter. Oh, he could trot. He was a carriage horse.”

When Woolridge was older, on Sundays and in the summer holidays, he drove tourists in a horse and carriage because his father also had a livery business in Flatts. And his riding skills eventually led him to being accepted as the first black member of the Hunt Club.

Because of the farm there was always plenty to eat. “We never knew what it was to buy milk, vegetables, anything of that nature. It was all on the property. We would share—if anyone came to the house my father would say, ‘Go and pick Mrs. so-and-so a bunch of carrots.’ And there was always plenty of food for the unexpected guest.

“My mother made the most beautiful cake. She was a great baker—she baked ten loaves of bread every Wednesday and Saturday. We always had gingerbread. I’ll never forget—Tuesday was soup day. Sometimes she’d put dumplings in it and they stuck to your ribs. Sometimes it would be lima bean, sometimes green pea. She’d rotate them. Sometimes she put in chicken and that was delicious. For breakfast we had pancakes, eggs, sausages. And when we were at school in Flatts, we’d come home for hot soup for lunch. This was the way of life.”

Nevertheless, idyllic though his childhood was, he was always expected to pull his weight. “I rode a bicycle to the Berkeley Institute,” he recalls. “But before I left, I used to have to milk two cows every morning, take them out, clean out the stables, feed half a dozen or more pigs and feed the chickens.

“One day I said to my father, ‘My friends walk around days—they don’t have to do these things—why do I have to do it?’

“My father said, ‘Sit down. I knew this was coming.’ He said, ‘You milk those cows. Have you ever known us buy milk for the family?’

‘Those pigs you don’t want to feed. Every time I sell one of those pigs the revenue from that helps to support the family for at least two weeks.’

“And he went right down the line and gave me all the various things I was involved in and when he got through, he said, ‘Now, do you have any questions?’ I said no.

“He said, ‘Well, where the hell do you think the money comes from? When someone wants you to drive tourists in the carriage, have I ever failed to give half of what your fare is?’ I said no.

“And it was true,” Woolridge continues, “that never once did I ask for five or ten shillings, did he question me what I wanted it for.”

And also, once in a while, he spent it on the movies. “There was a movie theatre upstairs in a building in Flatts. It was racially segregated with a dozen seats elevated at the back of the room. I sat in the front or on the floor. And there were movies at the Whitney School and that was segregated again. It’s funny how you don’t think of those things anymore.”

But racial segregation was a reality of his childhood and early adulthood. The Whitney School was for white students only. He spent his primary education in St. Mark’s School, now a private residence in Flatts, and then at the Elliott School on Jubilee Road. Segregation also applied to the family church, St. Mark’s, where the black and white congregations sat in separate areas for church, Sunday-school classes (classes for whites were held at the Whitney, classes for blacks at St. Mark’s) and annual Sunday-school picnics. And yet, he explains, it did not exclude friendships with white families.

“My father worked for the Trott family as a young fellow and he grew up with Sir Howard Trott. They were great friends. I couldn’t go to Whitney but a lot of my best friends could. My father had bought his land from Will Zuill on the hill. His sons, Jim and William, were wonderful people, they were my friends. Later I bought my land from Jim Zuill. And Ann [their sister] spent more time in my house than her own. My sister Louise was her second mother. She raised the two boys and they were down here as much as I was in my own house. They were all great friends. I maintained that type of relationship into adulthood with Dr. Peter Outerbridge, Robbie Outerbridge and with the Zuills.”

Once he was an adult, racial discrimination would impact him when seeking a position as a dental technician after he graduated from the New York School of Dental Technology and the Kerpal Graduate School. But he refused to react in a negative way. “I’ve never, never carried bitterness. There are only two things I’ve got to do—stay black and die. I love me. If you have regard for yourself, you cannot allow those negative things to impede you from being the person you can be.”

However, after studying and working abroad where such segregation did not happen, he found the segregated Sunday-schools at St. Mark’s unacceptable. After an announcement in the church by Canon Ross that the white children would attend Sunday school at Whitney and the “coloured” children at St. Mark’s, he walked out and left the church. He joined his wife’s church, the St. John’s A.M.E. in Bailey’s Bay, becoming a member of the choir. Later, once the segregation practices were lifted, he was able to accompany his grandchildren to St. Mark’s.

When Woolridge was a child and a young man, he played a lot of sports. “At Berkeley I was champion at track and field, I liked hurdles and I played soccer at midfield.”

But it should come as no surprise that The Voice of Summer’s great passion was cricket. Nor did it hurt that the family home overlooked the Flatts Victoria cricket ground where he could practise.

“I had the pleasure of playing cricket with my second oldest brother, Henry, for the Flatts Victoria Cricket Club at an Eastern Counties game when I was 15. We were both at the wicket. Thousands of people were watching and cheering—it was great. In those days Flatts Victoria was the largest field the Eastern Counties had to compete on. Surprisingly enough with those small fields there were very few large scores—probably because they had better bowlers!”

During the summer he also enjoyed diving for coral off Harrington Sound. “As soon as school was out, I’d go with my three brothers. We’d boil the different corals and the sea fans, bleach them and display our merchandise by the train station in Flatts.” His customers? Tourists alighting from the train at the aquarium. “We made $15 a day and that was a lot of money in those days.”

Sometimes during the holidays he would race other boys from the Green Lantern (now Rustico Restaurant and Pizzeria) to the jetty, jump off and swim back. “The first one back got the dollar.”

Another pastime happened by accident. “There was a fellow named Jack Peacock Green who was the manager of the Coral Island Club, previously Frascati [now St. James Court]. He’d have fantastic entertainments and an amateur hour. People would come in their boats from Riddell’s Bay and Cambridge Beaches and park their boats to spend the evening there. Those participating in the amateur show used to congregate in a room with sliding glass doors. My friends—Dicky Burchall, Donuts Raynor and Spider Blakeney—and I were looking through the window and that was taboo!” Sergeant Amos, a policeman who lived on Harrington Sound, caught them.

“He grabbed us by the scruff of our necks and said, ‘Don’t you know what you’re doing is against the law?’ We said we were going into the show because we could sing.” (In fact, they could—they used to harmonise and would knock on people’s doors in the neighbourhood, then sing and receive fifty cents or two shillings and sixpence for their performance.)

“So Amos took us in and we came second! We got about $10 each. The following week we came back and we won! We got $20 each. A policeman,” he adds, “was more like a family friend. If a boy did something wrong, he took the boy to his father and let him deal with it.”

The whole neighbourhood helped as well. “If someone saw me acting in a manner they didn’t think was appropriate, I’d know about it at home. It all helped you become a responsible person.”

And where his parents were concerned, there weren’t the beatings that many other Bermudians of the same era recall. “I can honestly say I cannot recall any heavy beating or abusiveness on the part of my parents to any of us. That’s because we had a profound respect for the home, for the house and for our parents as individuals.”

He remembers family dinners starting at 6:30 p.m. at a long table with benches either side and room enough for the large family. His parents would sit at each end.

“My dad was a great guy. He loved to sing and he loved to talk. It wasn’t uncommon that at 9:00 p.m. we were still listening to him talking about life. And it wasn’t uncommon for the radio to be on and my father would be the first to dance.”

At least two of the brothers (though not Woolridge) played the piano and everyone sang and harmonised.

“The Woolridge Choir,” he smiles. “It was a wonderful way of life.”

The Hon. C. V. Woolridge served as Member of Parliament for the United Bermuda Party from 1968-2001. He was twice minister of tourism and served as minister of labour and immigration, minister of works and engineering, as government whip and as deputy premier for four years. Famous for his cricket radio broadcasts, he is Bermuda’s Voice of Summer. He received his CBE in March 2000.