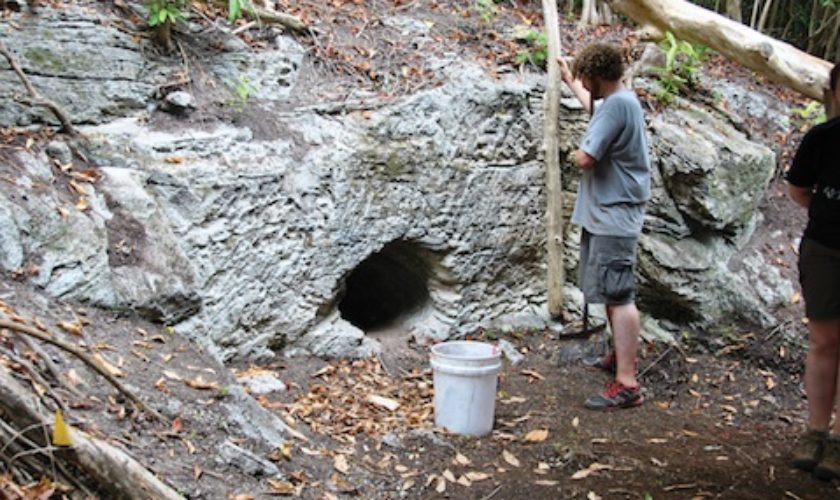 Digging Up the Past

Archaeology is a uniquely important part of the historic preservation process. The Archaeological Research Committee at the Bermuda National Trust is a very active volunteer group undertaking archaeological excavations of historic houses and properties throughout the island, more often than not, partnering with internationally recognised archaeologists and institutions. A recent partnership with Dr. Michael Jarvis and his field school from the University of Rochester has literally uncovered some of Bermuda’s earliest history on an out-of-the-way island in St. George’s Harbour.

Lying between St David’s and Paget Islands and comprising 61 acres, Smith’s Island has figured in Bermuda’s history from the earliest days. It was home to the island’s three original residents – Christopher Carter, Edward Waters and Edward Chard, the sailors left behind (with the ship’s dog) after the wreck of the Sea Venture when the rest of the crew left Bermuda for Virginia in 1610. It was also briefly the seat of the first government when Bermuda was originally settled in 1612. Over the years it has been the location of an agricultural station, a tobacco grower’s dwelling, a genteel Georgian mansion, a whaling station, a smallpox quarantine camp and a plant nursery. Despite all that history, Smith’s Island is mostly undeveloped today and provides a dreamscape for archaeologists.

In the summer of 2014 we made a visit to Smith’s Island to see what the archaeologists were up to – or should I say “down to”. Once landed on the island, we were struck by the exceptionality of this special place. The sounds of traffic are ever so faint in the distance across the harbour and the smells and sounds of nature abound. The single dirt road in the middle of the island is dotted on either side with homes and each one seems to support a myriad of square-foot gardens thriving with herbs, vegetables and fruit. There are solar panels and ingenious water catchment systems, orchards, banana groves and spectacular flower beds and shrubs in every backyard space. Further along the road is the community garden, a large piece of arable land where the islanders all work together to grow and harvest crops.

The road suddenly narrows and disappears into woodland, and after meandering for a short time, brings us out to the first of four 2014 excavation sites: the Oven Site. The location matches a building marked on John Speed’s 1625 map, reflecting Richard Norwood’s 1616 survey. This summer the archaeological team matched the site scientifically. It is very likely the oldest known dwelling in Bermuda, occupied between 1614 and 1616. The painstaking activity of cautiously scraping and brushing away the ground cover, detritus, underlying dirt and rubble to expose the original dirt floor of the old house has taken five years and was no easy task, but it has taught us much about this early timber house and who may have lived there. These early settlers, for example, apparently dug down two or three feet into the ground before building up walls, making less work for themselves and potentially protecting the lower-profile house from wind and storms.

The original 400-year-old dirt floor can now be clearly seen along with a primitive fireplace and oven carved out of the bedrock, complete with an above-ground flue at the top of a quarry cut. Clearly visible in the dirt floor are a series of holes where posts once stood to hold up the wooden roof and gable ends.

With every scoop of dirt carefully sifted and inspected for artifacts, the team can learn much about how the early settlers built, what they traded and how and what they ate. Within the carved-out fireplace an accumulation of fish and bird bones was uncovered. The most intriguing, and perhaps most telling, items found in the floor layers of the dig, were flakes of chert (a type of stone) and the tip of a chert projectile point which had been pressure-flaked on both faces to create a serrated cutting edge. Chert is not a stone found in Bermuda and this discovery led the archaeologists to identify the house as most likely that of Boaz Sharpe, who at the time of his death in 1707 shared his home with nine Native American slaves. Metal knives were available during this period, so the chert arrowhead indicates that the stone was acquired in North America and brought to Bermuda as a cultural artifact rather than a necessity. A bone-handled knife, a pricey utensil that belonged to one of the first residents, the commander of Smith’s Fort, was found in the lower layer as well. Pieces of earthenware not made after 1620 were also found, along with Metropolitan ware, a type of pottery made only between 1630 and 1660, suggesting a long occupancy of this house until around 1710 when it was apparently abandoned.  The hundred-year-old timber house was then likely wiped out by the hurricanes of 1712 or 1714.

We follow our leader through the bush and along less-travelled paths in the woodland to the Cave Site, a rocky outcrop overhanging rich soil. To the archaeologists it suggested a refuge where early settlers could shelter from wind, rain and storms. Sure enough a closer inspection of the cave revealed that its overhanging roof had been scraped and carved on the underside to provide more headroom. Someone had gone to a lot of trouble to make this cave liveable. Furthermore, there were carefully carved out shelves on an interior wall of the cave. Once the excavation began, a post hole was found outside the cave entrance, perhaps used to hold up a “blind” or hidden front wall to this part of the cave. The archaeologists found numerous mammal and fish bones reflecting the diet of people who used the cave, but no evidence of cooking as there was no smoke staining within the cave. Three shards of Astbury ware, refined earthenware produced between 1725 and 1750, provide the only dating clue so far. Such ceramics were fit more for the tables of rich St. George’s merchants than for a rustic cave dwelling, but as this excavation is in its early stage we will have to wait for Dr. Jarvis and his team to return next summer to discover more about who might have lived in this cave.

Another hike through the trees and we arrive at Cotton Hole Bight where Dr. Jarvis had hoped to find evidence of Carter, Chard and Waters setting up the first Bermudian homestead. This “house” had been built into the hillside adjacent to a valley leading to a sheltered bay with ready access to the open reefs, a perfect location for our first settlers to set up their tobacco and provision fields and build and launch their boats, all the while keeping a watchful eye on the ocean approaches to the island.

At this site, an even larger hearth and oven were discovered carved into the back wall of the dwelling. An excavated test pit revealed a curious basin or water catchment carved out of the bedrock which contained a mature boar’s tusk. As excavations continued, the team found they were digging through rubble that was backfill from an early eighteenth-century quarry where an abundance of eighteenth- and nineteenth-century ceramics, glass and pipe stems were unearthed. While the group did not find evidence of the dwelling of the first settlers in Bermuda, they are not giving up and plan to extend this excavation next year.

Our next trail took us to the fourth and final site‚ÄîSmall Pox Bay, where standing in the woodland is an old stone ruin. It was thought this site was used as a quarantine house for sailing vessels arriving in Bermuda with sick passengers or crew. From the 1730s onward any passengers with symptoms of illness were not allowed to land on the main island but instead had to check in for quarantine. The name of nearby Small Pox Bay and the close proximity of this structure make for a probable link. Interesti
ngly, the 2013 dig at this site did not unearth any medical supplies or any evidence of cooking which one would expect in a place of convalescence. Discoveries made in 2014 include regiment buttons, suggesting the building was used by soldiers of the 20th and 56th Regiments. It is now thought that Smith’s Island could have been one of a few islands where garrison soldiers fled to distance themselves from yellow fever when it afflicted Bermuda. Occupancy by the Royal Navy or other imperial agent is suggested by an inscription on the interior north wall with the carved royal cipher GR with a broad arrow below. On the western wall, additional smaller inscriptions are clues that still need to be deciphered.

A small cast toy cannon and clay marbles found at the site suggest the presence of children at some point; the site was clearly used intensively in the second quarter of the nineteenth century, based on artifacts of Annular ware and other ceramic types. The interpretation of Small Pox Bay is further complicated by the discovery of post holes below the soil surface, two of which were clearly sealed under a wall of the stone building which confirms there was a wooden structure predating the stone ruin. A search in the vicinity led to the discovery of a midden (a mound or deposit containing shells, animal bones and other refuse that indicates human settlement) which turned up a bucketful of ceramics and artifacts scattered on the hillside halfway between the ruin and Small Pox Bay.

With more than just one time period to consider, and perhaps more questions than answers at this point in the excavation, there are many more stories waiting to be told – and much work still to be done.

“Archaeology,” as Dr. Jarvis explains to his students, “has little to do with Indiana Jones or Lara Croft and is hardly the romantic action-packed enterprise that movies present. This field school is both physically and mentally challenging and involves meticulous attention to detail in the archives, field and lab.” Despite this warning from their scholarly professor, all the University of Rochester field school students – and the local volunteers – thoroughly enjoy the experience of the Smith’s island archaeology dig every summer.

The Smith’s Island Project is making some of the most exciting discoveries in Bermuda’s history. We are indeed fortunate to have Dr. Jarvis returning year after year, uncovering the layers of our past and matching clues to give us insight into how our forefathers lived on these islands. It is fascinating, and we can’t wait for the story to continue next summer. The Bermuda National Trust is proud of this partnership and grateful for the many volunteers, donors and supporters of the Smith’s Island Project.